One way to tell that this video is fake is that the size of Zelenskyy's head is disproportionate to that of his body. 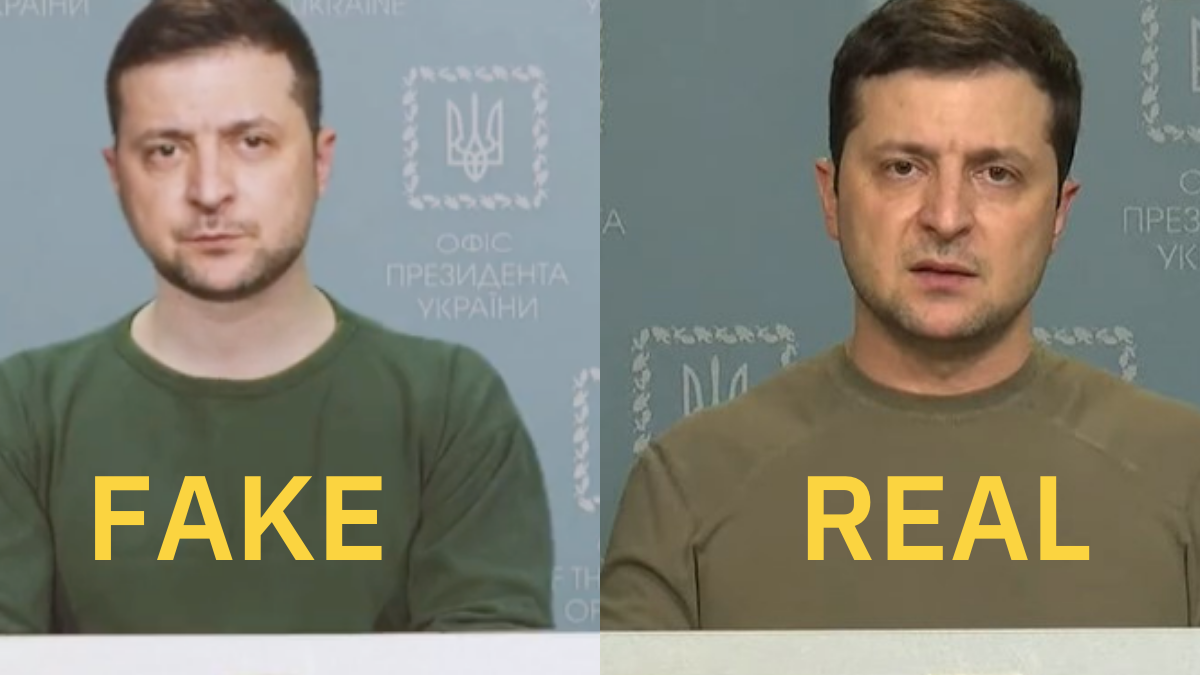 A poorly done deepfake video of Ukrainian President Volodymyr Zelenskyy asking civilians to lay down their arms to the Russian military was circulated on social media in March 2022. In addition to getting some views on social media, a summary of this video was also broadcast on a Ukrainian news station after it was reportedly hacked. The running text at the bottom of this broadcast mentions the message from Zelenskyy's deepfake video.

Ukraine 24 posted a message on Facebook stating that this message was added to the broadcast after the network had been hacked:

The message reads in English (translated via Google):

The running line of the "Ukraine 24" TV channel and the "Today" website were hacked by enemy hackers and broadcast Zelensky's message about alleged "capitulation."

Friends, we have repeatedly warned about this. No one is going to give up. Especially, in the circumstances when the Russian army suffers losses in battles with the Ukrainian army!
· ·

Zelenskyy, too, appeared to address this rumor in a video posted to his Facebook page. That video included the caption "Ми вдома і захищаємо Україну" or "We are at home and defending Ukraine" and, according to Ukraine 24, a message to Russian soldiers to lay down their arms.

How To Spot a Deepfake Video

This likely isn't the last deepfake video we will encounter during Russia's invasion of Ukraine. Propagandists have been working overtime to change the narrative of the war, and deepfakes, a term used to describe digitally edited videos to make it seem as if a real person is saying or doing something they never said or did, are just another tool in their disinformation toolbox.

In the example above, most viewers can likely tell that the Zelenskyy footage is fake simply by looking at it. His head, for example, doesn't seem to quite fit on his neck. The best strategy to identify deepfakes, however, is to look for their source. Zelenskyy has recorded several videos using the same background on his social media profiles and on the official social media pages of the Ukrainian government. This deepfake, needless to say, was never posted to these pages.

CNN, Tim Lister and Sebastian Shukla. “‘We All Will Be Judged.’ Russian Prisoners of War Voice Disquiet, Shame over War in Ukraine.” CNN, https://www.cnn.com/2022/03/15/europe/ukraine-russian-prisoners-of-war-intl/index.html. Accessed 16 Mar. 2022.

Previous Article
Next Article
Article 11 of 13 in Collection