How Trump is Carving His Name Into the 2022 GOP Primaries

From the sidelines, the former president is pulling strings and serving up revenge. 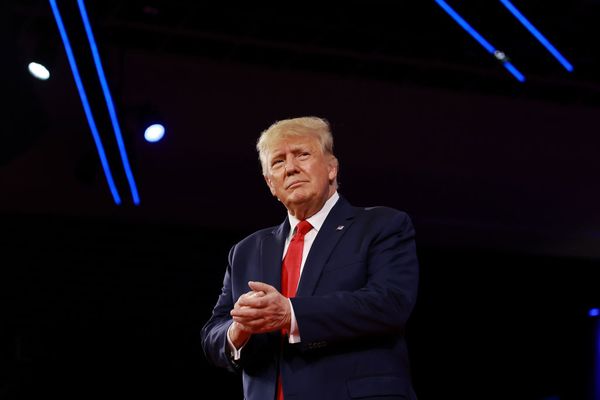 Among the many sub-plots and narrative threads of this year's mid-term primaries, one of the most intriguing is the involvement of former President Donald Trump. In principle, at least, he has been shifted to the sidelines of the American political arena — banned from the most popular social media platforms, not actively running for office, and not dominating cable news as he had for the previous five years.

And yet, he looms large over the Republican party's primaries, with candidates scrambling to secure a photo-op, some face time at Mar-a-Lago, or best of all, an endorsement and a rally.

At times, Trump has wielded those endorsements like daggers, "endorsing against" Republicans who dared to cross him in 2020 or 2021. But he has also appeared strategic at times, withholding or delaying his endorsement, or leveraging it to ease candidates out of play.

Snopes has closely examined the former president's Republican primary endorsements and pronouncements from recent months, and identified some intriguing trends. Here's what we found. For the most part, Trump has been either explicit in describing, or transparent in demonstrating, his motivations for attacking certain Republicans, and endorsing their opponents: revenge against those who crossed him on the two subjects that appear to have occupied his thoughts for 18 months. Those are his failed re-election bid in 2020, and Republican support for his impeachment after some of his followers stormed the U.S. Capitol to prevent the certification of President Joe Biden's victory.

In particular, U.S. Reps. Liz Cheney, of Wyoming, and Adam Kinzinger, of Illinois, have been the subject of relentless ridicule and ad hominen attacks from Trump, ever since they crossed the aisle to vote in favor of his second impeachment, in January 2021, on a charge of incitement of insurrection.

The former president endorsed Cheney's primary opponent, Harriet Hageman, at the earliest possible opportunity — the day she announced she was running, in September 2021. In "endorsing against" Cheney, as it's known, Trump has labeled her a "warmonger and disloyal Republican" and a "warmongering fool." Cheney appears to be facing an uphill battle to keep her seat. In February 2022, a straw poll of Wyoming GOP activists suggested Hageman held a resounding lead, less than six months out from the August primary.

In October, when Kinzinger announced he would not run again, Trump appeared to revel in the possibility that his revenge attacks had weakened Kinzinger's appetite for a re-election bid, even if redistricting appeared to play a telling role.

The Republican primary in the Georgia gubernatorial election is another fascinating race. Incumbent Brian Kemp, running for reelection, became one of Trump's favorite GOP targets after he formally certified the state's election results in November 2020, giving Biden 16 additional electoral college votes and dealing a major blow to Trump's hopes of a path to victory in an election he had clearly already lost.

Over in the Pacific Northwest, in Washington's 4th Congressional District, four-term incumbent Republican Dan Newhouse faces a MAGA backlash of his own. In the bitter and uncertain weeks that followed Biden's victory over Trump, Newhouse joined with dozens of Republican House members in filing an amicus curiae brief before the U.S. Supreme Court in Texas vs. Pennsylvania — an unsuccessful bid to prevent key swing states including Pennsylvania and Michigan from certifying Biden's win.

However, despite joining in that courtroom effort to keep Trump in office and fight off Biden's inevitable victory, Newhouse later committed the cardinal sin of voting for Trump's impeachment. Seemingly horrified by the events of Jan. 6, Newhouse wrote:

This is also a vote to condone President Trump's inaction. He did not strongly condemn the attack nor did he call in reinforcements when our officers were overwhelmed. Our country needed a leader, and President Trump failed to fulfill his oath of office.

That was enough to set several GOP primary challengers against Newhouse, and in February 2022, Trump finalized his choice, endorsing Loren Culp — a former small town police chief and unsuccessful Republican gubernatorial candidate in 2020. In a statement, Trump was scathing, calling Newhouse "absolutely terrible" and saying he had "joined the Radical Left Democrats to vote for the Impeachment Hoax, angering his constituents and causing the Republican Party of Washington to totally rebuke him." The Washington 4th district primary takes place on Aug. 2.

'My Complete and Total Endorsement'

That rollercoaster of loyalty and recrimination is not unique to Newhouse. During this cycle, several Republican candidates have found that when it comes to Trump's support and endorsement, it can be a case of "easy come, easy go."

In 2019, for example, Trump nominated Tom Leonard — a former prosecutor and Michigan House Speaker who had run unsuccessfully for Attorney General — to be U.S. Attorney for the Western District of Michigan. His appointment was blocked by the state's two Democratic U.S. senators. When Leonard ran for Michigan Attorney General in 2022, one might reasonably have expected Trump to offer his support and encouragement once again. Instead, he enthusiastically backed Leonard's primary opponent.

In this case, it seems that Leonard's major sin was not necessarily opposing Trump's claim to the 2020 election, or supporting his impeachment — we couldn't find a record of any such statements by Leonard — but simply not being as gung-ho as Trump's candidate of choice, a previously unknown attorney named Matt DePerno.

In 2020, DePerno achieved a measure of fame when he filed a lawsuit challenging the outcome of the election in Antrim County. He has been unapologetic in advancing numerous electoral conspiracy theories, and has succeeded in gaining Trump's endorsement — an immeasurably valuable boost to a campaign that would otherwise surely have had little chance of succeeding.

In February 2022, Trump sent a remarkable letter to Michigan GOP delegates, beseeching them to choose DePerno over Leonard, whom he dubbed "an absolute embarrassment to the GOP," "part of the Establishment for 20 years," and — using his new insult of choice — a "RINO" or "Republican in Name Only."

Two years ago, South Carolina State Rep. Nancy Mace ran as a Republican for the state's 1st Congressional District, and received the boost of a "complete and total endorsement" from the sitting president. When she won the Republican primary, Trump declared her "a Great Warrior who we need in Washington now," and in a speech on Sept. 8, Trump addressed Mace in the audience and said, smilingly "We're behind you a thousand percent, you know that":

However, the Jan. 6 attack on the Capitol proved a turning point for Mace, and she appeared several times on cable news, criticizing "fringe" Republicans for attempting to overturn Biden's victory and cynically firing up grassroots Trump supporters. In her maiden speech after her swearing in as a House member, Mace said:

"I believe we need to hold the president accountable. I hold him accountable for the events that transpired for the attack on our Capitol last Wednesday."

One year later, Trump was rolling out the red carpet for Mace's primary challenger Katie Arrington. In endorsing Arrington, Trump described Mace as "absolutely horrendous" and "an absolutely terrible candidate ... whose remarks and attitude have been devastating for her community, and not at all representative of the Republican Party to which she has been very disloyal." Trump offered Arrington what he had pledged to Mace less than two years earlier — his "complete and total endorsement."

Trump himself can often be relied upon to provide an unreliable account of his own accomplishments, and we have found some intriguing examples where he has, in his endorsements, very clearly lacked the Midas touch. However, on the whole, the former president does indeed appear to be exerting a measure of strategic control and outsized influence in the GOP's primary campaign. The Ohio Senate race offers a perfect illustration of that trend.

On Feb. 4, businessman Bernie Moreno announced he was withdrawing from the Republican primary for the U.S. Senate seat of the retiring Rob Portman. Typically, when flagging candidates pull out of elections, they mention prayerful reflection, heartfelt conversation with their loved ones, and so on. In the case of Moreno, he appears to have consulted one man, and one man only. He wrote:

I asked for a private meeting with President Trump this afternoon to discuss the state of the Ohio Senate race. I am a businessman, not a politician. Business leaders recognize patterns before they happen. After talking to President Trump we both agreed this race has too many Trump candidates and could cost the MAGA movement a conservative seat.

...Therefore, today I am ending my U.S. Senate campaign and will return to the private sector. I will focus my efforts on supporting the candidate that wins President Trump’s endorsement.

In return for this act of self-sacrifice, Moreno received from Trump what the conservative columnist David Frum described as "a pat on the head." Trump wrote:

"I would like to thank him for his time and effort, and that of his wonderful family. I was very impressed with Bernie ..."

In South Carolina's 7th Congressional District, a similar sequence of events played out. On Jan. 28, U.S. Army Veteran Graham Allen pulled out of the GOP primary to unseat incumbent Tom Rice, who was one of just 10 Republican representatives to vote in favor of Trump's second impeachment, and provoked the wrath of Trump and his supporters.

President Trump has already endorsed against Liz Cheney and most of the other impeachment RINOs. And he will endorse against Tom Rice soon enough. When he does, we must be united.

So today, in recognition of the fact that there is now a viable candidate who is worthy of President Trump's support and who the voters' trust, I am announcing that I am immediately suspending my campaign for Congress and will give my full support to the challenger to Tom Rice that President Trump endorses.

However, Trump's record as a "candidate whisperer" and strategist has not been flawless. In the North Carolina Senate race, for example, Trump has endorsed U.S. Rep. Ted Budd, with former Gov. Pat McCrory running as a more moderate Republican option, and former Congressman Mark Walker battling with Budd for the "America First" vote.

In March 2022, Politico reported that Budd, although still polling in second place to front-runner McCrory, was losing ground to Walker. "We gotta get Walker out of that race," Trump reportedly told GOP donors at a dinner. In December, according to Politico, Trump invited Walker to Mar-a-Lago and attempted to strike a deal that would see him withdraw from the primary. Walker appears to have rebuffed him and as of mid-March, he remains an active candidate, throwing a spanner in Trump's North Carolina masterplan.