Stories shared on social media claimed that Black slaves would create maps in cornrows to help others escape slavery in the South. 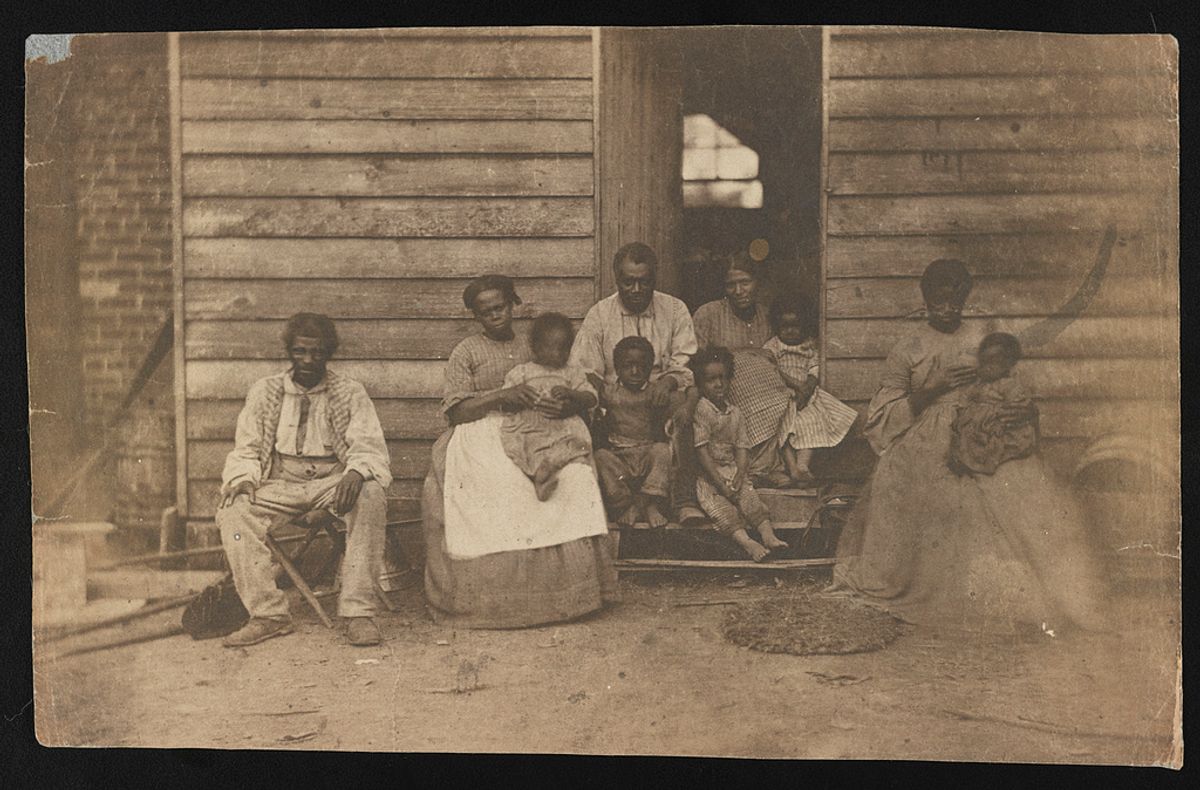 Some stories have value, even if we as fact-checkers can’t verify their authenticity.

The legend of cornrows and braids hiding maps and messages to freedom is both an idealistic tale, and indicative of the very real resilience of slaves living under brutal circumstances. The story mirrors others that seek to show slaves’ ingenuity, like one that claimed messages encoded in quilts helped slaves escape to freedom on the Underground Railroad.

In February 2022, the African American Art & More Facebook page published a post about how Black slaves purportedly passed along maps and other information in cornrows to help them escape to the North.

Did you know Cornrows were used to help slaves escape slavery?

Slaves used cornrows to transfer information and create maps to the north.

Since slaves were not allowed to read or write they had to pass information through cornrows.

It is believed to have originated in Colombia, South America where Benkos Bioho, in the late 1500’s came up with the idea to have women create maps & deliver messages through their cornrows. They were also called “canerows” to represent the sugarcane fields that slaves worked in.

One style had curved braids, tightly braided on their heads. The curved braids would represent the roads they would use to escape.

Also in their braids they kept gold and hid seeds which helped them survive after they escaped. They would use the seeds to plant crops once they were liberated.

Cornrows was the best way to not give back any suspicion to the owner. He would never figure out such a hairstyle would mean they would escape or the route they would take. #BlackHistoryMonth

One copied version of the post was shared more than 4,500 times. Several other posts with similar information information were shared at least hundreds of times each. We looked back and found that we had been receiving reader inquiries via email that asked about the subject since at least 2016. A reader also posted about this rumor in our Snopes Tips Facebook group.

We read a number of accounts, and found no tangible evidence of slaves in the U.S. actually using cornrows to convey messages. But this doesn’t mean that these stories should be disregarded, or that the practice never existed.

“When fugitive slaves figured out how to get themselves from place to place, they were incredibly brave and heroic people. That’s the core message and that's true,” Patricia Turner, folklorist and professor of African American studies at University of California Los Angeles, told us.

“[These are] kind of urban legends that [serve a] function of giving particulars to generalities. Slave messages on quilts and cornrows [...] make concrete [or] give a story to something that is ultimately very true in my mind,” she said.

The first slaves arrived in Colombia around the beginning of the 16th century. Most were brought by the Spaniards who colonized the area. [...] But groups of slaves escaped and found refuge in areas that were geographically remote. In these areas, once thought to be uninhabitable, groups of runaway slaves thrived and built communities. The populations of these areas — including Choco, where Asprilla Garcia is from — have been mainly black for hundreds of years.

In the time of slavery in Colombia, hair braiding was used to relay messages. For example, to signal that they wanted to escape, women would braid a hairstyle called departes. “It had thick, tight braids, braided closely to the scalp and was tied into buns on the top,” Asprilla Garcia says.
[...]
“And another style had curved braids, tightly braided on their heads. The curved braids would represent the roads they would [use to] escape,” Asprilla Garcia says. “In the braids, they also kept gold and hid seeds which, in the long run, helped them survive after they escaped.”

“Why did they not speak the messages?” someone asks.

“By that time, a lot of the owners understood their language,” Asprilla Garcia says. The message in the women’s braids “was the best way to not give back any suspicion to owner. He would never figure out such a hairstyle would mean they would escape.”

The practice of hiding seeds in hair was mentioned in the book “Black Rice: The African Origins of Rice Cultivation in the Americas,” by Judith Carney, a professor of geography at UCLA. She wrote about the possible African origins of a rice found in the South American country of Suriname:

The centrality of rice for cultural identity in maroon history is also captured in legends recounted by their descendants, who claim their ancestors introduced the crop from Africa. In the area of Cayenne where a French agronomist found the Baga varieties, the Djuka maroons maintain that rice originally came from Africa, brought by female slaves who smuggled in their hair grains from the slave ships that transported them to the New World. If the legend is literally accurate, these must have been seed grains.
[...]
In studies of a separate maroon group, the Saramaka of Suriname, anthropologist Richard Price records a similar legend, where the presence of the crop is attributed to female ancestors’ hiding rice in their hair as they fled sugar plantations to freedom.

The use of hair to convey messages or hide grains of rice is so prevalent in oral retellings that the lack of documentation feels beside the point.

Even without proof of its authenticity, Turner says the practice made some sense in the U.S. “People felt Black bodies belonged to them. If [Harriet Tubman] had been searched there would have been no reservations about stripping her. The possibility that at some point someone may have hid something in their hair, I can't argue against [...] because it does adhere to some kind of logic at the time,” she said.

While there is not a lot of definitive research out there about cornrows, historians have been interrogating the myth of messages in quilts for a while. Numerous experts argued that such ideas were too fanciful a construction. Historian Fergus M. Bordewich wrote in a New York Times opinion piece in 2007:

Few aspects of the American past have inspired more colorful mythology than the Underground Railroad. It’s probably fair to say that most Americans view it as a thrilling tapestry of midnight flights, hairbreadth escapes, mysterious codes and strange hiding places.

So it’s not surprising that the intriguing (if only recently invented) tale of escape maps encoded in antebellum quilts — enshrined in a metastasizing library of children’s books and teachers’ lesson plans and perhaps even in a Central Park memorial to Frederick Douglass — should also seize the popular imagination.

In her book, “Crafted Lives: Stories and Studies of African-American Quilters,” Turner interrogates the mythology around the quilts, and points out that they grew popular from children’s stories and oral history. In the 90s book, “Sweet Clara and the Freedom Quilt,” a young slave uses scraps of cloth to fashion a map on a quilt, something her master would never recognize.

We prodded Turner further on whether we could definitively answer the question posed in this article, but she preferred to focus on the attention that legends like this brought to the real stories of the resilience of Black slaves. “I am reticent to say anything too concrete, because I want lay people to want to know more about what life was like for enslaved people,” she responded. “There is no real value added to harshly saying “no” to a story.”

“You can couch your language [and say] ‘Well, no slave narrative covers it.’ Others will say, ‘Well that doesn’t mean it didn't happen,'" she continued.

And ultimately, stories are often told by people in positions of power, something that Turner believes the tales of the quilt and cornrows push back against. She said:

One of the common denominators between the two stories is they focus on African Americans using their own resources for emancipation. If you look at stories that can be substantiated about the Underground Railroad, a lot of focus is on the white savior. The abolitionist or white conductor or Quaker, the parties that came in and helped the slaves, history gave a lot of attention [to them] as heroes. You could argue [they got that attention] because if ‘mainstream culture’ was white, and you depict white slave owners as evil, you want children to not have a negative view of white people. You make sure there are heroic white people too. At the end of the 20th century, Black people were telling the story and they were making the Black person the complete hero. You need narratives that reinforce the bravery of the Black people themselves. [These stories] come about at a time when talking about what Black people brought to the table was important politically, sociologically and economically.

While we cannot definitively answer the question of whether this was a real practice by slaves fleeing captivity in the American South, we can point to the rich and varied tales surrounding a real movement toward emancipation. Those stories certainly matter to people, hence their continuing popularity today.