Who Is Satoshi Nakamoto?

Will the real Satoshi Nakamoto please stand up? 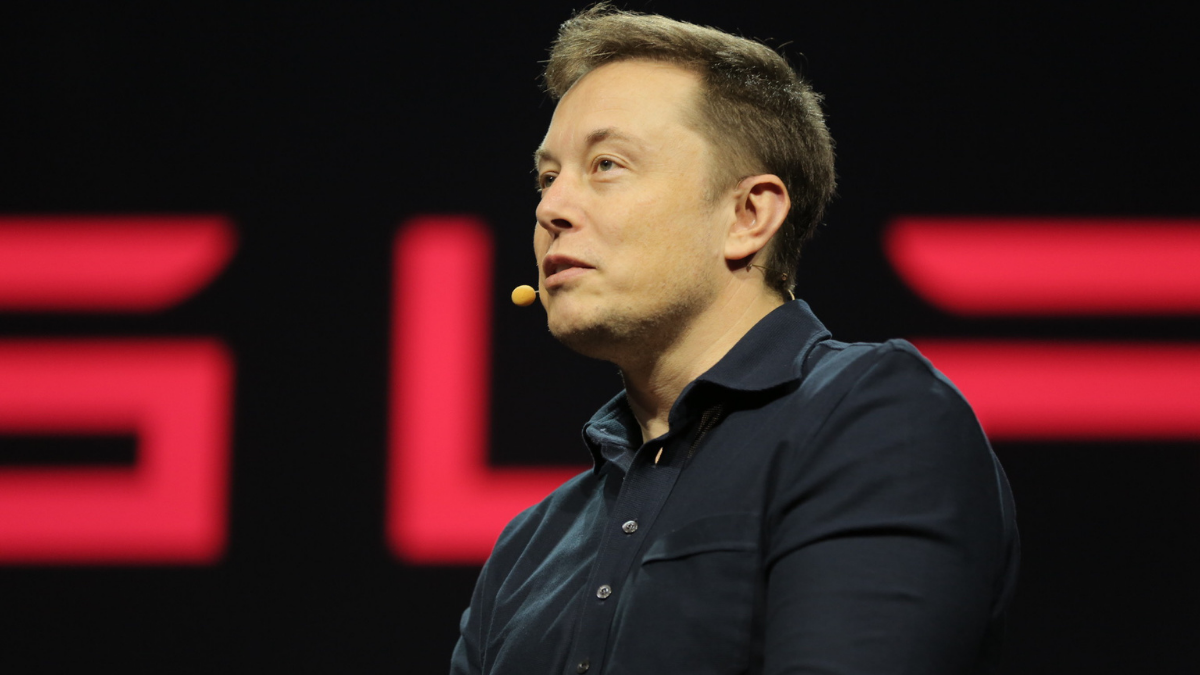 In March 2022, Tesla founder Elon Musk posted a message on Twitter that humorously suggested the answer to a question that bitcoin users have been wondering about for the last decade: Who is Satoshi Nakamoto? Musk's tweet wasn't accompanied by any text, so it isn't entirely clear what he was suggesting in this photo. By the looks of it, one could surmise that Musk is suggesting that Satoshi Nakamoto was invented by the four technology companies listed. In all likelihood, however, this picture was posted as a simple joke. Still, that begs the question ...

Who Is Satoshi Nakamoto?

Satoshi Nakamoto is a pseudonym for the person or persons who created bitcoin. The Guardian reported in 2021:

Nakamoto is the person or persons who developed bitcoin. They are anonymous and pseudonymous.

They created a decentralised, digital commodity which is now worth more than a trillion dollars globally. It is a peer-to-peer way of transferring money, skipping the banks. It’s encrypted with blockchain technology, which creates digital signatures to prove where the bitcoin has come from.

People have been trying to figure out Nakamoto's real identity since publication of the paper "Bitcoin: A Peer-to-Peer Electronic Cash System" on a cryptography mailing list in 2008. While several people have claimed to be Nakamoto, this person or persons' identity is still a mystery.

While a number of people have made this claim, there's no real evidence to suggest that Musk is Nakamoto. Musk has denied these claims in the past. In 2017, for example, he posted on Twitter that the claim he was Nakamoto was "not true."

Another popular claim is that Musk knows the identity of Nakamoto, but that he's not Nakamoto himself. This claim is often accompanied by an old photograph of Elon and an unidentified person: This is a genuine photograph of Musk. It was included in the biography "Elon Musk: Tesla, SpaceX, and the Quest For a Fantastic Future" by Ashlee Vance and shows Musk in the early '90s at Queen's University in Ontario. The other person in this picture, however, is likely Navaid Farooq, one of Musk's college friends.

In a podcast appearance in 2021, Musk said that he didn't know who created bitcoin but guessed that it was Nick Szabo, a computer scientist and cryptographer. Musk said:

“Obviously I don’t know who created bitcoin for practical purposes, but the evolution of ideas is pretty clear before that. It seems as though Nick Szabo is probably, more than anybody else, responsible for the evolution of those ideas ... He claims not to be Nakamoto but that’s neither here nor there. He seems to be the one more responsible for the ideas behind bitcoin than anyone else."

Who Else Could Be Nakamoto?

A number of people have been rumored to be Nakamoto over the years. The most likely candidates are the cryptographers who were working on cryptocurrency projects circa 2008, such as Szabo and Hal Finney, but these people have denied the rumors. The Wall Street Journal provided an FAQ of sorts on its own investigation of the subject:

Do we know anything about Nakamoto as a person?

Not really. In public messages, and even in private messages that were later released, Nakamoto never spoke about anything personal ... Nakamoto used two email addresses and one website. The identity of the person who registered them is blocked.

Somebody must be Nakamoto, though, right?

Yes, and over the years virtually anybody who did work even remotely similar to bitcoin—such as Mr. Finney, who died in 2014, and Mr. Andresen—has been pegged as Nakamoto. All have denied it, and there hasn’t been evidence to prove otherwise.

In 2014, a group of students and researchers at Aston University in Birmingham, England, carried out a linguistics analysis and concluded that Mr. Szabo was most likely to be Nakamoto. Others have claimed he is Nakamoto as well. Mr. Szabo has denied the claim.

In 2014, Newsweek claimed it found the real Nakamoto. While "Nakamoto" was widely believed to be a pseudonym, Newsweek claimed that it was the bitcoin founder's real name, and that he was living in California. Dorian Prentice Satoshi Nakamoto has since denied these claims:

Here's a New York Times article about the controversial identity of Nakamoto, also from 2014. 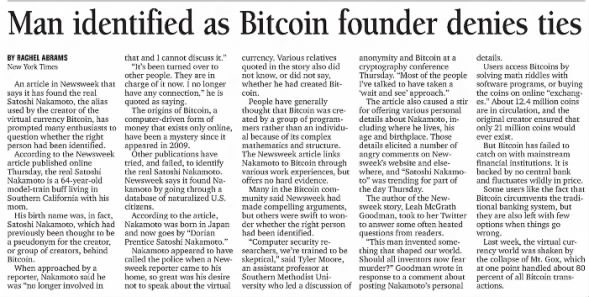 So Who Is Satoshi Nakamoto?

All we can say with certainty is that this name was used by the person or persons who developed Bitcoin. As for who that person(s') real identity, that's still a mystery.