Meet Michel Lotito, the Man Who Ate an Entire Airplane ... or So He Claimed

Gastroenterologists supposedly confirmed Lotito was able to consume 2 pounds of metal per day, though not without consequences. 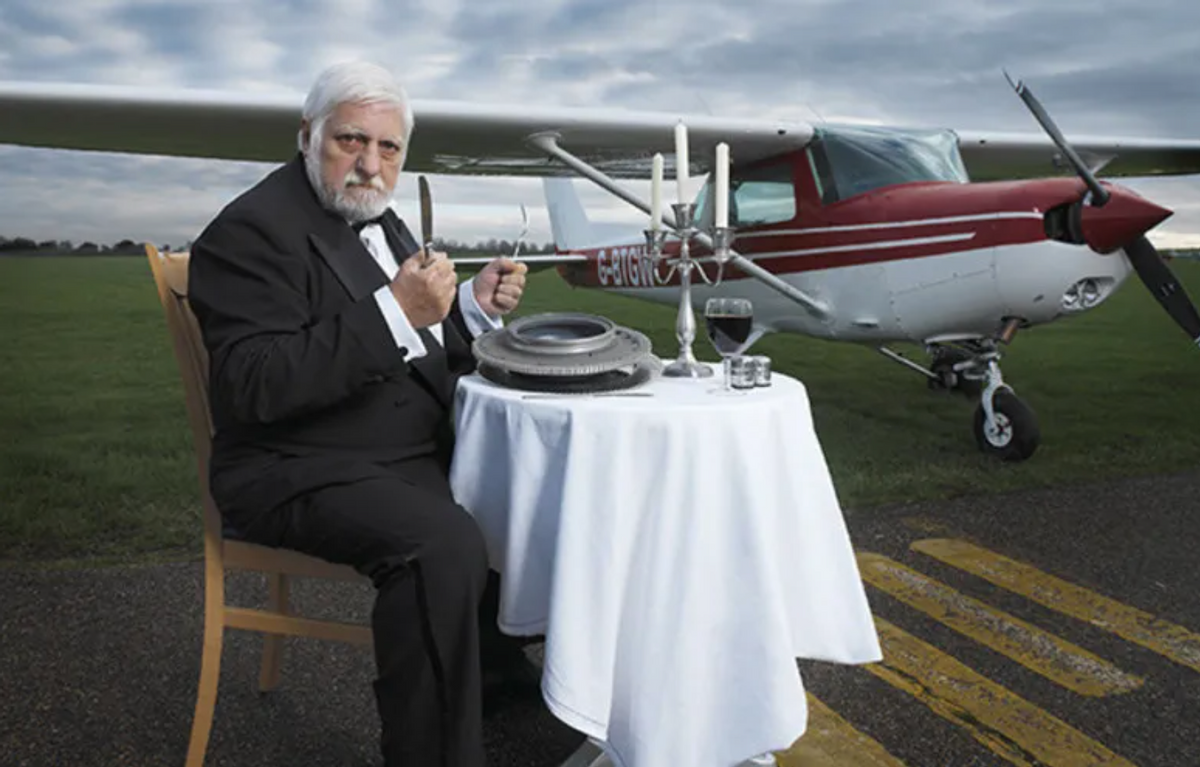 Though taste is subjective, most people might objectively agree that metal, glass, and rubber don’t make for fine dining.

But Michel Lotito was not most people.

At the age of 9, Lotito reportedly began eating glass and metal — a habit that would continue throughout the course of his lifetime. Guinness World Records, which designated the French man as having the "strangest diet" on record, wrote that Lotito became aware of his ability when “a glass from which he was drinking, broke and he began chewing the fragments.”

"Monsieur Mangetout," as he was popularly known (“Mr. Eat-All” in English), had a diet that was said to have included, over the course of his life, “8 bicycles, 15 supermarket trolleys, seven TV sets, six chandeliers, two beds, a pair of skis, a low-calorie Cessna light aircraft and a computer.” He is also credited with being the only known person to consume a coffin, handles and all. In an email to Snopes, a spokesperson confirmed that Lotito "currently holds the Guinness World Records title for the Strangest Diet" and that he had been "eating metal and glass since 1959." Gastroenterologists who X-rayed Lotito’s stomach said he was capable of consuming 2 pounds per day, according to his Guinness World Records entry. However, the spokesperson was unable to provide a record of the supposed x-ray and we were not able to independently verify whether such a report existed.

He also ate other things that might not appeal as appetizing.

Perhaps the strangest object that Lotito said he consumed was a Cessna 150 airplane that he claimed to have started eating in 1978, swallowing the aircraft bite-by-bite until 1980, according to Ripley’s Believe It Or Not.

We looked through newspaper archives and found other reported instances of Lotito’s strange diet, including a 1978 article published in the Canadian newspaper The Leader-Post alleging that over the course of 12 days Monsieur Mangetout ate 15 pounds of bicycle cut into pieces “one or two cubic centimeters big" (though he did not eat “inedible” parts like the pedal, the crank-gear, or the handle-bar).

“As side dishes, Monsieur Mangetout (Mr. Eat-it-All) also ate 100 razor blades, two plates and a glass, washing it down with about 10 bottles of mineral oil and 25 gallons of water,” wrote the newspaper.

In 1980, The Madison Courier reported that the unusual habit began as a form of entertainment, but eventually turned into a lucrative business. Lotito would sometimes be paid $1,000 a day for such performances, which also included having audience members “throw darts into his back, light matches under his fingernails and pinch the skin of his arms with pliers.”

But as the publication also reported, Lotito’s feats were not without consequences, including indigestion. The body can’t digest metal like it would bananas or hard-boiled eggs (both foods that Lotito claimed made him feel ill). There’s also a lot that can go wrong when consuming indigestible goods, including heavy metal poisoning and the possibility of tearing open parts of the body from its entrance to its exit, including the esophagus and gastrointestinal tract.

“The problem is that the metal often contains sharp edges or pieces of shard, and they can catch on the lining of the intestinal tract. When they do, they scratch and irritate, sometimes they cut deep and cause internal bleeding,” the paper reported.

“And so Lotito must be very careful. He lubricates his system with mineral oil, for one thing. He also stretches the meal over several days. He chops all the metal into pellets, and washes them down with copious amounts of drinking water.”

He was also said to cautiously limit his consumption of bicycles to just three a year.

The reported details of Lotito's diet were indeed strange, but we were not able to independently confirm that the French man ate all the objects he claimed to have consumed. Snopes spoke with Ben Sherwood, a journalist and author of The Man Who Ate the 747: A Novel. In an email to Snopes, Sherwood confirmed that he interviewed Lotito by telephone in 1999 when he was researching his book.

"Yes, 'Monsieur Mangetout' says he consumed a Cessna light aircraft and explained his technique in considerable detail. As I recall from memory, he said the rubber tires were the least appetizing part of the airplane. Lotito also claimed that he had eaten a lot of other objects including bicycles, TVs, skis, etc.," Sherwood told Snopes.

"I enjoyed speaking with him — the interview was conducted in French with his wife shouting answers in the background — and his colorful descriptions were helpful to my research."

However, Sherwood said was not able to verify any of Lotito's claims.

While Snopes can definitively say that there are numerous accounts of Lotito's consumption of seemingly inedible objects, and that he very likely ate some strange things on stage as a professional entertainer, we were unable to confirm that ate an entire airplane, or even part of one. If and when we receive documentation that enables us to do so, we will update this article accordingly.

Lotito died of natural causes in 2007, but before his death was given a brass plaque by the Guinness Book of World Records, which the flight school Academy of Aviation noted he also ate. Bon appetite.

Did Somebody Really Eat An Airplane? https://www.academyofaviation.com/please-do-not-eat-our-airplanes.html. Accessed 4 Mar. 2022.