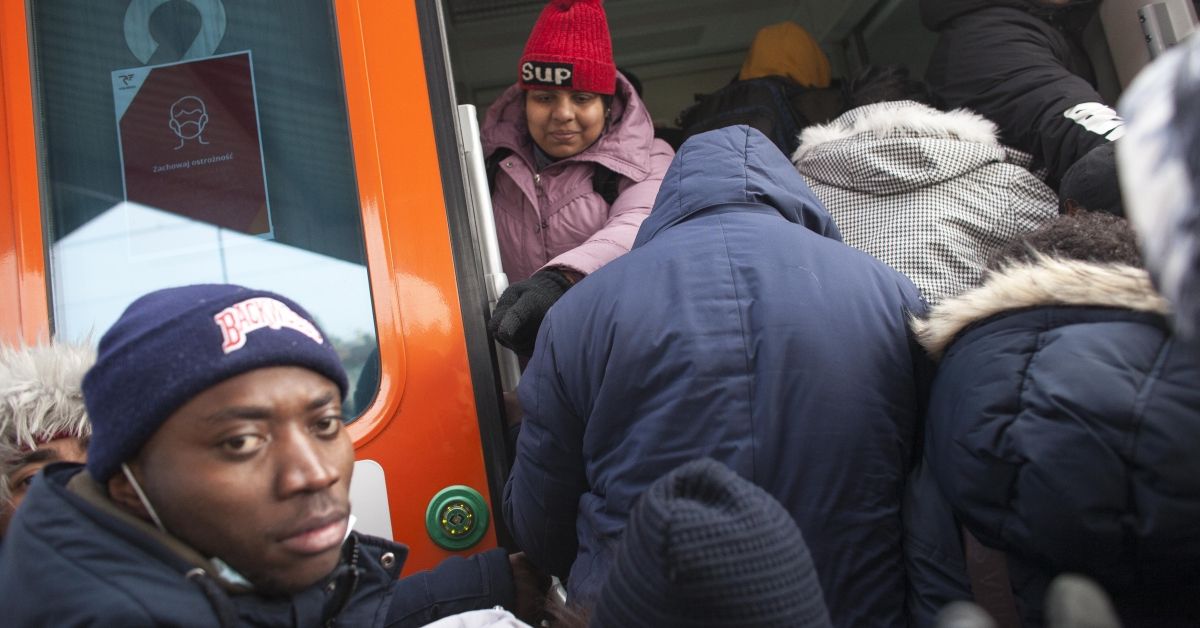 As Russia invaded Ukraine in late February 2022, hundreds of thousands of people in Ukraine attempted to flee. Refugees poured into neighboring countries with almost half a million people entering Poland after the country opened its borders to everyone, regardless of nationality.

While accounts differ, the sheer number of public reports from non-Ukrainian refugees leaving Ukraine indicate that there were numerous instances of discrimination at border crossings, particularly on the Ukrainian side.

Africans who were residing in Ukraine at the time the war broke out reported discrimination and racism at the Ukrainian border as they fled the country alongside Ukrainian nationals. We spoke to two of them who are currently in Warsaw, Poland.

Alexander Somto Orah, a Nigerian student majoring in management, was attempting to leave Kyiv by train for the Polish border. At the station, along with thousands of others, he said that he saw the Ukrainian authorities were not allowing any Africans on board. When he and his friends questioned them, they said they were only taking women and children.

“I said to them [...] why weren’t they taking any African women and children? And then we started to make noise,” Orah told us.

He even noticed that they were not checking passports to determine nationality. “If they are going to say, [the train] is only for Ukrainians, why aren’t they looking at passports? Lots of Africans here speak Ukrainian,” he said. Orah also said that the only Black man allowed to board had a Ukrainian wife and children.

Eventually, he managed to get on a train after begging and noticed he was one of only three Africans on a train that was not full.

“The train was already leaving, we jumped in and it had already started moving. [I was] holding the door and told them, ‘You either open the door or we die on the road,’” Orah said to a Ukrainian official. “He finally opened the door.”

When he arrived in Lviv, he tried to get on another train going directly to Poland, but the last train took only Ukrainians, who were largely women and children, with only three African women allowed through. He described how the foreign students began making a fuss, and calling for more African women to be allowed on the next train until the authorities eventually relented.

He finally ended up taking a taxi to the border and found a driver who charged $100 per person. They only made it halfway to the border, stuck behind thousands of cars that had stalled in the traffic. Orah and his companions then trekked for more than half a day, arriving at the border early in the morning.

“I was exhausted,” he said. “There was a barricade at the border. They separated us and told Africans and [other] foreigners to go to the other side, and Ukrainians to the other side. They were not checking passports at this time.”

He spoke to other people in his line, who had been waiting for three days. “They [allowed] a hundred Ukrainians [to cross], and two foreigners at a time,” he told us.

Finally, they began pushing forward, trying to get past the barricade. “[The Ukrainian military] threatened to beat us and we didn't care. We all yelled, ‘One, two, three, go!’ And we ran through. They were beating people who were vulnerable, and we pushed them to the ground.”

When they got past the barricade, he recalled they spent another 30 minutes getting to the border, which was closed. A law enforcement officer told the Africans, Arabs, and Indians, to turn back and go to the Romanian border. The Indian embassy was reportedly providing buses for Indian nationals there.

At that point, Orah’s friend shouted at the official, “You are racist and you are trying to hide it.” They all began shouting, saying the border officials were committing a war crime, and brought out their cameras, and the official went inside the checkpoint. Finally, they began permitting women and children from among the foreigners to cross first.

Orah finally was permitted to cross. He emphasized, “While we were walking to the border Ukrainians were offering us food. The only people we had issues with were law enforcement officers.” When they crossed into Poland, they were given food as well and he is now in a hotel in Warsaw, uncertain about his plans.

He shared videos of scenes at the border, and detailed his experience on Twitter.

Jean Yves, a Cameroonian who arrived in Ukraine almost a decade ago as an engineering student and has been living and working there since, told Snopes he had a similar experience at the Polish border. He took his own car, traveling for two days to get there, and spent four to five days trying to cross, an experience he described as harrowing: “I cannot walk properly,” he told us. “I injured my legs.”

Like Orah, he was held up by the traffic. He walked around 15 kilometers to the border, dragging his baggage with him, and encountered the first barricade where there were thousands of people waiting. By evening, he said the temperature was minus 3 degrees, and that waiting period was “the worst moment of my life.”

Other foreigners there had been waiting for at least three days. When he asked them if they could just go back and try another route, they said there was no way they could go back to Lviv: “The only way to go is to die here, or hope they will take us.”

Similar to Orah, he was also in a line for foreigners, which he said was organized according to skin color, because officials were not checking passports. “Why was the Ukrainian line going so fast?” he remembers wondering, “[And] the foreigner line was spending days waiting to cross the border.”

He emphasized that scenes at the crossing were highly tense, and did not want to totally blame all the military standing there. “Black people were also not behaving in the perfect way [...] because it was very uncomfortable. They started to push. As soon as they had an opportunity to cross they started to try to cross.”

“But how do you want people to behave if they were standing for two days, very hungry, at the border?” he asked. “The law enforcement was not paying attention to how hard it was. It was too crowded, and maybe there were not a lot of forces to support them.”

Yves, who spoke both Russian and Ukrainian, said he tried to question a border official, but the official didn’t want to talk to him: “If you challenged him, he would send you back to the end of the line.” Others threatened to shoot people in the line or beat them with sticks.

“I am trying to be totally fair, not all of them are racist, but the military forces [managed] the foreigners at the border in the totally wrong way,” he continued. “They wanted to evacuate Ukrainians [...] why were they not taking Black women or children? Why did those Black women have to stand at the border for days?”

He added that Ukrainian people were supportive of them, and offered them snacks on the way to the border, while the military was threatening them.

By the second barrier, he said they were treated better, with Black men spending at most two days before being allowed to move forward, and Black women being allowed through. At the last barrier, he said, the officials were very professional. He eventually met up with his wife in Poland, who is also of Cameroonian origin, and who crossed the border from Slovakia. She had a better experience crossing, he said.

More stories like theirs spread across the internet. A CNN producer shared the experience of his adoptive sister who was originally from Sierra Leone.

The BBC followed the journey of a Nigerian student named Jessica who said she had to walk for hours because Ukrainian officials said the buses going to the border were for “Ukrainians only.” She said, “They will push you, they will beat you. If you can make it, you make it. If you don’t, you don’t.”

Other reports from numerous news outlets shared similar stories, highlighting the stories of Indian and other foreign students who faced similar issues:

Adnan, an Afghan-origin man and Heda, a Moroccan woman, however, described chaos that they said was not a result of skin color.

“Many people jumped the queue. It happens especially when you don’t speak the language. But I don’t think it has anything to do with race or skin colour. All foreigners are treated this way. They prioritise Ukrainians,” Adnan told Al Jazeera.

The African Union released a statement in response to all the reports, condemning the reported discrimination: “Reports that Africans are singled out for unacceptable dissimilar treatment would be shockingly racist and in breach of international law. In this regard, The Chairpersons urge all countries to respect international law and show the same empathy and support to all people fleeing war notwithstanding their racial identity.”