What Is Ukraine's Azov Battalion?

The far-right group has been fighting in Ukraine's eastern region since 2014. 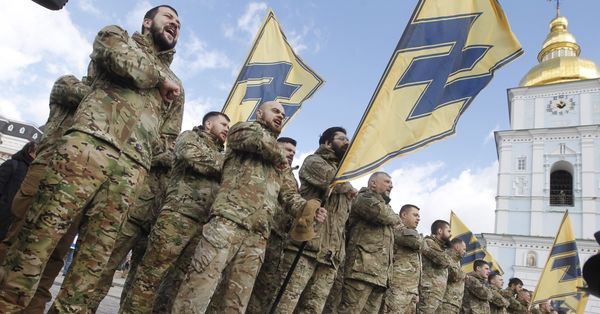 Russia's invasion of Ukraine and the ensuing military violence and instability have mobilized far-right extremists, playing into Russian President Vladimir Putin's propaganda about "neo-Nazis" running the country as justification for invading Ukraine.

In a speech given just before Russia launched its ongoing attack on Ukraine, Putin justified what he described as a "special military operation." He stated:

Its goal is to protect people who have been abused by the genocide of the Kyiv regime for eight years. And to this end, we will strive for the demilitarisation and denazification of Ukraine, as well as bringing to justice those who committed numerous bloody crimes against civilians, including citizens of the Russian Federation.

Putin's comments were misleading on more than one front. Besides falsely equating Ukraine's national government with "Nazis," Russia's "special military operation" has turned out to be an all-out assault on Ukraine, including its civilians.

As the Ukrainian military and ordinary citizens fought for their lives and the sovereignty of their homeland against the invading Russian force, various social media users shared posts about a group called the Azov Battalion.

The Azov Battalion is a real extremist group that became (and still is) a faction in Ukraine's national guard, but to equate them with the "Kyiv regime" is to vastly overstate their size and influence.

To say that the Azov group is representative of Ukraine's overall defense or government is false, because it makes up a small percentage of Ukraine's total military defense, and Ukraine's national government system is a democracy.

Like many European countries, Ukraine has political parties that range the spectrum from socialist to far right. Ukraine's president, Volodymyr Zelenskyy, is Jewish and associated with centrist politics.

For comparison, Azov membership was estimated to be anywhere from 900 to 2,500 prior to the Russian invasion, while the Ukrainian standing military in total was composed of about 200,000 troops. It's important to note here that these numbers are outdated, given that as of this writing, every facet of Ukraine's defenses have recruited new volunteers in the ongoing effort to fend off the invasion.

But in 2020, journalist  Oleksiy Kuzmenko, writing for the Atlantic Council, presciently noted the potential problems the group posed for Ukraine domestically and on the international stage:

The Azov movement has long been a symbol of the far-right in Ukraine. It has risen to prominence over the past six years due to its role in the ongoing war against Russia, and has achieved levels of mainstream media exposure far in excess of the group’s minimal electoral support. This is not only a domestic issue for Ukraine. The far-right in general, and their apparent impunity, have significantly damaged Ukraine’s international reputation and left the country vulnerable to hostile narratives exaggerating the role of extremist groups in Ukraine. With awareness of right-wing terrorism now growing globally, the potential threat posed by the Ukrainian far-right beyond the borders of the country is attracting increasing attention.

The Ukrainian National Guard's decision to tweet a brief video showing an Azov fighter coating bullets intended for Chechen Russian soldiers, who are Muslim, in pig fat, helped thrust the group into the global eye as the broader war unfolded.

The tweet, which contains text referring to Chechen soldiers as "orcs," was slapped with a label noting that it violated Twitter's rules on hateful conduct. British stand-up comedian Tez Ilyas, who is Muslim, further noted that the idea of greasing bullets with pig fat to terrorize Muslims is a racist hoax.

"Far right racists made that up and the official Ukrainian National Guard is endorsing it," he tweeted. "These are the forces my Foreign Secretary wants British civilians to go fight with?"

What is the Azov Battalion?

The Azov Battalion, sometimes referred to as the Azov regiment or Azov movement, grew out of the conflict with Russian-sponsored separatists in the eastern Ukraine region of Donbas that began in 2014. As Radio Free Europe reports, it was initially composed of volunteers known in Eastern Europe as "ultras," or "hard-core, far-right soccer fans, including many violent hooligans."

But they were effective against their pro-Russian enemies, earning Azov praise from Ukrainian officials, including former Ukrainian president Petro Poroshenko. In November 2014 they became part of the National Guard of Ukraine.

This has hardly been without controversy, because the group is widely viewed as consisting of violent extremists and white supremacists.

"The unit has denied it adheres to Nazi ideology as a whole, but Nazi symbols such as the swastika and SS regalia are rife on the uniforms and bodies of Azov members," Al Jazeera reported in a March 2022 profile of the group. Its insignia strongly resembles a Wolfsangel, an ancient rune appropriated by Nazi Germany.

Former U.S. Rep. Max Rose, D-N.Y., tried unsuccessfully to get the group classified by the U.S. State Department as a foreign terror organization. The group has been accused of human rights abuses, while the violence in the region has been a magnet for foreign extremists to join Azov and learn combat skills.

Ashok Swain, professor of peace and conflict research at Sweden's Uppsala University, tweeted a warning that if war continues in Ukraine, the region could become a destination and multiplier for extremism in the way war zones in the Middle East did:

“The Azov Regiment Has Not Depoliticized.” Atlantic Council, 19 Mar. 2020, https://www.atlanticcouncil.org/blogs/ukrainealert/the-azov-regiment-has-not-depoliticized/.