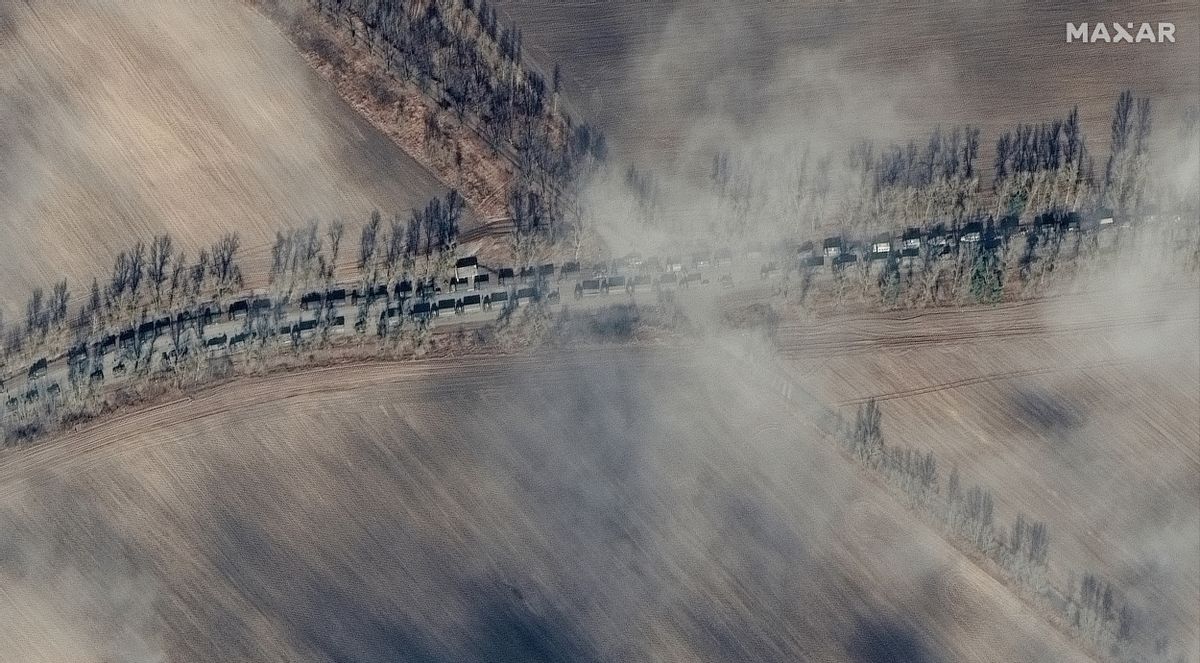 Russian military forces continued to press toward Ukraine’s capital city bringing with them a massive convoy containing fuel, logistical operations, and armored vehicles — all of which were captured by satellite imagery.

Captured and processed by Maxar Technologies, a space tech company headquartered in Colorado, the photographs quickly went viral, and as of March 1, 2022, had been covered by publications including CNBC, Reuters, The Washington Post, and Axios. With offices around the world, Maxar partners with businesses and governments to “detect and predict change across the globe” using high-resolution imaging satellites.

On Feb. 27, 2022, the company detected a large deployment of Russian ground forces it said contained hundreds of military vehicles moving in the direction of Kyiv, the largest city and capital of Ukraine. Though the convoy photographed in the satellite images was said to extend 3.25 miles in length, it has been reported that the Russian convoy stretched an estimated 40 miles long as it struck Ukraine’s second-largest city, Kharkiv.

Spanning through the winter-stricken nation of Eastern Europe, the photographs showed the convoy inching toward the coveted city of Kyiv. As of this writing, the convoy is estimated to stretch from near Antonov airport in the south, where the world’s largest plane was destroyed, to the northern end of the convoy near Prybirsk (according to reporting by NPR).

The following photographs were captured in the four days after the initial invasion of Ukraine on Feb. 24. Captured on Feb. 27, this photograph shows a large deployment of Russian ground forces that, according to Maxar Technologies, contained hundreds of military vehicles, northeast of Ivankiv in the direction of Kyiv, approximately 40 miles away. (Maxar/GettyImages) The convoy extended more than 3.25 miles and contained fuel, logistical operations, and armored vehicles including tanks, infantry fighting vehicles, and self-propelled artillery. It was photographed traveling on Feb. 27 along the P-02-02 road, also known as Shevchenka Road, an international highway that connects Ukraine to the Russian border. (Maxar/GettyImages) Captured on Feb. 28, the above photograph shows the end of the large military convoy as it approached the edge of Antonov Airportan, an international cargo airport and testing facility located near the town of Hostomel. (Satellite image (c) 2022 Maxar Technologies) Russian airborne forces were photographed in Zdvyzhivka, Ukraine on Feb. 28. Located about 46 mile northwest of Kyiv, the town of Zdvyzhivka is south of the Belarusian border. (Satellite image (c) 2022 Maxar Technologies)

Satellite imagery of the northern end of the convoy positioned southeast of Ivankiv with logistics and resupply vehicles on Feb. 28. (Satellite image (c) 2022 Maxar Technologies) A closeup view of helicopters with one in air at Bolshoy Bokov Airfield in Belarus was photographed on Feb. 25. (Satellite image (c) 2022 Maxar Technologies)