Other Sanctions on Putin: No More Black Belt, World Cup, Or Eurovision

International governments aren't the only ones attempting to punish Russia for its unprovoked invasion of Ukraine. 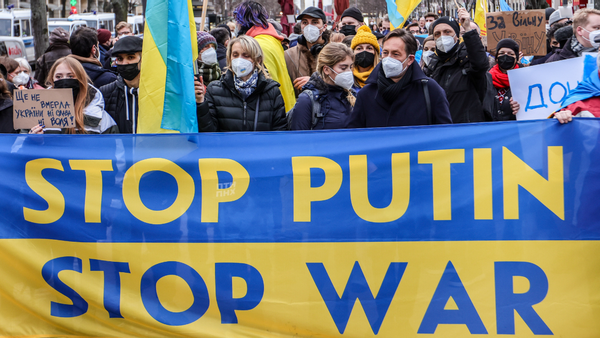 In February 2022, after Russia launched an unprovoked full-scale invasion of Ukraine, the United States, the European Union, and other NATO members announced a series of sanctions that prohibited Russia's banking access, restricted flights, and froze many of the country's assets. While these sanctions could have a crippling impact on Russia's economy, they aren't the only punishments facing the country. A number of private organizations have also announced their own forms of "sanctions" against Russia. In 2013, Putin was given an honorary black belt by World Taekwondo. In February 2022, the organization released a statement condemning the "brutal attacks on innocent lives" in Ukraine and withdrew the honor from Putin:

The Eurovision Song Contest has been bringing together songwriters, singers, and musicians from across Europe for almost 70 years. Russia, which first entered the contest in 1994, has been banned from competing during this year's competition. The European Broadcast Union said in a statement:

The EBU has announced that no Russian act will participate in this year’s Eurovision Song Contest.

The decision reflects concern that, in light of the unprecedented crisis in Ukraine, the inclusion of a Russian entry in this year’s Contest would bring the competition into disrepute.

The Associated Press has more about Russia's Eurovision ban.

While there hasn't been a definitive ban on Russian vodka sales, a number of liquor stores (and a few state governments) have prohibited the sale of Russian-made vodka. Total Wine & More, a large liquor store in Michigan, for example, put out a statement saying it was removing Russian-made products:

"Today, this is what you will see in our stores. In support of the Ukrainian people, we have removed all Russian-made products from our shelves."

No, not really. That one was fake news.

FIFA and the UEFA announced that Russian clubs and national teams would be banned from all upcoming events.

FIFA and UEFA have today decided together that all Russian teams, whether national representative teams or club teams, shall be suspended from participation in both FIFA and UEFA competitions until further notice ... Football is fully united here and in full solidarity with all the people affected in Ukraine. Both Presidents hope that the situation in Ukraine will improve significantly and rapidly so that football can again be a vector for unity and peace amongst people.

In addition to losing football, Russia has also been banned by the International Ice Hockey Federation from all upcoming competitions. Russia was also scheduled to host the Junior World competition in 2023, but this privilege has also been revoked.

Russia was scheduled to host a Formula 1 Grand Prix race in September, but the Fédération Internationale de l'Automobile (FIA) cancelled the event, saying that it would be impossible in the current circumstances.

The FIA Formula 1 World Championship visits countries all over the world with a positive vision to unite people, bringing nations together.

We are watching the developments in Ukraine with sadness and shock and hope for a swift and peaceful resolution to the present situation.

On Thursday evening Formula 1, the FIA, and the teams discussed the position of our sport, and the conclusion is, including the view of all relevant stakeholders, that it is impossible to hold the Russian Grand Prix in the current circumstances.

There have also been calls for FIA to ban Russian drivers from events. As of this writing, that decision has not been made.

Banned From the Olympics?

Russia hasn't officially been banned from the Olympics yet, but the International Olympic Committee Executive Board did recommend a ban:

In order to protect the integrity of global sports competitions and for the safety of all the participants, the IOC EB recommends that International Sports Federations and sports event organisers not invite or allow the participation of Russian and Belarusian athletes and officials in international competitions.

This has led to some international sporting organizations to ban Russian competitors. The International Skating Union (ISU), for example, announced that they would stop, for the time being, inviting Russian or Belarussian athletes to competitions.

The International Chess Federation (FIDE) announced that "no official FIDE chess competitions and events will be held in Russia and Belarus." The FIDE also announced that it will not play the National Anthems of Russia or Belarus, and that these country flags will be prohibited from events:

“FIDE expresses its grave concern about the military action started by Russia in Ukraine. FIDE stands united against wars as well as condemns any use of military means to resolve political conflicts. FIDE will take any necessary action to ensure the security of chess players and other members of the chess community. No official FIDE chess competitions and events will be held in Russia and Belarus.”

Miss Supranational, an international beauty pageant, has also announced that it will not be accepting competitors from Russia:

Several movie studios have also announced that they will not be releasing their summer movies in Russia. According to The Associated Press, Warner Bros., the Walt Disney Company, and Sony Pictures have all announced a "pause" in their Russia release schedule. This will prevent highly anticipated movies such as "The Batman" from opening in the country.

A spokesperson for Warner said: "In light of the humanitarian crisis in Ukraine, WarnerMedia is pausing the release of its feature film ‘The Batman’ in Russia. We will continue to monitor the situation as it evolves. We hope for a swift and peaceful resolution to this tragedy.”

A spokesperson for Disney said: "Given the unprovoked invasion of Ukraine and the tragic humanitarian crisis, we are pausing the release of theatrical films in Russia, including the upcoming 'Turning Red' from Pixar ... We will make future business decisions based on the evolving situation."

No Franz Ferdinand, No Green Day

A number of bands have also announced concert cancellations in Russia. Franz Ferdinand, for example, said it was canceling upcoming shows:

NME reported that Yungblud, Green Day, and the Russian rapper Oxxxymiron have also cancelled shows in the country.

Bans have also been announced for Russian state-backed television networks, such as RT and Sputnik, in an attempt to stop the spread of propaganda. European Commission president Ursula von der Leyen said:

“Russia Today and Sputnik, as well as their subsidiaries, will no longer be able to spread their lies to justify Putin’s war and to sow division in our union. So we are developing tools to ban their toxic and harmful disinformation in Europe.”

On March 1, 2022, Apple announced that it had "paused all product sales" in Russia due to the country's unprovoked attack on Ukraine. Apple has also prohibited apps for Russian state news outlets RT and Sputnik from being downloaded on its app store. CNN reported:

The company said in a statement that it is "deeply concerned" about the Russian invasion and that in response, it has "paused all product sales" in the country. Apple also said it has moved to limit access to digital services, such as Apple Pay, inside Russia, and restricted the availability of Russian state media applications outside the country.

"Last week, we stopped all exports into our sales channel in the country. Apple Pay and other services have been limited. RT News and Sputnik News are no longer available for download from the App Store outside Russia," Apple said. "And we have disabled both traffic and live incidents in Apple Maps in Ukraine as a safety and precautionary measure for Ukrainian citizens."

In addition to being banned from competing in real-world soccer and hockey competitions, Russian sport fans are also being prohibited from playing as Russian teams in video games. EA Games announced that it was removing the Russian and Belarusian teams from its FIFA 22 and NHL 22 games.

CD Projekt Red, the company behind popular video games such as Cyberpunk 2077 and The Witcher 3, announced that it was halting sales in Russia.

Airbnb also announced its own “sanction” on Russia. In addition to suspending operations in Russia and Belarus, the company also said that it would prohibit Russians and Belarusians from renting properties in other countries.

Brian Chesky, the co-founder and chief executive of Airbnb, made the announcement on Twitter:

The Professional Disc Golf Association also announced “sanctions” on Russia. The PDGA said that it would be suspending “event sanctioning in Russia and Belarus.” The PDGA said in a statement:

“The PDGA fully condemns the actions taken by the Russian government regarding their invasion of Ukraine, and the Belarusian government for their support of the invasion. Fellowship and sportsmanship are cornerstones of disc golf and its global community, unifying across borders, languages, and cultures. To that end, the PDGA unequivocally stands with the people of Ukraine.”

Russian Cats Get Banned from Competition

Cats are also experiencing some backlash over Russia’s invasion of Ukraine. The Fédération Internationale Féline (FIFe), an international cat federation, announced that Russians cats will be banned for the next three months of competition.

The FIFe Executive Board is shocked and horrified that the army of the Russian Federation invaded the Republic of Ukraine and started a war. Many innocent people died, many more are wounded and hundreds of thousands of Ukrainians are forced to flee their homes to save their lives. We can all witness the destruction and chaos caused by this unprecedented act of aggression … The Board of FIFe feels it cannot just witness these atrocities and do nothing.

“Russia Today, Sputnik and Other Channels Disappear from YouTube.” The Independent, 1 Mar. 2022, https://www.independent.co.uk/tech/youtube-rt-russia-today-sputnik-ukraine-b2025512.html.

Sweney, Mark. “Airbnb Suspends All Operations in Russia and Belarus.” The Guardian, 4 Mar. 2022. The Guardian, https://www.theguardian.com/technology/2022/mar/04/airbnb-suspends-all-operations-in-russia-and-belarus.