A 34-second clip plucked from a "CNN Presidential Town Hall" was shared without context on Facebook, TikTok, and Twitter. 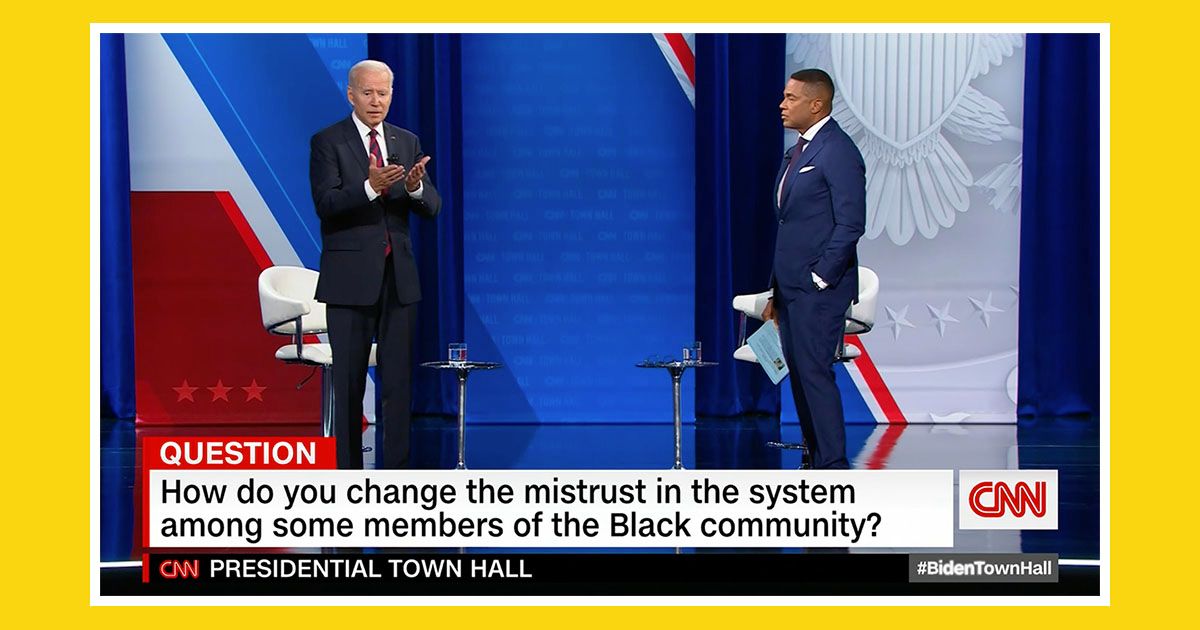 A video with US President Joe Biden and Don Lemon from a CNN Presidential Town Hall was taken out of context on social media.

Since July 2021, a viral video has made the rounds on Facebook, TikTok, and Twitter that appeared to show U.S. President Joe Biden asking CNN anchor Don Lemon, "You got the vaccination?" However, the 34-second clip was taken out of context from a longer answer that spanned well over two minutes. It came from a "CNN Presidential Town Hall" that occurred during the same year on July 21. The setting was Mount St. Joseph University in Cincinnati, Ohio.

The most-viewed post in which the out-of-context clip with Biden and Lemon was shared appeared to be on Facebook. The video was reposted in September 2021 by Clive Palmer, a billionaire businessman who is the founder of the right-wing United Australia Party. It was seen more than 2.4 million times and received nearly 50,000 likes and well over 44,000 shares. The clip was still being shared at least hundreds of times per day as of early March 2022. (Visit the link, scroll down to the post, and click the "shares" count to see recent shares.)

The Facebook video showed the watermark of a TikTok user named @thecuddycamaro, an account that is no longer available. This means that the clip had been downloaded from TikTok and then reuploaded to Facebook. The TikTok user ended the video with a reference to Biden's remarks, saying: "Who's running the country? Cause it's not this guy."

The transcript of the complete answer showed that Biden was briefly acting out a conversation between two people and was not asking Lemon at that specific moment if he, personally, had been vaccinated for COVID-19. Further, the Facebook and TikTok video placed a question mark next to the word "interlockiders" [sic]. Facebook users who shared the clip apparently thought Biden had made up the word. However, "interlocutors" is a real word that's defined as "one who takes part in dialogue or conversation."

Here is the full question-and-answer sequence between Lemon and Biden. It can also be watched in its entirety beginning at the 16:15 moment in a video from CNN.com. The out-of-context portion that appeared in the viral videos is bolded to show just how much context was omitted:

Don Lemon: Can I ask you something, Mr. President? Because, you know — and, by the way, you got — I don't know if you heard that you got applause when you corrected the "I" for "we." And we're talking about "we," and I think that's —

Don Lemon: — a commendable attribute to have. But even with my own family — I was just able to get with them. I haven't seen my mom in a year and a half, except for two weeks ago. I hadn't seen my family for two years since the last time they visited me two summers ago. But even within my own family — here I am on television every night — there is ambivalence, there's misinformation, and there's also mistrust in the system. How do you fix that?

Joe Biden: Well, I think — you're going to — this is going to seem like a non-answer to start with. One of the things I said when I ran for office — it's not Democrat or Republican again — is we got to restore faith in government. You got to get people to a point where they trust government.

And I made a commitment that when I made a mistake, I'd tell you I've made mistakes. And when I think I got it right, I'll say it. But I'll take responsibility for what I do and say.

And that goes to trust. Why can't you unite the country? Why isn't there a willingness to trust? Government trust is really at a — was at an incredibly low ebb. It's coming up some.

So with regard to your family in particular. Part of it is not just that they see you on television and trust you; the people who seem to have the most impact are the — are, you know, that — for that 17-year-old kid, the kid that he or she plays ball with. (Begin Viral Video) "You got the vaccination? Are you okay? I mean, you seem…" "No, it works." Or you, you know — or the mom and dad, or the neighbor, or when you go to church, or when you're — no, I really mean it.

There are trusted interlocutors. Think of the people — if your kid wanted to find out whether or not there were — there's a man on the moon, or whatever — you know, something, or, you know, whether those aliens are here or not — you know, who are the people they talk to beyond the kids who love talking about it? (End Viral Video) They go to people they respect, and they say, "What do you think?"

And so they should be asking other people — the people there — everything from their teachers to their ministers to the priest, to people that they trust.

The full program from CNN with Biden and Lemon can also be viewed on the TV News Archive on the Internet Archive.

In a YouTube video from the same person who posted the out-of-context video to TikTok, Cuddy Camaro can be heard singing a song in which he called Biden a "child-sniffing politician." The tune included lyrics that appeared to reference the debunked QAnon conspiracy theory claiming that prominent Democrats are known pedophiles. For example, the lyrics said that former U.S. President Donald Trump was "fighting pedophiles." The song ended with: "Save the women and children. Vote Trump 2020."

We reached out to TikTok to find out if the user was suspended from the platform for policy violations and will update this story if we receive a response.

For further reading, previously reported on two other viral moments from the July 2021 CNN town hall.