Widely shared social media posts were not sincere tributes but rather part of a distasteful trope from the darker corners of gamer culture. 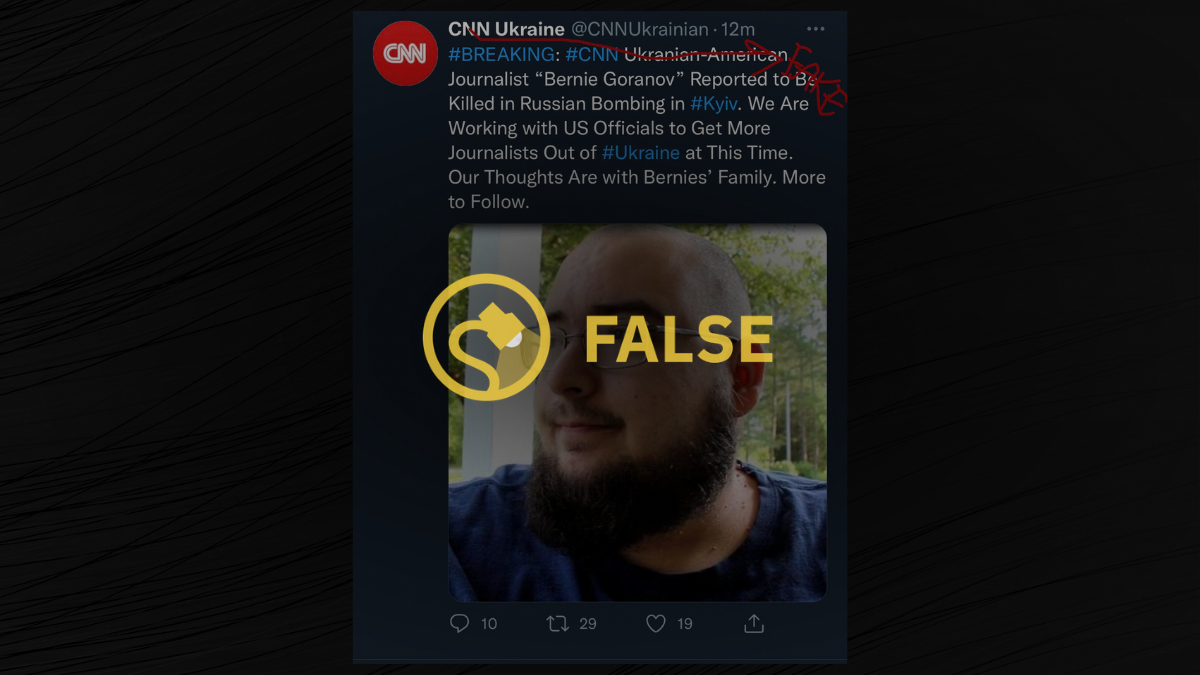 On Feb. 24, 2022, the first day (in local time) of Russia's invasion of Ukraine, social media users shared widely an insidious hoax that purported to provide details of the death of an "American journalist" or other U.S. citizens in a Russian bombing.

The viral hoax typically had the following components:

BREAKING: American journalist Farbod Esnaashari has been severely injured in bomb blast in Kyiv, Ukraine. The White House is currently preparing a statement... Esnaashari is a real reporter, but he covers basketball for Sports Illustrated, was not present in Ukraine during the invasion, and continued tweeting after the false and unsettling rumor of his demise had been posted. The photograph of him is authentic and appears to have been taken from his Twitter profile. Another figure from the world of basketball fandom, Arye Abraham, was featured in a second phony tribute to a supposedly deceased American journalist.

Multiple examples of the hoax could be found on Twitter in the first 24 hours of the invasion. Some of the most prominent examples appeared to be linked to online trolling and gamer tropes, similar to the "Sam Hyde" hoax often seen in the aftermath of mass shootings and terrorist attacks.

We’re sad to announce that the first American casualty of the Ukraine crisis has taken place. Thoughts and prayers with the family of activist Bernie Gores who passed away this morning after a mine planted by Russian backed separatists exploded. In reality, the man shown in that photograph was Jordie Jordan, a YouTuber and gamer also known as "Wings of Redemption," who has been the target of similar trolling in the past.

For example, in August 2021, similar phony "BBC Afghanistan" and "CNN Afghanistan" accounts posted fake descriptions of "Bernie Gores" as the victim of Taliban violence in the aftermath of the U.S. withdrawal from that nation. "Bernie Gores" is not a real person, but rather a fictional name which, when pronounced, requires the speaker to utter an exceptionally offensive racist phrase.

Another phony account, @CNNUkrainian, posted a similar tweet containing a photograph of Jordan, along with a modified version of the fictional name, "Bernie Goranov": These trolling social media hoaxes subsequently gave rise to less-detailed and more generic online rumors about the supposed death of an American journalist in Ukraine.

To be clear, it remains a possibility that U.S. citizens might ultimately be among those killed in the Russian invasion of Ukraine. However, as of Feb. 24, there were no specific, credible reports of American casualties, and the formulaic social media posts shared widely in the first hours of the invasion were distasteful hoaxes that emerged from the darker corners of gamer culture and basketball fandom.