This is a frightening moment. Russia has invaded Ukraine, and certainly those most frightened right now are the people of Ukraine. 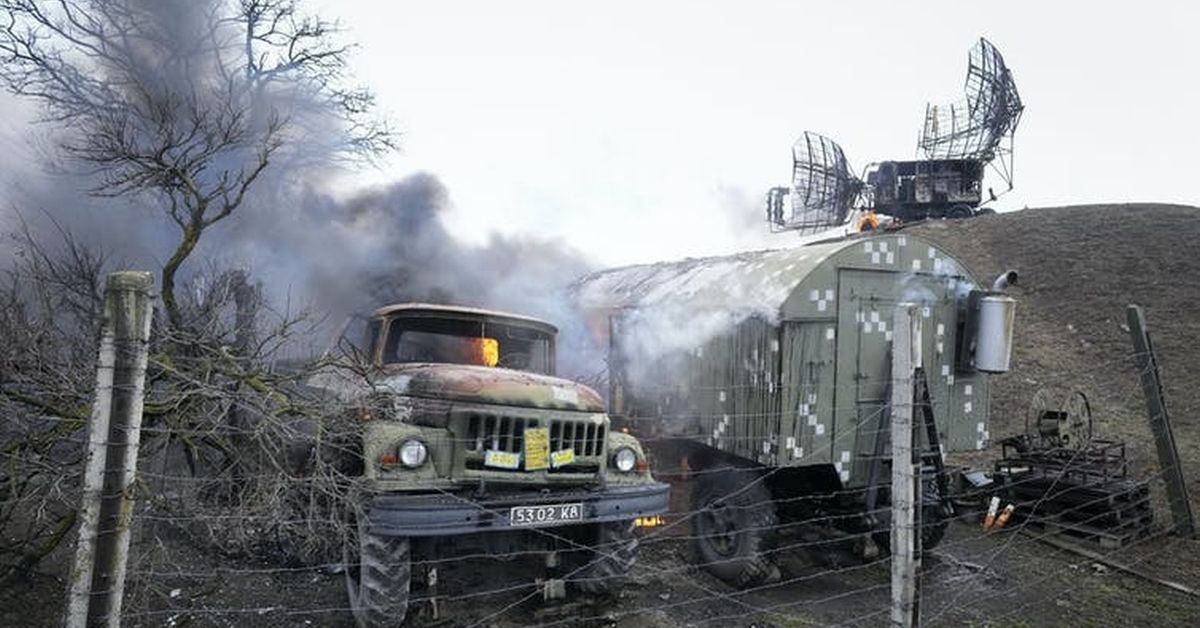 This article by Naomi Schalit is republished here with permission from The Conversation. This content is shared here because the topic may interest Snopes readers; it does not, however, represent the work of Snopes fact-checkers or editors.

This is a frightening moment. Russia has invaded Ukraine, and certainly those most frightened right now are the people of Ukraine. But violent aggression – a war mounted by a country with vast military resources against a smaller, weaker country – strikes fear in all of us. As a Washington Post headline writer recently wrote: The Ukraine crisis is “5,000 miles away but hitting home.”

The Conversation U.S. has spent the past couple of months digging into the history and politics of Ukraine and Russia. We’ve looked at their cultures, their religions, their military and technological capacities. We’ve provided you with stories about NATO, about cyberwarfare, the Cold War and the efficacy of sanctions.

Below, you’ll find a selection of stories from our coverage. We hope they will help you understand that today may feel both inevitable – yet inexplicable.

1. The US promised to protect Ukraine

In 1994, Ukraine got a signed commitment from Russia, the U.S. and the U.K. in which the three countries promised to protect the newly independent state’s sovereignty.

“Ukraine as an independent state was born from the 1991 collapse of the Soviet Union,” write scholars Lee Feinstein of Indiana University and Mariana Budjeryn of Harvard. “Its independence came with a complicated Cold War inheritance: the world’s third-largest stockpile of nuclear weapons. Ukraine was one of the three non-Russian former Soviet states, including Belarus and Kazakhstan, that emerged from the Soviet collapse with nuclear weapons on its territory.” 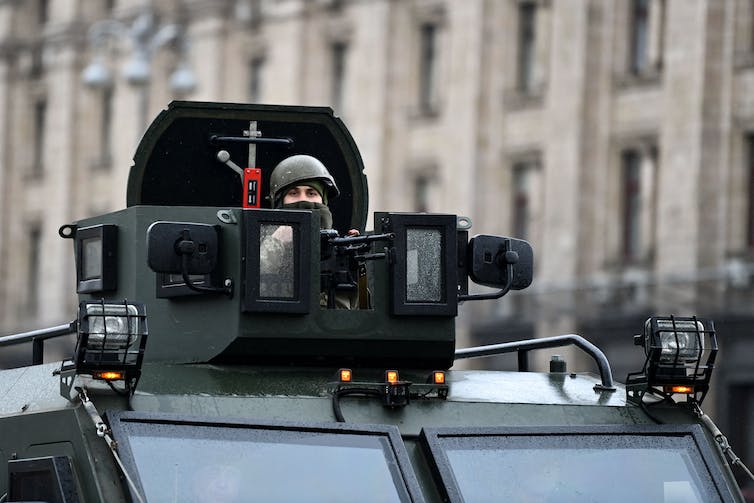 A Ukrainian serviceman rides atop a military vehicle past Independence Square in central Kyiv on Feb. 24, 2022.
Daniel Leal/AFP via Getty Images)

The 1994 agreement was signed in return for Ukraine giving up the nuclear weapons within its borders, sending them to Russia for dismantling. But the agreement, not legally binding, was broken by Russia’s illegal annexation of Ukraine’s Crimean Peninsula in 2014. And today’s invasion is yet another example of the weakness of that agreement.

2. Clues to how Russia will wage war

During the opening ceremony of the 2008 Beijing Olympics, Russia invaded Georgia, a country on the Black Sea. In 2014, Putin ordered troops to seize Crimea, a peninsula that juts into the Black Sea and housed a Russian naval base.

“From what I have learned, I expect a possible Russian invasion would start with cyberattacks and electronic warfare to sever communications between Ukraine’s capital and the troops. Shortly thereafter, tanks and mechanized infantry formations supported by the Russian air force would cross at multiple points along the nearly 1,200-mile border, assisted by Russian special forces. Russia would seek to bypass large urban areas.”

If you love spy movies, you’ve got an image of how intelligence is gathered: agents on the ground and satellites in the sky.

But you’re way out of date. These days, writes Craig Nazareth, a scholar of intelligence and information operations at the University of Arizona, “massive amounts of valuable information are publicly available, and not all of it is collected by governments. Satellites and drones are much cheaper than they were even a decade ago, allowing private companies to operate them, and nearly everyone has a smartphone with advanced photo and video capabilities.”

This means people around the world may see this invasion unfold in real time. “Commercial imaging companies are posting up-to-the-minute, geographically precise images of Russia’s military forces. Several news agencies are regularly monitoring and reporting on the situation. TikTok users are posting video of Russian military equipment on rail cars allegedly on their way to augment forces already in position around Ukraine. And internet sleuths are tracking this flow of information.” 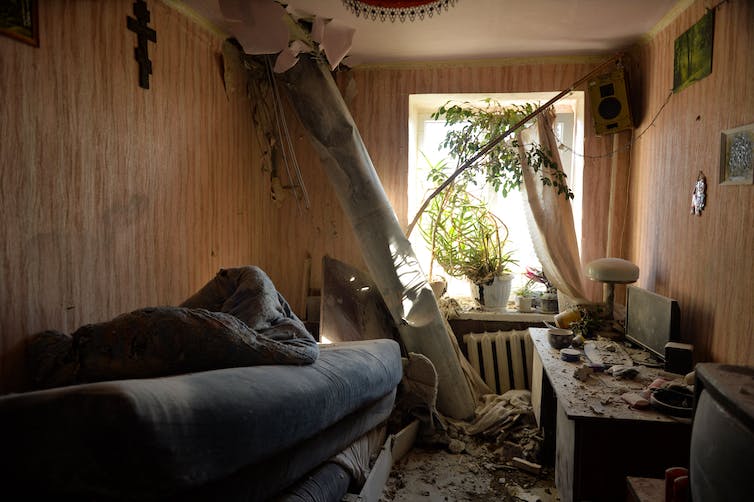 The body of a rocket stuck in a flat after recent shelling on the northern outskirts of Kharkiv, Ukraine on Feb. 24, 2022.
Sergey Bobok/AFP via Getty Images

4. Targeting the US with cyberattacks

As Russia edged closer to war with Ukraine, cybersecurity scholar Justin Pelletier at Rochester Institute of Technology wrote of the growing likelihood of destructive Russian cyberattacks against the U.S.

Pelletier quoted a Department of Homeland Security bulletin from late January that said, “We assess that Russia would consider initiating a cyberattack against the Homeland if it perceived a U.S. or NATO response to a possible Russian invasion of Ukraine threatened its long-term national security.”

And that’s not all. “Americans can probably expect to see Russian-sponsored cyber-activities working in tandem with propaganda campaigns,” writes Pelletier. The aim of such campaigns: to use “social and other online media like a military-grade fog machine that confuses the U.S. population and encourages mistrust in the strength and validity of the U.S. government.”

“War ultimately requires an enormous amount of public goodwill and support for a political leader,” writes Arik Burakovsky, a scholar of Russia and public opinion at Tufts University’s Fletcher School.

Putin’s support among Russians has been rising as the country massed troops along the Ukrainian border - the public believes that its leaders are defending Russia by standing up to the West. But Burakovsky writes that “the rally ‘round the flag effect of supporting political leadership during an international crisis will likely be short-lived.”

Most Russians, it turns out, don’t want war. The return of body bags from the front could well prove damaging to Putin domestically.

Want to learn more? Here’s an even bigger collection of our coverage of the crisis in Ukraine.