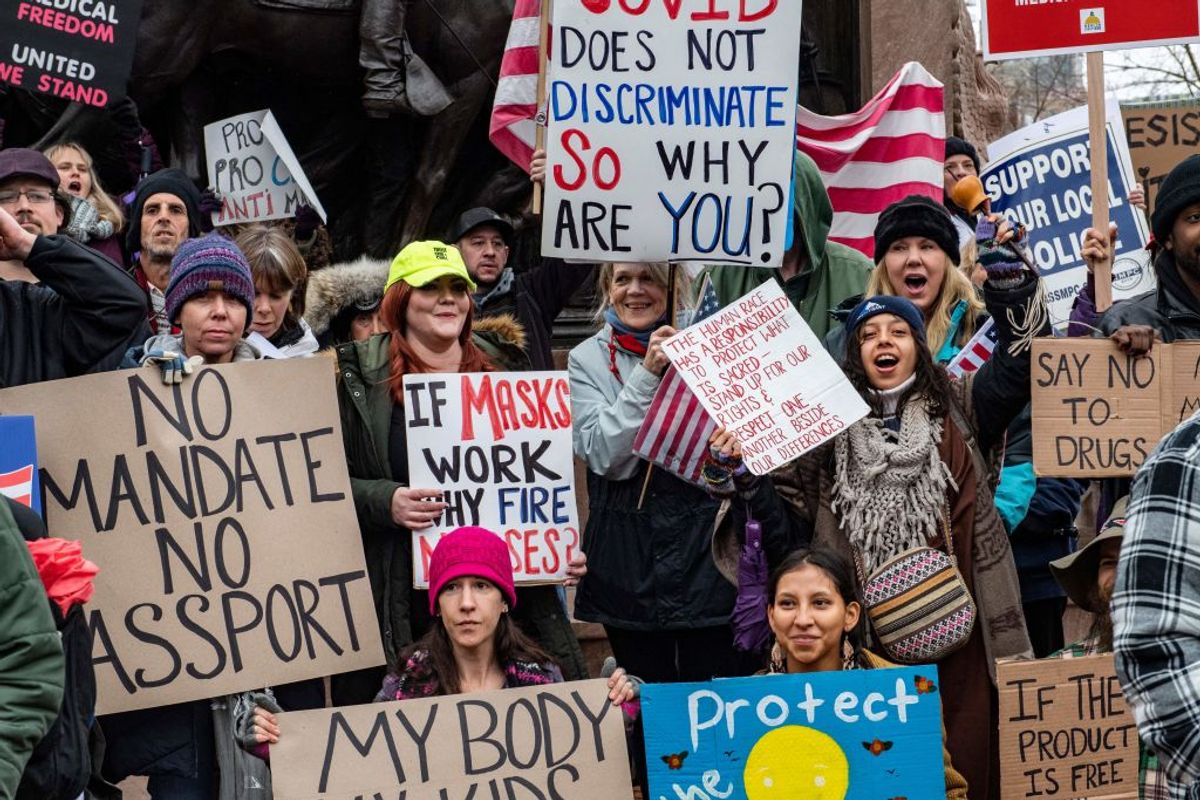 Few public health or legal experts would describe the United States' approach to curbing the COVID-19 pandemic via public policy as "centralized" or "comprehensive."

Rather, state lawmakers — not the federal government — have largely responded to the crisis however they have wanted, resulting in a patchwork of coronavirus-related laws across the country.

At the heart of this ad-hoc approach to policy making was this question: Were laws related to the spread of COVID-19, such as mandatory masking or vaccination policies, at all tied to an area's rate of infection?

Conclusive answers likely remain years away. Scholars have so far only completed one-off studies, like this evaluation of mask requirements in Melbourne, Australia, or measured mandates' effectiveness during an isolated period of the pandemic.

Below, we added to that ongoing research with a state-by-state analysis of laws during the omicron surge in late January 2022 by synthesizing data compiled by the nonpartisan National Academy for State Health Policy and AARP.

Light red — States with laws that require most people to wear masks indoors and eligible health care workers and/or state employees to be vaccinated, as of late January 2022.

Dark red — States with laws that require vaccinations only among health care workers, state employees, or both of those groups, as of late January 2022. Furthermore, we reviewed the Centers for Disease Control and Prevention (CDC)’s database of COVID-19 infection rates between Jan. 24 and Jan. 31. Specifically, we looked at 25 states with the highest seven-day case rate for every 100,000 people. And of that high-rate group, we concluded:

At the time of this analysis, the CDC was urging all unvaccinated individuals, as well as vaccinated people who live in areas of substantial or high transmission, to wear masks inside public spaces.

Meanwhile, nine states and D.C. (colored blue in the map) incorporated that public health recommendation into their law books, according to the AARP. As of late January, they required most people in public to wear facial coverings indoors, regardless of a building's function or their vaccination status. Additionally, Connecticut had a mandatory indoor mask policy that only applied to unvaccinated people, and Rhode Island issued a "hybrid order" that required people in large venues to cover their noses and mouths but gave smaller businesses more flexibility, the AARP reported.

Other states had less sweeping mask requirements that applied to specific sectors, such as health care, K-12 education, or transportation, and a number of local jurisdictions (cities/counties) nationwide had implemented their own mask mandates.

Alternatively, governors in a handful of states (such as Arizona, Florida, and Iowa) had passed laws barring local governments from enforcing various types of mask requirements.

Where Health Care Workers, State Employees Must Be Vaxxed

Federal vaccine mandates aside, some state governments had passed laws to require vaccinations among health care workers and/or state employees.

According to data from the nonpartisan National Academy for State Health Policy, eligible workers in health care settings across Kentucky, Pennsylvania, Rhode Island, and Maine must get the shots. (States colored with the darkest shade of green on the below-displayed map.)

Meanwhile, laws in Nevada and Wisconsin require state government workers to get vaccinated (light shade of green on the map). Since COVID-19 vaccinations became widely available in early 2021, state officials across the country passed laws to make it illegal for public agencies and/or at least some private businesses to make people share their vaccination status.

For example, an Arkansas law prohibits government offices from requiring anyone who is seeking "entry, travel, education, or services" to carry so-called "vaccine passports" to prove that they are innoculated.

As of January 2022, nearly half of U.S. states — 22 total — had established some type of so-called ban on "proof of vaccine" requirements, according to the National Academy for State Health Policy. They are highlighted yellow in the below-displayed map. On the flip side, almost a dozen states had created online databases for residents to voluntarily share their vaccination status for other groups (such as employers or businesses) to see.

Let us note here: The state-by-state approach to laws regarding masks, vaccinations, or other issues related to the COVID-19 pandemic was a source of debate since the early months of the U.S. outbreak.

For instance, in spring 2020, some hospitals and state leaders urged the federal government to develop blanket policies for testing or splitting up a limited supply of masks and gowns for health workers. Similar concerns grew with the emergence of vaccinations months later.

Meanwhile, such initiatives at the federal level have received heavy pushback among Americans who feel they threaten the authority of states or residents' individual rights. For example, as of this writing, legal challenges had successfully stalled a proposed mandate by President Joe Biden's administration to make all employers with more than 100 workers to require vaccinations or testing, nationwide.

Markowitz, Andy. ‘Does Your State Have a Mask Mandate Due to Coronavirus?’ AARP, https://www.aarp.org/health/healthy-living/info-2020/states-mask-mandates-coronavirus.html. Accessed 31 Jan. 2022.

CDC. ‘COVID-19 and Your Health’. Centers for Disease Control and Prevention, 11 Feb. 2020, https://www.cdc.gov/coronavirus/2019-ncov/prevent-getting-sick/about-face-coverings.html.