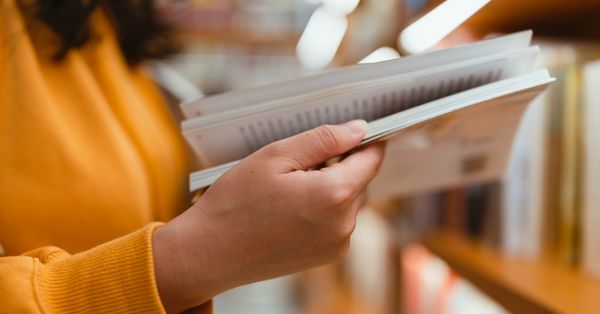 On Jan. 27, 2022, Christopher Tackett, the parent of a high school senior at Granbury High School, posted a photograph of two men hauling books out of the school library.

The boxes in the carts are labeled "Krause's list." The photograph, along with quotes from high school students who have protested the book removal, have gone viral:

The above image and quote are authentic, and reflect an ongoing effort by Republican legislators in Texas to remove books about certain social topics, like race and the LGBTQ community, from school libraries. The quote came from a high school student who spoke during the school district's Jan. 24, 2022, board meeting.

The book removals have raised questions about the legality and transparency of the process.

Carolyn Foote, a retired librarian spearheading #Freadom Fighters, a movement promoting reading and information access, told Snopes in a phone interview that the removal of books from school libraries puts professional staff like school librarians in a bind because they are bound by a higher law, namely the First Amendment.

Foote pointed to a 1982 U.S. Supreme Court ruling that determined libraries are places of voluntary inquiry and dissemination of ideas, and thus "enjoy a special affinity with the rights of free speech and press," as the online SCOTUS archive blog Oyez.org summarized.

We take a look at how the controversy evolved in Texas below.

What Is 'Krause's List' and Why Is It Important?

The letter included the list of 850 books and questions about whether districts had copies of those books and how much was spent on them, and also asked districts to identify additional content about other sensitive issues, namely:

[Human] sexuality, sexually transmitted diseases, or human immunodeficiency virus (HIV) or acquired immune deficiency syndrome (AIDS), sexually explicit images, graphic presentations of sexual behavior that is in violation of the law, or contain material that might make students feel discomfort, guilt, anguish, or any other form of psychological distress because of their race or sex or convey that a student, by virtue of their race or sex, is inherently racist, sexist, or oppressive, whether consciously or unconsciously.

We reached out to Krause's Chief of Staff Shane Birdwell via email asking what prompted Krause to create the list, and how and why the books on the list were selected. We have not received a response, but will update this story if we do.

An analysis by the literary network Book Riot found the majority of the books on the list were about LGBTQ issues.

Shortly after Krause sent the letter and the list, Texas Gov. Greg Abbott sent his own letter to the Texas Education Agency (TEA), which included a vague threat of criminal investigation.

In the Nov. 10, 2021, letter to TEA, which is an oversight agency tasked with providing administrative support to school districts, Abbott wrote that he was "directing" the agency "to investigate any criminal activity in our public schools involving the availability of pornography."

We reached out to TEA for comment but have not received a response to our emails and phone messages. But in a statement provided to the Texas Tribune, TEA expressed confusion with Abbott's letter, noting that it is individual districts, not TEA, that are tasked with managing school library content.

"In most school districts, the review and selection of individual library materials traditionally has been an administrative responsibility managed by professional district staff," the TEA statement said.

We have also reached out to Abbott's office for comment on his letter and related issues resulting from it, and will update this story if we receive a response.

Foote said she believes efforts to ban books from school libraries is political, as opposed to a genuine effort to protect students. In Virginia, a flashpoint in the race for governor was an effort to bar high school students from reading the Pulitzer Prize-winning novel "Beloved," a Toni Morrison classic about the horror and trauma of slavery, as part of the curriculum.

Republican Glenn Youngkin beat incumbent Terry McAuliffe, and Foote said that political operatives may have viewed his support for dropping the book as a winning strategy.

"I’m sure politicians in other states looked at that and thought, this is a way to garner some votes," Foote said. "But the problem for us as librarians and educators is that it's happening on the backs of kids. These are real kids who are getting the message that their identity is not acceptable, whether it’s race, or LGBTQ identity."

The effect of the list has been controversy, and arguably, chaos. Some school districts, like Austin and Dallas, have stated they have no plans to comply with Krause's request because, essentially, there is no force of law behind it. Dallas ISD called the letter an "unofficial" request.

Other districts, like Granbury and North East, have responded by pulling hundreds of books off library shelves, and, at least in the case of Granbury, rewriting district policy to accommodate doing so.

Texas state House Democrat and Public Education Committee Chairman Harold Dutton sent Krause a letter challenging the notion that Krause has any jurisdiction to make such an official request of school districts in the first place.

"It is my understanding that members of the General Investigating Committee were never advised, nor consulted, nor ever voted on your request to Texas school districts," Dutton wrote. "Ignoring House rules and the process creates an added suspicion that only you can explain."

What Happened in Granbury

Tackett said few details have been offered to the public about how the Granbury ISD book review would be conducted, who would be responsible for it, or how those people would be selected. He said the list of books was made public when he posted it on Twitter, after receiving it in response to an open records request.

"We have no clue how long the reviews will take, we have no clue about the criteria they're using, we don’t know who is on the committee," Tackett said. "With all of these things, it prompts a lot of questions about the integrity of the process."

We reached out to Granbury ISD spokesman Jeff Meador asking how the process for reviewing books taken from the school libraries will proceed.

Meador said Granbury ISD drew from Krause's list to make its own list of about 130 books to pull from the school's library shelves and put under review by a committee.

When we asked for details about how the committee will operate, who will review books, and how those reviewers were selected, Meador requested we file an open records request. We have done so, and will update this story if the relevant information is provided.

The Granbury district's actions and Tackett's tweets have created an uproar, resulting in viral stories and national news coverage.

At a Jan. 24 school board meeting, some students sharply criticized the district's decision to pull the books, resulting in name-calling by the district superintendent, who said critics were "gaslighters" intending to "incite division."

Meador pointed to a school district statement outlining the board's discretion to select books for removal. In that Jan. 27 statement, the district said:

"School board trustees recently amended local district policy to allow removal of 'materials because they are pervasively vulgar or based solely upon the educational suitability of the resource in question.'"

Meador told Snopes that as of this writing, only five books, by Young Adult genre novelist Abbi Glines, were removed from schools permanently.

"All others are only off the library book shelves pending the review, which will begin this week," Meador stated by email on Monday, Jan. 31, 2022.

Many of the books on the list provided by Meador are clearly not "pervasively vulgar," as they have to do with the history of racism. Titles include a book about the history of the KKK. Many others deal with LGBTQ issues. One title deals with bioethics.

When asked whether the district followed its own rules in undertaking the book removal and review process, Meador pointed us to a legal policy that states:

Students' First Amendment rights are implicated by the removal of books from the shelves of a school library. A district shall not remove materials from a library for the purpose of denying students access to ideas with which the district disagrees. A district may remove materials because they are pervasively vulgar or based solely upon the educational suitability of the books in question.

A statement Meador made to the local Hood County News, however, pointed to political preferences being at least part of district officials' motivation:

While we acknowledge some parents and community members will not agree with the potential removal of any book, we understand the conservative climate of our community and that a large majority recognizes that several social and cultural topics are best left to parents and families to discuss with their children

"School district policies are sort of a trust commitment between the administration and the staff, the school board and the teachers, and the school and the community," Foote noted. "The trust is that we created these policies and this is how we interact with each other. When things start happening that venture beyond the published polices and aren’t done in a transparent manner, it creates a lot of distrust with the community at large or within the school community, because you have broken that contract."

Foote said that the controversy has had a chilling effect on educators and school district professionals, and while some districts have chosen to stand up to pressure to remove books, others have taken steps like resorting to self-censorship, even if it violates their own district policies, to avoid acrimony.

Foote also said students pay the price for efforts to take books from their libraries that could help them get through challenging moments in their lives. And the nature of the books being targeted sends the message that certain minority groups are not welcome in the public schools.

"The truth of the matter is our students do live in the real world," she said. "There are students in our schools who are facing abuse, and reading a story about someone else who overcame it could really be powerful for that student. We have LGBTQ students in our schools who are struggling with acceptance, or maybe bullying. Reading about how another LGBTQ character came through that experience is important for them. Same thing with books about race. All of those stories speak to someone."