Aircraft radar altimeters operate on what's known as C-Band between 4.2-4.4GHz, while 5G service was set to deploy within the 3.7-3.98 GHz frequency range. 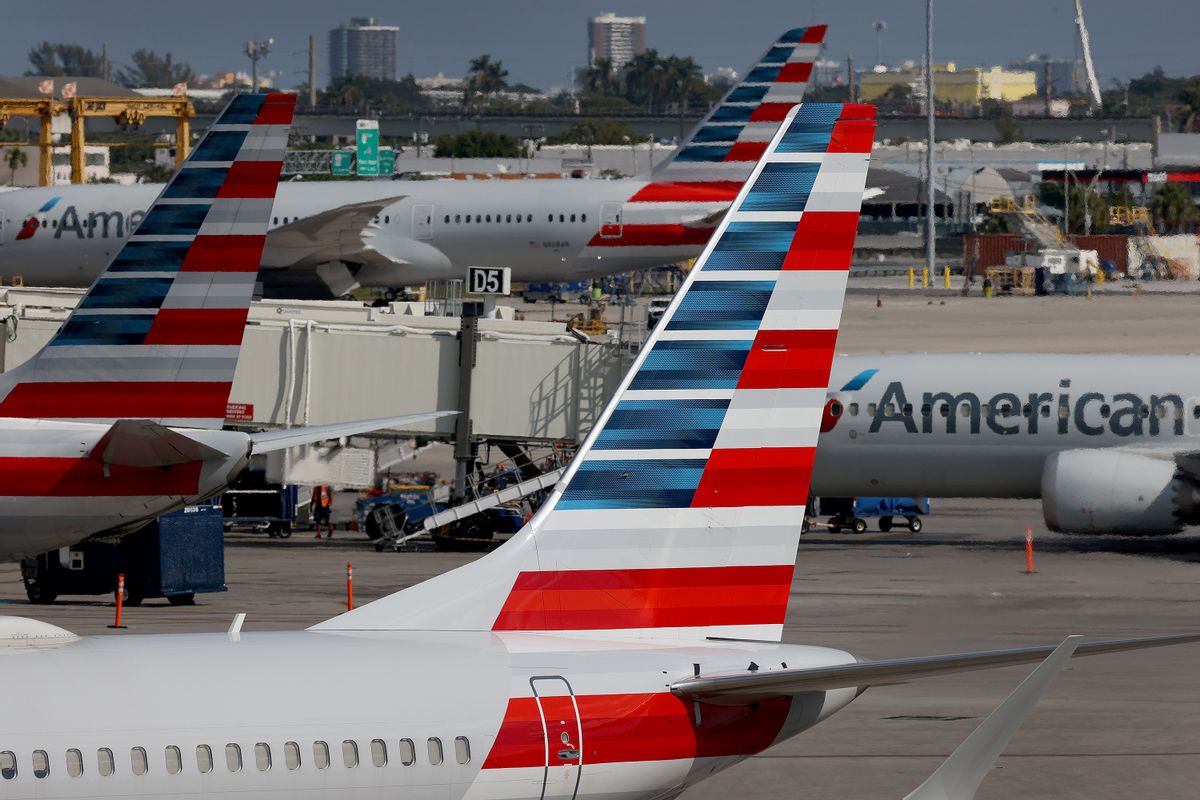 On Jan. 17, 2022, Reuters published the headline: "Major U.S. airlines warn 5G could ground some planes, wreak havoc." The reporting documented a letter sent by the airline industry to U.S. government officials asking that AT&T and Verizon implement 5G "everywhere in the country" on Jan. 19, as planned, "except within the approximate 2 miles of [50 large airport runways]."

The concerns, which were not new, purportedly stemmed from the idea that the planned deployment of the 5G wireless networks could interfere with radio altimeters. Both 5G networks and aircraft altimeters use different frequencies on what's known on the radio spectrum as C-Band.

On Jan. 18, the day after the letter was published, AT&T and Verizon both said they would once again delay a small percentage of their 5G service deployment "near key airports." U.S. President Joe Biden thanked both companies for agreeing to do so.

Conspiracy theories about 5G networks have been around for at least a few years. However, in this case, it didn't appear to involve a conspiracy theory. Instead, this appeared to be a matter of the Federal Aviation Administration (FAA) and the airline industry aiming for precautions to be taken before the 5G networks launched, despite the two telecom giants insisting they were unnecessary.

Here's what we found in our research.

"The new high-speed 5G service uses a segment of the radio spectrum that is close to that used by altimeters, which are devices that measure the height of aircraft above the ground," the Associated Press reported.

In 2020, in order to resolve safety concerns, the Federal Communications Commission (FCC) determined that "C-Band could be used safely in the vicinity of air traffic." It established "a buffer between the 5G band and the spectrum that planes use."

What does this look like in terms of frequencies? In December 2021, Aviation Today broke down the numbers:

Radio spectrum, according to the U.S. Department of Transportation, is divided into different frequency bands that have been allocated for data, voice, and wireless communications used by a variety of different industries. Aircraft radar altimeters operate within 4.2–4.4 GHz, the lower half of which falls within the C-Band — a frequency range from 3.7–4.2 GHz where the combination of the range of signal transmissions and capacity are optimum.

The 5G wireless networks scheduled to be switched on by AT&T and Verizon next month will occur within the 3.7–3.98 GHz frequency range, close to the altimeters. As the FAA indicated in its Dec. 7 AD, while it has heard concerns from airlines, the FAA, and aircraft OEMs over the potential interference issues posed by the deployment of 5G in the C-Band, it has not yet been presented with data or information that shows altimeters are not susceptible to interference.

The letter from the airline industry, dated Jan. 17, documented a request for yet another delay in the deployment of AT&T and Verizon 5G wireless networks within 2 miles of runways at 50 large airports. It claimed that the 5G deployment would result in a "major disruption" that would cause "harmful impacts on the aviation industry, traveling public, supply chain, vaccine distribution, workforce, and the broader economy." The reason was due to FAA regulations that required radio altimeters to be properly approved for safety, something the airline industry argued couldn't be accomplished for all critical aircraft before Jan. 19.

The airline industry warned that the deployment of 5G wireless networks could potentially lead to "incalculable" and "catastrophic" results, again referring to grounded flights. "To be blunt, the nation's commerce will grind to a halt," the airlines claimed. A United Airlines airplane proceeds to a gate at Newark Liberty International Airport as the sun rises behind the skyline of lower Manhattan and One World Trade Center in New York City on December 13, 2021, in Newark, New Jersey. (Photo by Gary Hershorn/Getty Images)

United Airlines also published its own news release on the subject, specifying the purported dangers not only to aircraft altimeters, but also to "autopilot, heads-up displays, terrain warning, and pitch control." It said that this "will result in significant restrictions on 787s, 777s, 737s and regional aircraft in major cities like Houston, Newark, Los Angeles, San Francisco, and Chicago."

Aligned with the airline industry's concerns was the FAA. Reuters reported that the FAA "warned that potential interference could affect sensitive airplane instruments such as altimeters and significantly hamper low-visibility operations."

The FAA wrote that it requires all radar altimeters to be "accurate and reliable," saying that it had found some altimeters fit this criteria "in the 5G areas," but that "others must be retrofitted or replaced."

After we contacted the FAA, the agency pointed us to a Safety Alert for Operators (SAFO) notice from Dec. 23, 2021. It detailed the specific concern that had caused multiple delays in the deployment of 5G wireless networks:

The radio altimeter is more precise than a barometric altimeter and for that reason is used where aircraft height over the ground needs to be precisely measured, such as during autoland or other low altitude operations. The receiver on the radio altimeter is typically highly accurate, however, it may deliver erroneous results in the presence of out-of-band radiofrequency emissions from other frequency bands. The radio altimeter must detect faint signals reflected off the ground to measure altitude, in a manner similar to radar. Out-of-band signals could significantly degrade radio altimeter functions if the altimeter is unable to sufficiently reject those signals.

In an email, a spokesperson for the FAA told us: "Our concerns are mostly focused on what happens when [5G] transmitters malfunction and send out signals that don't stay within their band or are at such power levels that they bleed over."

The agency also published on its website that it doesn't make assumptions when it comes to safety:

Aviation in the U.S. is the safest in the world. That’s because we rely on data to mitigate risk, and never assume that a piece of equipment or a given flight scenario is safe until this can be demonstrated. If there’s the possibility of a risk to the flying public, we are obligated to restrict the relevant flight activity until we can prove it is safe.

In other words, the FAA was saying that it was taking precautions to ensure that radio altimeters were properly checked and approved prior to the Jan. 19 deployment of 5G near 50 large airports, in the event that those telecommunications signals potentially landed outside of the approved frequency range on C-Band.

The Associated Press published an explainer on the back-and-forth, saying that AT&T and Verizon had "dismissed" the airline industry's concerns:

The wireless industry trade group Cellular Telecommunications Industry Association (CTIA) notes that about 40 countries have deployed the C-Band strand of 5G without reports of harmful interference with aviation equipment.

But AT&T CEO John Stankey and Verizon CEO Hans Vestberg did offer to reduce the power of their 5G networks near airports, as France has done.

“The laws of physics are the same in the United States and France,” Stankey and Vestberg said in a letter Sunday to [Secretary of Transportation Pete] Buttigieg and [Federal Aviation Administration Administrator Stephen M.] Dickson. “If U.S. airlines are permitted to operate flights every day in France, then the same operating conditions should allow them to do so in the United States.”

As previously noted, after the letter from the Reuters report was published, AT&T and Verizon both agreed to yet another delay to a small percentage of their 5G network rollout on Jan. 19.

According to the Global mobile Suppliers Association, it's true that 5G was already deployed in more than 40 countries. The Cellular Telecommunications Industry Association (CTIA), which "represents the U.S. wireless communications industry and companies throughout the mobile ecosystem," published a video that showed a map of the locations:

According to the CTIA-sponsored website, 5gandaviation.com, C-Band was chosen for 5G networks because its radio waves can "deliver high speeds over a wide geographic area."

In its FAQ, the CTIA published: "In fact, in some of these countries, 5G signals use radio waves that are much closer to those used by aviation equipment without causing harmful interference." This appeared to be true of Japan, for example.

The FAA responded to this as well, saying: "Deployments of 5G technology in other countries often involve different conditions than those proposed for the U.S., including lower power levels, antennas tilted downward to reduce potential interference to flights, different placement of antennas relative to airfields, and frequencies with a different proximity to frequencies used by aviation equipment."

As of Jan. 18, it's unclear when the small percentage of 5G deployments near the aforementioned 50 large airports will eventually occur. This story will be updated should more details come to light.