Pope Francis on Pets Over Kids: Full Transcript and Video

Here is the full transcript and the video of Pope Francis' remarks on adoption, children, and pets. 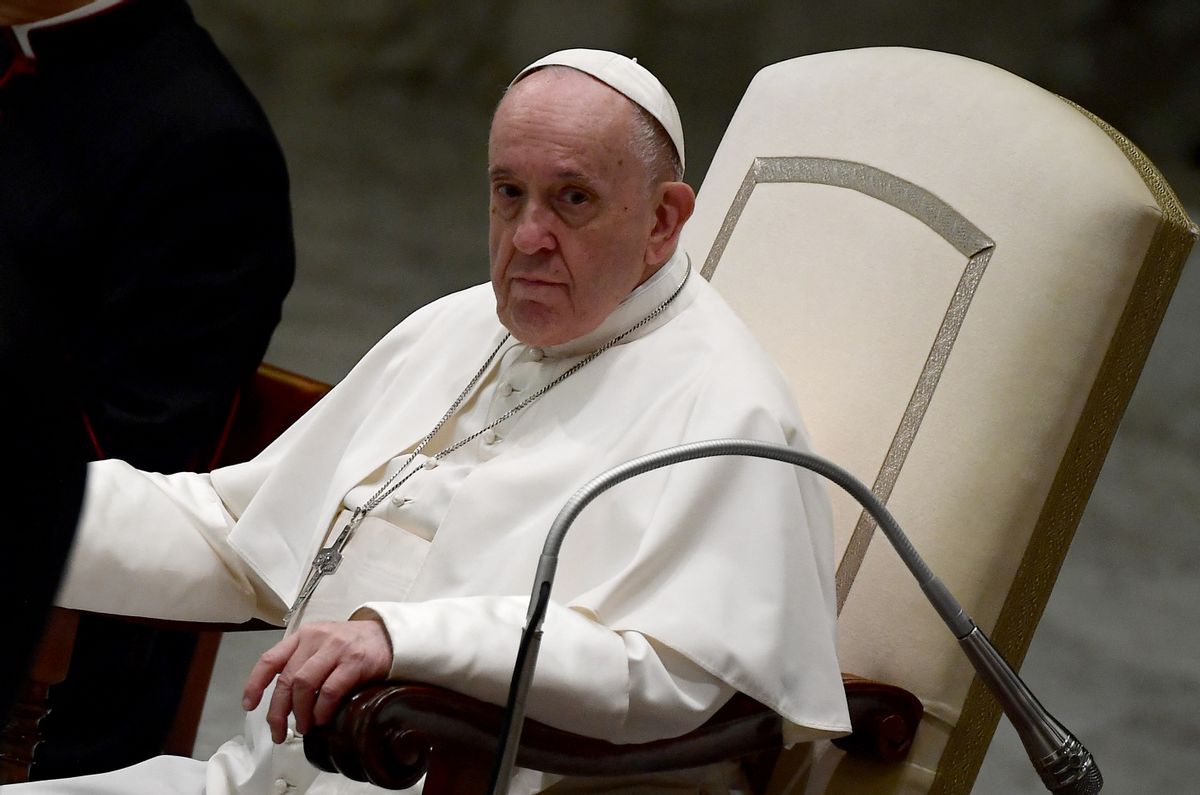 On Jan. 5, 2022, Pope Francis used the word "selfishness" before making brief remarks about people who choose pets over children as well as parents who only have one child. The larger message of the speech was primarily about encouraging the adoption of kids. The setting was what's known as the Holy Father’s General Audience in Paul VI Hall in Vatican City.

A headline from the BBC read: "Pope Francis says choosing pets over kids is selfish." Fox News reported: "Pope criticizes couples who adopt pets instead of children: 'a form of selfishness.'" CNN also published: "Opting for pets over children is selfish and 'takes away our humanity,' says Pope Francis." The news was reported by most major news organizations.

These headlines stirred controversy and received quite a bit of backlash on social media. For example, one of CNN's tweets received nearly 50,000 responses when replies and quote tweets were combined. The majority of the comments with the most retweets and likes disagreed with the pope's remarks as represented in the headlines.

What was the full context of Francis' remarks about pets and kids, and what was said about being selfish?

One thing was lacking from these reports: the transcript. The Vatican's website appeared to have not received a design overhaul since it was launched in the 1990s, which made it a bit difficult to find.

However, we eventually located the full remarks, which can be read here. (The page showed the incorrect year of 2021, but the website address was filed under 2022.) He began: "Today we will reflect on Saint Joseph as the father of Jesus." After reciting a number of Bible verses and talking about Joseph and "orphanhood," Francis then made the remarks about pets, only referring by name to cats and dogs. He also seemed to briefly speak on the subject of infertility and said that "fatherhood and motherhood are the fullness of the life of a person."

Here is that portion of the speech, which was presented as one paragraph in the official transcript:

It is not enough to bring a child into the world to also be the child’s father or mother. “Fathers are not born, but made. A man does not become a father simply by bringing a child into the world, but by taking up the responsibility to care for that child. Whenever a man accepts responsibility for the life of another, in some way he becomes a father to that person” (Apostolic Letter Patris corde). I think in a particular way of all those who are open to welcome life by way of adoption, which is such a generous and beautiful, good attitude. Joseph shows us that this type of bond is not secondary; it is not an afterthought, no. This kind of choice is among the highest forms of love, and of fatherhood and motherhood. How many children in the world are waiting for someone to take care of them! And how many married couples want to be fathers and mothers but are unable to do so for biological reasons; or, although they already have children, they want to share their family’s affection with those who do not have it. We should not be afraid to choose the path of adoption, to take the “risk” of welcoming children. And today, with orphanhood, there is a certain selfishness. The other day, I spoke about the demographic winter there is nowadays, in which we see that people do not want to have children, or just one and no more. And many, many couples do not have children because they do not want to, or they have just one – but they have two dogs, two cats… Yes, dogs and cats take the place of children. Yes, it’s funny, I understand, but it is the reality. And this denial of fatherhood or motherhood diminishes us, it takes away our humanity. And in this way civilization becomes aged and without humanity, because it loses the richness of fatherhood and motherhood. And our homeland suffers, as it does not have children, and, as it has been said somewhat humorously, “and now who will pay the taxes for my pension, if there are no children?”: with laughter, but it is the truth. Who will take care of me? I ask of Saint Joseph the grace to awaken consciences and to think about this: about having children. Fatherhood and motherhood are the fullness of the life of a person. Think about this. It is true, there is the spiritual fatherhood of those who consecrated themselves to God, and spiritual motherhood; but those who live in the world and get married, think about having children, of giving life, which they will take from you for the future. And also, if you cannot have children, think about adoption. It is a risk, yes: having a child is always a risk, either naturally or by adoption. But it is riskier not to have them. It is riskier to deny fatherhood, or to deny motherhood, be it real or spiritual. But denial, a man or woman who do not develop the sense of fatherhood or motherhood, they are lacking something, something fundamental, something important. Think about this, please.

Francis' mention of pets was only a small part of the complete remarks and larger message. A summary at the bottom of the same page did not mention pets:

Summary of the Holy Father's words:

Dear Brothers and Sisters: In our continuing catechesis on Saint Joseph, we now consider Joseph's dignity as the foster-father of Jesus, born of the Virgin Mary. As Mary's husband and Jesus' legal father, Joseph had all the rights of a father, including that of naming their child. Yet Joseph had learned from the angel that, in God's plan, Mary's Son was to be named Jesus, which means "the Lord saves." Joseph's docility to God's will and his fatherly care for the child Jesus can teach us much about the authentic meaning of parenthood. To be a mother or father is not simply a matter of biology; more profoundly, it entails caring for the life of a family. In this sense, one of the highest forms of parenthood is to take on the responsibility of becoming adoptive parents, prepared to welcome an orphaned or abandoned child as part of one's own family. Let us pray that through Joseph's intercession, fathers of families will be given the grace to respond to their noble vocation, and that the many children in our world who long for a secure and loving home will find a welcome on the part of good and generous families.

The portion of the full remarks highlighted above also appeared in a video on the Vatican's official YouTube channel, ranging from 18:00-22:52:

The remarks and other speakers later ended with a circus performance by Rony Roller. Members of the Rony Roller circus perform during Pope Francis' general audience at the Paul VI Hall in the Vatican on January 5, 2022. (Photo by FILIPPO MONTEFORTE/AFP via Getty Images)

Francis previously addressed the issue of choosing pets over children in 2014, saying that choosing to not have children would end with bitterness and loneliness in old age:

These marriages, in which the spouses do not want children, in which the spouses want to remain without fertility. This culture of well-being from ten years ago convinced us: 'It's better not to have children! It's better! You can go explore the world, go on holiday, you can have a villa in the countryside, you can be care-free… it might be better – more comfortable – to have a dog, two cats, and the love goes to the two cats and the dog. Is this true or is this not? Have you seen it? Then, in the end, this marriage comes to old age in solitude, with the bitterness of loneliness. It is not fruitful, it does not do what Jesus does with his Church: He makes His Church fruitful.

In sum, Francis urged the world to consider adoption. During one part of the remarks, he explained that he believed there to be a "selfishness" from people who do not want to have children or from those who only have one child. In the same portion of the remarks, he also mentioned his disagreement with people who choose pets over adopting kids.