At no point did we expect that gorilla sex or ivermectin-soaked tampons would make headlines this year. 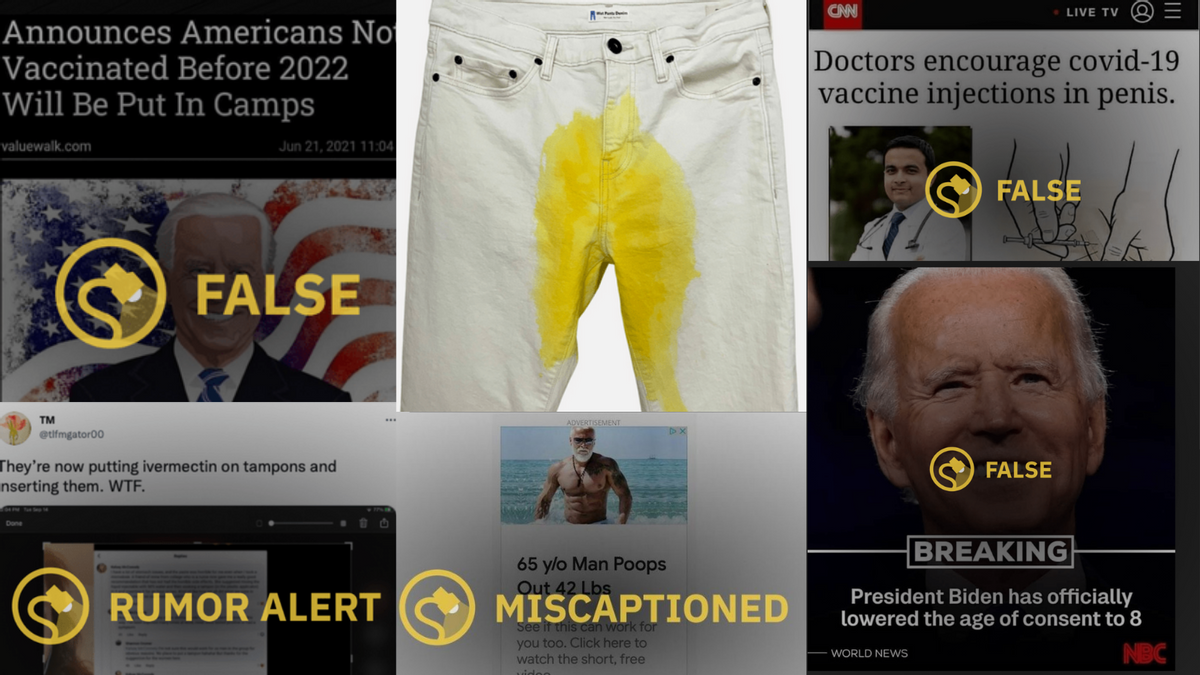 Heading into 2021, the Snopes newsroom was in a steady routine of fact-checking election fraud rumors, COVID-19 denial claims, and pseudoscientific arguments against vaccinations. We were prepared for misleading memes or videos around those issues to keep surfacing — and they did.

But, as the year progressed, Snopes fact checkers addressed rumors that no one could have planned for.

Take a NSFW video that seemingly showed two gorillas “going down” on each other; a purported Facebook thread showing users touting ivermectin-soaked tampons as a method to overcome COVID-19, or videos and memes promoting the scientifically illiterate claim that drinking apple juice can increase a person's penis size.

More topics that Snopes staff members said they couldn't believe needed fact-checking in 2021 are listed below. You can read all of our “Staff Picks & Standouts” for a variety of content categories here.

False. We tracked down the origins of the rumor that was displayed in online advertisements. Did Greta Thunberg Disguise Herself as Pro-Trump Rioter?

False. An uncredited meme would not likely be the first to report the discovery. Were Gorillas at Bronx Zoo Filmed Engaging in a Sex Act?

True. A NSFW video appeared to show two gorillas “going down” on each other.

Whether one should is another question entirely. Did California Man Find Shrimp Tails in His Cereal Box?

Unproven. The same person also shared photos that appeared to show various other contaminants in the same box of Cinnamon Toast Crunch.

Are Goat and Sheep Feces Drinks Being Sold in China?

False. The idiom “pooh-pooh” is used to dismiss arguments, opinions, or rumors that are not worthy of consideration. Did FloraSpring Help a 65-Year-Old Man ‘Poop Out 42 Pounds’?

Miscaptioned. Online advertisements for the FloraSpring weight loss supplement led users to pictures and video of Dr. Steven Masley, and mentions of a “pooping habit.” No, Biden Did Not Say Unvaccinated Americans ‘Will Be Put in Camps’

Conspiracy theorists seized upon a supposedly satirical article, and deployed it as inflammatory disinformation against the president. No, Joe Biden Did Not Lower the Age of Consent to 8

Fake screenshots of nonexistent CNN and NBC stories were the latest installment of a set of conspiracy theories completely detached from reality. Does Video Show Athletes Fainting Due to COVID-19 Vaccine?

Miscaptioned. A series of fear-mongering videos were circulated on social media with unsubstantiated and false claims. False. Social media users shared a pair of bizarre claims about the supposedly unique effects of COVID-19 vaccines on men. False. This rumor is little more than a conspiratorial game of Mad Libs. No, Don’t Use Ivermectin-Soaked Tampons as COVID-19 Prevention

A purported Facebook thread showed users discussing soaking tampons with the anti-parasitic drug ivermectin — the medication that people against COVID-19 vaccinations have falsely promoted as a “miracle” solution for preventing or treating the disease.