It's nice to have a bit of Disney Parks news to take one's mind off the more important developments happening around the world. 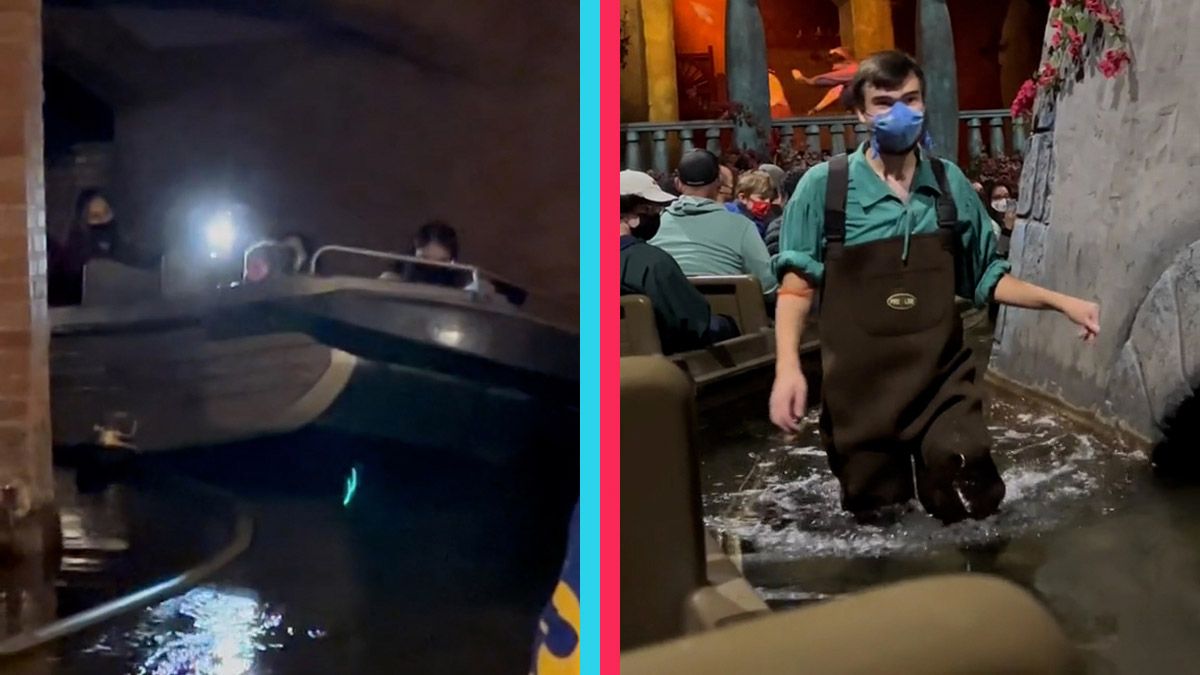 Park guests on Disneyland's Pirates of the Caribbean ride had to evacuate the night of Dec. 17, 2021, after one of the boats derailed, according to TikTok videos.

Yes, theme park rides break down all of the time. However, it's not every day that one of the old pirates boats decides to chart a new course.

A video from TikTok user @magical_disney_day showed that one of the boats derailed, going off of the intended track, leaving the passengers a bit tilted. It's unclear what caused this to happen, but it may have been the result of multiple boats bumping into it from behind. We were able to confirm the date the incident occurred by contacting the user.

We found no reports of injuries.

In a second and perhaps more interesting video from the @eat.sleep.disney TikTok channel, riders were shown being helped off of the pirates boats by what appeared to be some of the park's safety personnel and mechanics. The clip also featured Disneyland cast members in waders walking through the water to help evacuate guests.

The @eat.sleep.disney TikTok account commented that some people were stuck for around 90 minutes. The Pirates of the Caribbean ride in Anaheim, California. Courtesy: Disneyland Park

TikTok user @veronicaduran2001 also said in a comment: "This happened to us! We were stuck for over 2hrs! We went to guest services after and they gave us $100 gift cards each!" It's unclear if Duran was in the derailed pirates boat that was tilted.

In other comments, people who said they were on the pirates ride seen in the videos claimed they were given FastPasses so they could return and skip the line later when it reopened.

The Pirates of the Caribbean ride is a water attraction at Disneyland and at Walt Disney World Resort in Orlando, Florida, as well as at other Disney-operated parks around the world. It began operating at Disneyland in 1967.

Strike yer colors! Your adventure begins in a shadowy bayou, where you’ll board a weathered barge. Plunge down a waterfall in the dark and float through the spectral world of Pirates Grotto. Dead men tell no tales—but they guard their treasure for all eternity.

Navigate cannon fire between a fort and a 12-gun galleon. Glide into port and behold brazen buccaneers drunk on pillaged plunder. Skulk past the well-armed lass who commands a colorful auction of villagers’ goods.

Sing along as sea roving scalawags serenade you with their classic shanty, “Yo Ho (A Pirate’s Life for Me).” Witness flames engulf the town and pass prisoners trapped in their jail cell, doggedly trying to escape.

Keep a spry eye out for sly Captain Jack Sparrow from the "Pirates of the Caribbean" film series, as he schemes to get his hands on the spoils.

If ye be seekin’ adventure, ay—you’ve come to the proper place!

According to The Walt Disney Company, the ride is "considered one of the most immersive attractions ever created for a theme park." For the riders in the video who derailed on pirates, this line direct from Disney couldn't have been more true: "If ye be seekin’ adventure, ay—you’ve come to the proper place!"