The picture appeared in memes that seemed to push misogyny and political conservatism. 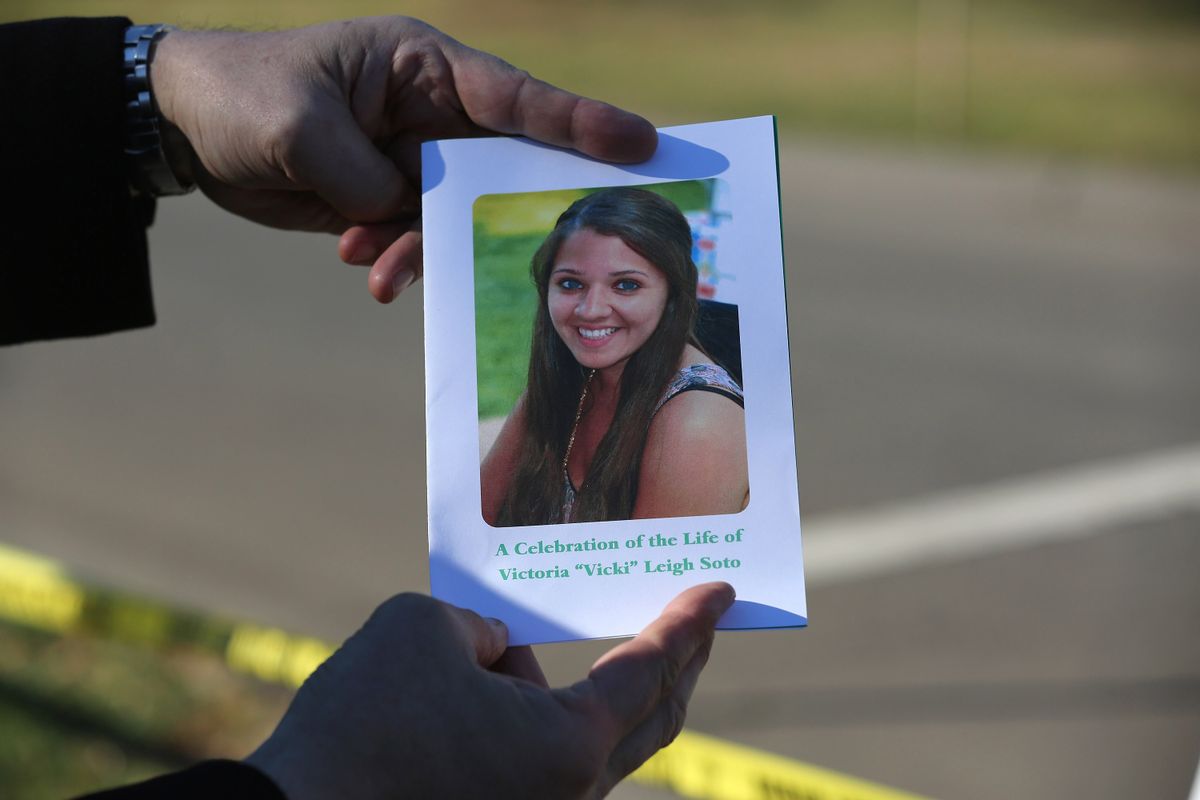 One of the most iconic photographs captured in the aftermath of the deadly shooting at Sandy Hook Elementary School is being misused in Facebook memes about misogyny and political conservatism. The ninth anniversary of the Dec. 14, 2012, mass shooting in Newtown, Connecticut, takes place in less than two weeks.

The picture was originally taken by Associated Press photographer Jessica Hill. The official AP caption read: "In this Dec. 14, 2012 file photo, Carlee Soto uses a phone to get information about her sister, Victoria Soto, a teacher at the Sandy Hook Elementary School in Newtown, Conn., after gunman Adam Lanza killed 26 people inside the school, including 20 children. Victoria Soto, 27, was among those killed."

This is the original photograph:

On Nov. 29, 2021, a Facebook account named Helen Lanning, which had 36,000 followers, posted a meme with the AP picture of Soto crying on the phone. It was captioned with: "Your truck has 3 pedals and I've only got 2 feet. You should have known there would be issues having a liberal girlfriend."

We also found dozens of public Facebook posts that featured the words with Soto's picture. It's unclear how many private posts also posted the meme. Some only included the top part of the caption about the truck and pedals. We chose to not republish the meme in this article.

For years, a number of baseless conspiracy theories have surrounded the mass shooting at Sandy Hook. Those conspiracy theories included plenty of instances of photographs being misused to spread falsehoods about the victims, family members, and others.

We found multiple comments on the recent Facebook meme posts that claimed Soto was a "crisis actor," which was false. This was one of the baseless conspiracy theories that for years has been posted on social media. Alex Jones, the far-right conspiracy theorist who owns Infowars, originally spread the false conspiracy theory that the incident at Sandy Hook was a "giant hoax" and that the people involved were "crisis actors."

On Nov. 15, 2021, NBC News reported that Jones "was found liable for damages in lawsuits brought by parents of children killed in the shooting."

Monday's ruling marks the fourth defamation lawsuit Jones has lost against Sandy Hook families, three of them in Texas.

Jones outraged Sandy Hook parents by falsely claiming that the mass slaughter was staged by crisis actors whose goal was to overturn the Second Amendment. He later acknowledged that the massacre occurred. His lawyers defended his speech in court as "rhetorical hyperbole" and denied that it was defamation.

Lawyers for the parents claimed that Jones and his companies, including Infowars and Free Speech Systems, violated court rules by failing to turn over documents, including internal company documents showing whether and how Jones and Infowars profited from talking about the school shooting and other mass shootings.

Jones also recently made the news for a separate matter when he was subpoenaed by a committee investigating the Jan. 6 U.S. Capitol insurrection. A casket with the remains of Victoria Soto, age 27 arrives for a funeral at Lordship Community Church December 19, 2012 in Stratford, Connecticut. (Courtesy: BRENDAN SMIALOWSKI/AFP via Getty Images)

Soto, the former Sandy Hook teacher, who was better known by those around her as "Vicki," is now remembered with the Vicki Soto Memorial Scholarship and the Miss Soto's Literacy Program. In a brief bio about her life, it mentioned that her favorite holiday was Christmas:

Vicki was first and foremost the loving first child of Donna and Carlos Soto of Stratford, CT. She was born on November 4, 1985, and was a joy to all who knew her from the moment she was born. She was a fun-loving sister to Jillian, Carlee and Carlos Mathew. Most important to her were the “SOFACRO” gang, as the cousins call themselves. Vicki was the glue that held this family together. She was the one organizing all family events, including her favorite holiday, Christmas. She was the only one who could pick out that perfect tree! Secret Santa was a family tradition, as were outings with her cousins as often as they could all get together. She was a ball of energy and was always up for anything! Vicki had many friends and saw them often, but no one could ever replace her Rachel. They were like sisters since meeting in their early days of college. She also loved her black lab Roxie, who she would dress up – yes, dress up – and call her “Rita,” “Rita Ann,” “Rooney” and “Angela,” for no apparent reason.

Not only was she beautiful on the outside, with those gorgeous blue eyes, but she was smart. Some may even say “perfect” and funny with a laugh that was contagious. Although she was taken from us far too soon, Vicki lived life every day and knew beyond her years how precious life truly is. Her mantra was: Live, Laugh, Love. Every single day Vicki did just that. She lived life passionately, laughed often, and loved unconditionally.

The victims in the shooting in Newtown, Connecticut, were as follows: