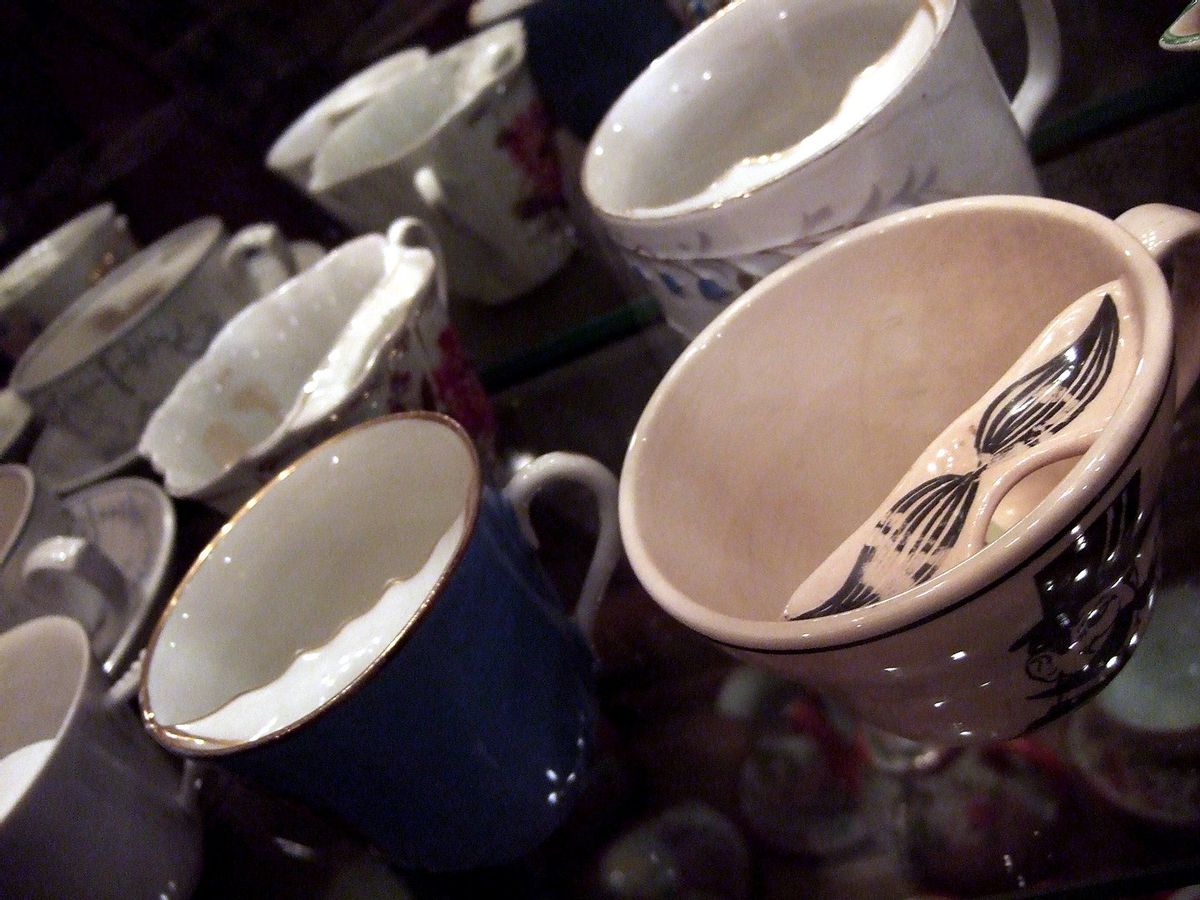 Victorian manhood was big on perfectly groomed mustaches. The era that encompassed the 1820s into the early 1900s was the peak time for facial hair etiquette, involving numerous manuals and grooming products.

Drinking tea was as important as mustache maintenance at the time, and it was heavily ingrained into British life. Of course, hot tea can be perilous for a heavily waxed mustache, causing it to melt and send its corners dropping from its original proud perch.

Cue the Victorian-era mustache cups, an invention that was very real and popular, and that someone on Reddit recently learned was a thing:

The Victorian mustache cup is widely believed to have been invented by Harvey Adams, a potter. He reportedly created it in the 1870s, according to Atlas Obscura, but a BBC entry claims it was created in 1860. The Rosenberg Library Museum of Galveston, Texas, claims they were invented in 1830.

Llewellyn Frederick William Jewitt, an illustrator and author, wrote in 1878’s “The Ceramic Art of Great Britain: From Pre-historic Times Down to the Present Day: Being a History of the Ancient and Modern Pottery and Porcelain Works of the Kingdom: and of Their Productions of Every Class,” that this invention came about around the 1860s. Per Volume 2 of “The Ceramic Art of Great Britain,” the cup emerged as part of a series of works that began in 1862.

He wrote about the work of the firm Harvey Adams & Co.:

In tea and breakfast services many novel, but at the same time chastely beautiful designs, have been introduced by this firm, who have also the credit of being the first to make and introduce “moustache cups”—an invention that has become so popular as to be adopted by many other firms.

According to the tourism website for Stoke-on-Trent in England where Adams was based, he worked as a potter from 1860 through 1895, with his own potbank from 1869 to 1885. He was “a local councillor, radical non-conformist, innovator and the inventor of the 'moustache cup' which had a ledge to keep the moustaches of Victorian gentleman dry while they drank their tea.”

As per Atlas Obscura, the cup protected mustaches via a “a secret shelf, set inside the cup and shaped like a butterfly, with a hole to drink through,” which is basically a sippy cup. The cup was popular at first in the U.K., then Europe, then sold across the United States in large department stores like Sears and Macy’s. They also came in all shapes and sizes.

According to Wellington County Museum and Archives in Canada, the mustache was a “symbol of masculinity,” and men took great pride in maintaining their firm and stiff facial hair. Often they carried small combs, added a bit of wax, and even dyed their mustaches. This is where the cup came in handy:

However, during afternoon tea the heat from the tea would cause the wax to melt and the dye to run making for a very embarrassing moment, not to mention a now unkempt moustache.

The moustache cup solved this problem, becoming all the rage and an essential part of a proper household tea service between about 1860 and 1916. Available in most china patterns, they could even be customized with the owner's name or initials and typically came with a matching saucer. Unfortunately, however, the moustache and the cup fell out of favour around World War One when it became difficult for men to maintain these grooming habits in the trenches. Facial hair also made it difficult to get a tight seal of a gas mask on the face which was extremely dangerous as chemical weapons were a major component of the war.

Antiques or replicas of the mustache cup can still be found online.

Frost, Natasha. “A Look Back at the Mustache Cups That Kept Tea-Drinkers’ Whiskers Dry.” Atlas Obscura, 31 May 2017, https://www.atlasobscura.com/articles/mustache-cups. Accessed 15 Nov. 2021.

Jewitt, Lleywellynn Frederick William. The Ceramic Art of Great Britain From Pre-Historic Times Down to the Present Day : Being a History of the Ancient and Modern Pottery and Porcelain Works of the Kingdom : And of Their Productions of Every Class. Virtue and Company, limited, 1878. Austrian National Library. Accessed 15 Nov. 2021.