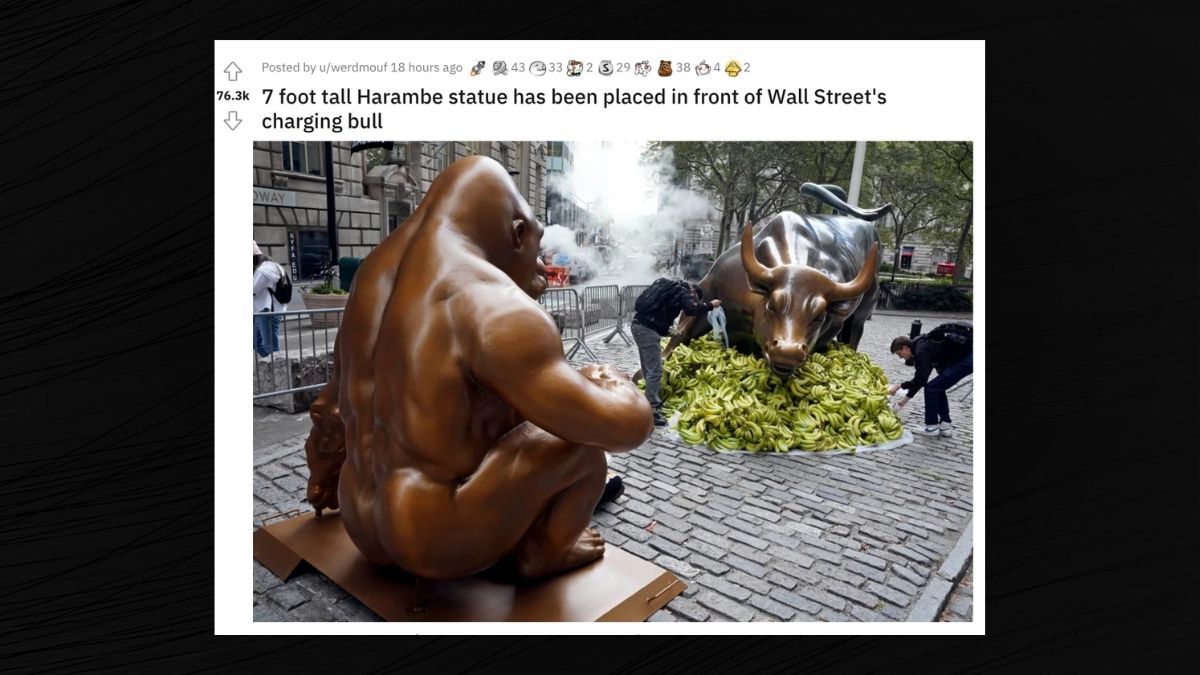 A gorilla faced a bull in Manhattan’s Financial District in mid-October 2021.

Thankfully, they were statues and not real animals. Wall Street’s famous "Charging Bull" was stared down by a 7-foot-tall statue of the famous Cincinnati Zoo gorilla Harambe on Oct. 18, 2021.

A picture of the two went viral across various social media platforms:

The 7-foot statue was placed there by a social networking platform Sapien.Network, alongside 10,000 bananas surrounding the feet of the Charging Bull. The organizers said they put up the display to show that Wall Street had gone “bananas.” The 10,000 bananas will reportedly be donated to local food banks.

The co-founders of Sapien.Network said they used Harambe to symbolize the millions of people who had suffered from the U.S. capitalist system.

Harambe was a gorilla in Cincinnati Zoo who was shot dead by a zookeeper in May 2016, after the zookeeper feared for the life of a child who had fallen into the gorilla’s enclosure. But the gorilla never behaved aggressively toward the child. Some even claimed that the ape appeared to be protecting the child, who ultimately survived. The incident resulted in international outrage.

"Though the gorilla never acted aggressively toward the child, Harambe was shot by zookeepers who were fearful for the child’s safety," the Sapien.Network explained. "[...] the bronze statue of Harambe, contrasted with the bronze Charging Bull of Wall Street, represents the millions of everyday people who struggle under a system that enriches wealthy elites and leaves the average person behind."

This isn’t the first art installation to face off with the bull. In mid-2017, a bronze statue titled “Fearless Girl” showed a young girl also standing in front of the bull with her hands on her hips. The statue stayed in that location until 2018.