Within hours of the attacks, misinformation emerged online. It would be the start of a two-decade expansion and elevation of internet conspiracy theories. 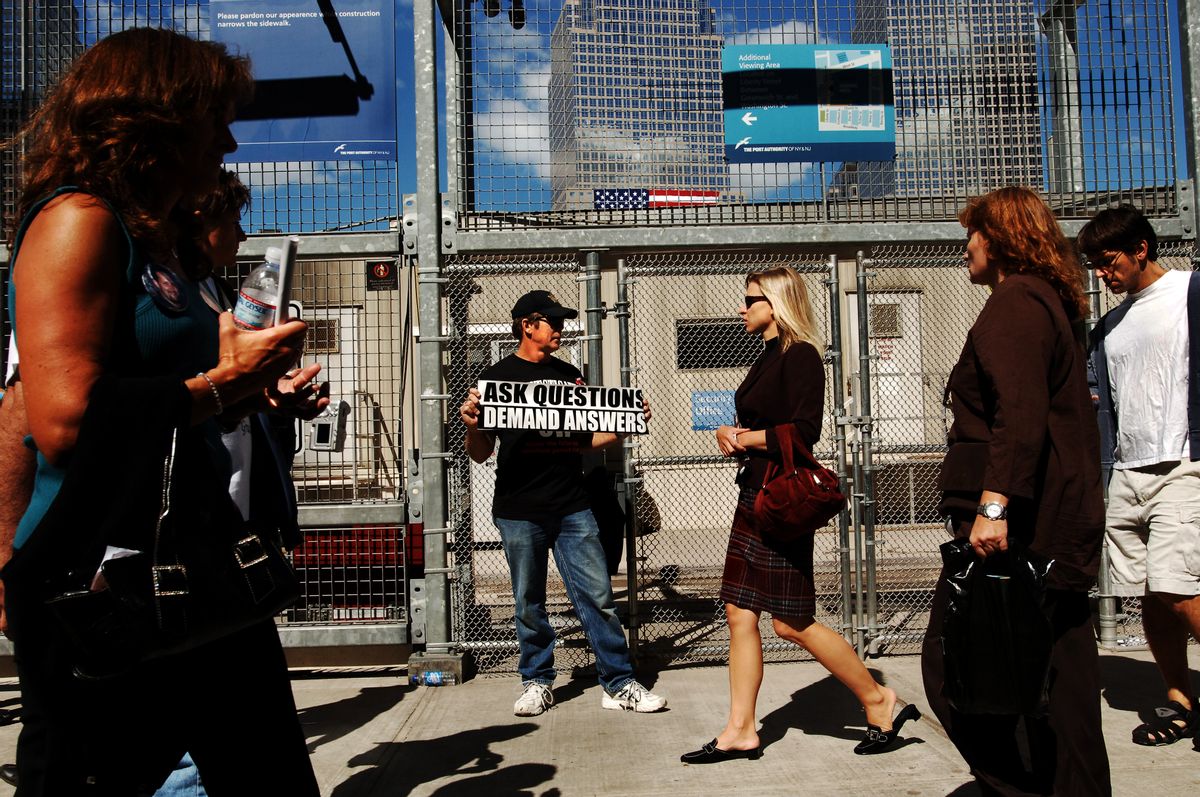 The events of Sept. 11, 2001, had a profound effect on almost every aspect of modern life, in the United States, and far beyond. The attacks themselves killed thousands, of course, and led to wars that cost hundreds of thousands of lives and trillions of dollars in spending. The U.S. government-led response brought far-reaching changes to national security, immigration, air travel, policing, and privacy, and for many millions of Muslims in the United States and other Western countries, life changed overnight.

That day also had a bearing on another important feature of 21st century society — the internet, and how information, good and bad, travels through it.

Back in 2001, just over half of Americans, and only 14% of those aged over 65, used the internet, and Facebook, Twitter and YouTube were all three to five years away from coming into existence.

However, Snopes.com had already been up and running for seven years, mostly addressing claims about Coca-Cola, Disney, and Hollywood, and debunking stray pseudoscience, with the occasional foray into political misinformation.  After Sep. 11, 2001, that changed.

To read through the archives of this website, before and after 9/11, is to observe the evolution of misinformation on the modern internet — from decades-old urban legends, shared at slow pace on chain emails, through to deadly serious 9/11 conspiracy theories posted on early internet chat rooms, right up to the present day, where hundreds of millions of social media users share multimedia misinformation, almost all of it political and hyper-partisan, or racially or culturally inflammatory, at lightning speed, and to a potentially global audience, largely from handheld mobile phones.

The Search for Answers After 9/11 U.S. government workers mill around near the White House and the Old Executive Office building 11 September, 2001, in Washington, DC. (Photo by -/AFP via Getty Images)

Within hours of the attacks on the World Trade Center and the Pentagon, and the heroic actions of passengers on United Airlines Flight 93, some shocked and fearful Americans, searching desperately for meaning in the events of that day, began emailing each other bogus claims that the 16th-century French astrologist Nostradamus had predicted it all. By the next morning, Snopes had debunked those claims, and from there, the site was inundated.

In the immediate aftermath of 9/11, Co-Founder David Mikkelson had to shut down the Snopes message board during daylight hours in order to prevent the server — which was shared with the main website — from crashing. Eventually, he was forced to set up a second server to deal with an unprecedented volume of site visitors and reader inquiries.

Whereas before, readers submitted their questions with a sense of curiosity and even leisurely inquiry, 9/11 instantly raised the stakes. Now, with millions of Americans gripped by profound and visceral fear and uncertainty — who exactly was responsible for the attacks? was a second wave imminent? — Snopes readers sought to regain a sense of control and understanding, submitting questions about a boycott of Osama Bin Laden's purported business interests, and then, the 9/11 conspiracy theories, which first emerged within hours of the attacks, and persist two decades later.

Snopes addressed those questions in real time, in the days, weeks, months and years after the attacks. Some strayed into the realms of mysticism and numerology, such as the bogus Nostradamus "predictions," and the widely shared wingdings canard. Others were blatantly anti-semitic and anti-Israeli.

The most persistent and impactful, though, revolved around the mechanics of the attacks themselves, with false claims that a cruise missile, deployed by shadowy government insiders, had damaged the Pentagon, and that the Twin Towers had been brought down by a controlled explosion.

Claims about "false flag" operations predated 9/11 and the advent of the internet, as did suspicion of official U.S. government explanations of intriguing rumors and mysteries. And anti-semitic conspiracy theories are arguably the oldest, most persistent form of propaganda in existence.

9/11 Conspiracy Theories and Growth of the Modern Internet Advances in technology and the emergence of online social networks have fueled the "9/11 truth movement" in a way that simply would not have been possible had the attacks taken place a decade earlier.

Consider, for example, "Loose Change"  — a 2005 film made by three 20-something friends in upstate New York. With a reported budget of just a few thousand dollars, and using a personal laptop computer, the filmmakers were able to create an early internet sensation and promulgate false and misleading 9/11 conspiracy theories to an audience of millions.

On Sept. 10, 2001, only 7 percent of American households were equipped with broadband internet. By 2006, that had increased to nearly half — an explosive growth in the number of Americans who had internet speeds that would allow them to stream an 80-minute video such as "Loose Change."

In October 2007, architect Richard Gage was presenting his 9/11 conspiracy theories in person at Pancho's Mexican restaurant in Pittsfield, Massachusetts. In 2009, his group — Architects and Engineers for 9/11 Truth — set up their Facebook page, and by September 2021, they had amassed half a million followers.

In June 2006, conspiracy theorist and talk radio host Alex Jones organized a "9/11 and the NeoCon Agenda" convention in Los Angeles, telling a news conference that "the evidence is overwhelming that 9/11 was an inside job." The two-day convention had a healthy turnout — an estimated 1,200 people. But those figures are dwarfed by the online following that Jones cultivated over the ensuing decade.

In 2017, Jones' Infowars website had around 10 million monthly visitors. By the time major tech companies de-platformed him in 2018, after he had spent years spreading inflammatory and defamatory conspiracy theories, Jones had amassed 2.5 million YouTube subscribers, more than 1.5 million followers on Facebook, and nearly a million on Twitter.

The rise of Jones in the two decades after Sept. 11, 2001, illustrates another important feature of that period — how 9/11 skepticism metastasized into other virulent strains of conspiracy theories, and how the growth of the internet played a key role in facilitating that expansion. Supporters of U.S. President Donald Trump fly a U.S. flag with a symbol from the group QAnon as they gather outside the U.S. Capitol January 06, 2021 in Washington, DC. (Photo by Win McNamee/Getty Images)

Not all conspiracy theorists believe every conspiracy theory presented to them, but clearly, those theories have crossover appeal. After all, if you are willing to believe elements within the U.S. government conspired in secret to plan the deadliest ever terrorist attack on American soil, slaughtering thousands of their own citizens, despite libraries of evidence to the contrary, why shouldn't your mind also be open to the possibility that the same government is planning to use (or create) natural disasters or epidemics in order to imprison millions of Americans in internment camps?

From there, it's not a giant leap to imagine that governments would covertly implant microchips in their own citizens, under the guise of a vaccine, and so on, and so forth.

Back in the 2000s, listeners to Jones' radio show might have tuned in to hear him speak about 9/11, but they would also have been exposed to his claims about the New World Order. In the 2010s, suspicious viewers might have watched Infowars for Jones' rants about the Sandy Hook school shooting, which he claimed was a "false flag" operation designed to encourage stricter gun control laws. But they might well also have heard him and his guests assert, in earnest, that then-President Barack Obama was stockpiling half a million disposable coffins for some nefarious, genocidal purpose.

During the 2016 presidential election, anyone who watched Jones outline, in extraordinary detail, his claims that both Obama and Democratic presidential nominee Hillary Clinton were literally demons from hell, could hardly have been surprised to encounter the Pizzagate conspiracy theory, which held that leading Democrats were part of a shadowy pedophile ring operating out of a pizza restaurant in Washington, D.C.

Jones, perhaps more than any other figure, illustrates the ways in which conspiracy theories feed into and overlap with one another, and have multiple points of entry. Technology companies and social media platforms have provided a powerful boost to that metastasis, in recent years, by using algorithms to suggest "related" content to readers and viewers — encouraging unceasing consumption of linked conspiracy theories and falsehoods, thus sending millions of people "down the rabbithole" of online radicalization.

His body of work also demonstrates how 9/11 conspiracy theories, which flourished in the early modern internet, set a blueprint for their successors: distrust of official accounts; assertions of harmful government intentions; and claims of staged or "false flag" atrocities.

The response to 9/11 has also been echoed in other ways — claims that Nostradamus predicted everything from the Notre Dame Cathedral fire of 2019 to the COVID-19 pandemic, and the persistence of numerology in the desperate search for meaning in the aftermath of unimaginable horrors.

It's significant that Donald Trump first endeared himself to many on the American right in 2011, when he became a leading and vocal proponent of yet another hyper-partisan conspiracy theory, "birtherism" — the debunked claim that Obama was born outside the United States.

During the 2016 election campaign, then-Republican candidate Trump granted an interview to Jones and Infowars, and appears to have been significantly influenced by some of the conspiracy theorist's pronouncements and political views.

Four years later, and facing an uphill battle to defeat Democratic candidate Joe Biden, Trump refused to denounce or distance himself from QAnon — a now infamous cluster of conspiracy theories whose proponents constituted a non-trivial cohort of Trump's base, and believed he was on a secret mission to protect the United States from a cabal of Satanic, child-sacrificing pedophiles led by prominent Democrats. Notably, QAnon had stemmed in part from Pizzagate, the 2016 conspiracy theory pushed by Jones and others.

In October 2020, Trump, the sitting president of the United States, promoted to his 87 million Twitter followers a bizarre conspiracy theory that claimed the operation that killed Bin Laden, mastermind of the attacks of 2001, had been a hoax. The journey from the "9/11 truth" movement to the age of QAnon had come full circle, two decades on.

The complete Snopes archive of 9/11-related articles and fact checks, dating to Sept. 12, 2001, can be found here.