The same TikTok user who posted the viral video later said that no one was hurt in the incident. 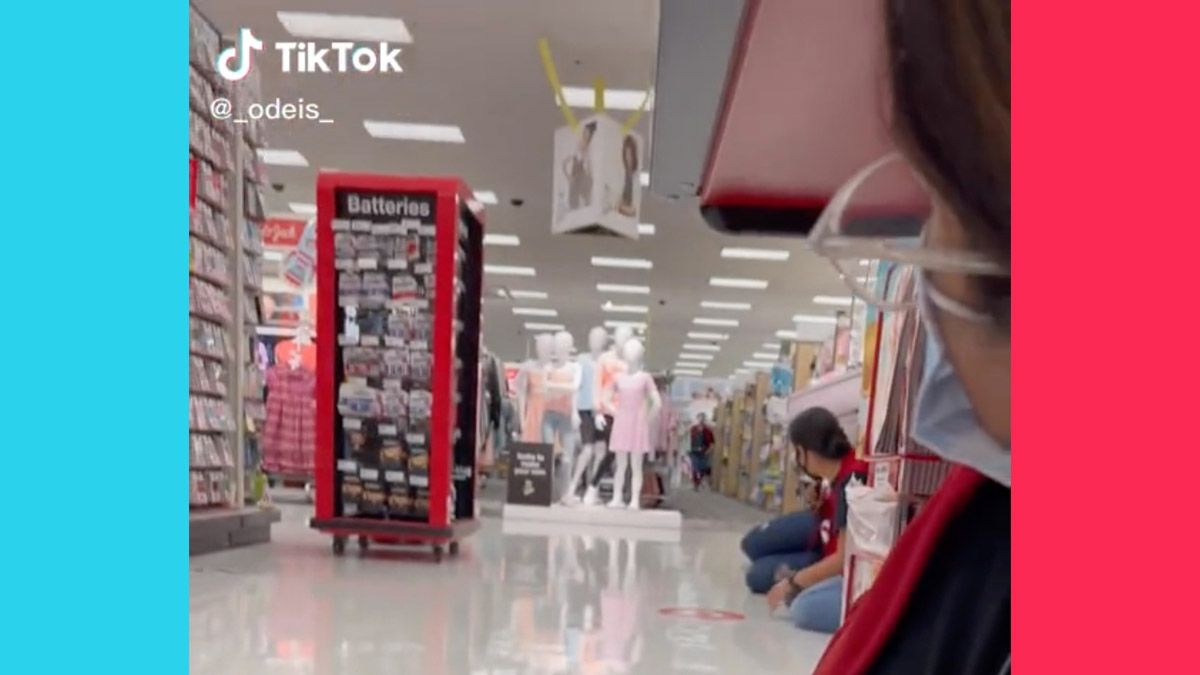 A new TikTok video has gone viral that shows employees in a Chicago Target store running for cover in fear of a possible mass shooting.

The video was more than 7 million times in the first 13 hours of being available on TikTok. "They're shooting up front," said TikTok user @_odeis_.

According to a video posted later by the same user, it did not end up being a mass shooting. An unknown number of suspects apparently fled the Chicago Target store before police arrived.

'He Was Getting Jumped'

The TikTok user and Target employee, who entered a door code to usher employees inside, later posted a full video explaining what happened. The video also addressed questions from comments.

TikTok user @_odeis_ said of the incident at the Target store: "I'm gonna try to make this quick, but, this happened in Chicago. This did not happen in Pennsylvania. Let me clear that up."

To summarize the video, the user claimed that another employee claimed to see a gun and told everyone: "There's a gun! There's a gun! Get down!." According to the clip, someone was being "jumped." The suspects fled the scene before law enforcement arrives. Another video was posted and then deleted by @_odeis_ that claimed police found no evidence a gun was involved.

We reached out to both the Chicago Police Department and Target Corporate. While local law enforcement did not have any information to provide, we did hear back from Target. A spokesperson for Target Corporate confirmed that three guests were involved in an altercation where an argument became physical. The concern over whether someone had a gun happened around the same time, but there was ultimately no evidence that a gun was involved. We were able to confirm that no one was hurt in the incident. The incident did occur in a Chicago Target store. However, the specific store was not disclosed.

Transcript of the Explanation

We transcribed the TikTok video of the Chicago Target employee explaining what happened. It is available below in full.

I was up front. I was going up front ten minutes before close and we had to get a drink, pay for it, and leave.

So, I didn't know how to react. We were all the way... people in my comments saying like "why are you out in the open?," I was all the way by the 10th register. It's a pretty far length from the front door. And me and my friend are obviously to the right of me. She was asking if I can get into that door. I was saying: "No, it's locked. It's the cash office."

And then, you can see where I jumped a little in the video. It was because I seen some guy. When I looked up there was a guy at the window getting thrown. The guy gets thrown to the floor. He was getting jumped. And that's when they pulled out the guns, but nobody got shot. Let me clear that up. Nobody got shot.

After I saw a guy getting thrown, I got up a little to see if I was in the clear. Usually in my head I'm like if that should ever happen, I'm out that bitch. But like, I was gonna to be out that bitch, but I couldn't leave my friends behind me. That's bogus.

And so, there were maybe like 15 people behind me. Girl I did. I ran, sprinted, opened that door, put that code in, I don't know how I remembered it. But I put that code in. I go everybody in and then we called the cops. We just called them again.

They got there in 8 minutes. The people got away. Slow ass cops. We were in the shopping area, so usually there's cops around just driving around but just not that day, even though there was a shooting like 2 hours prior in the place next to us.

I don't know, but nobody got shot. No one got hurt. We're all good. It was just a scary ass experience.

Another thing. People, when this shit was going on and I recorded, people were already on the phone with the cops, so don't make it seem like I was not calling the cops. There's about 100 people in that store. I'm pretty sure one person called the cops already.

This story will be updated should any further information about the Chicago Target TikTok video comes to light.

This story was updated to add details from a Target Corporate spokesperson.