The proposal video, edited like a "Star Wars" movie trailer, was followed up by a second clip that showed how the man's now-fiancée reacted. 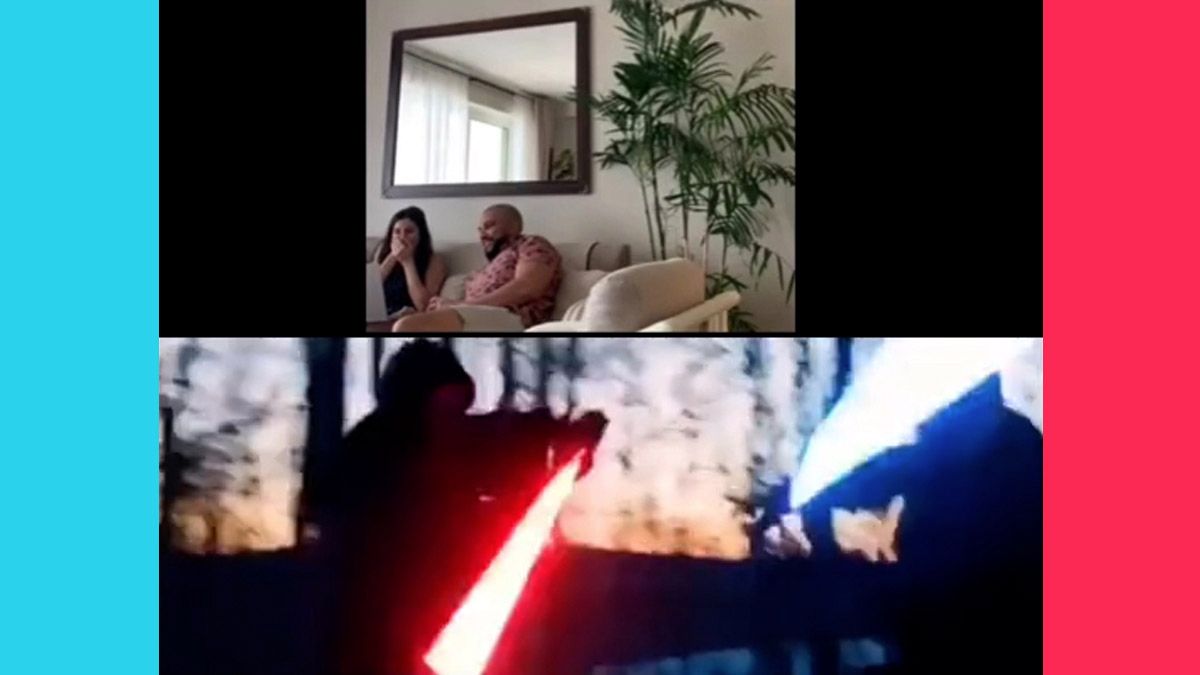 On July 6, 2021, a TikTok video showed an adventurous, family-filled, and loving "Star Wars proposal story" that was edited like a movie trailer. It was titled: "Star Wars: Union of the Jedi." The marriage proposal clip ended with the words: "Will You Marry Me?" It was viewed nearly 10 million times in 24 hours.

It originally was posted to Twitter on May 4 by Korey Lewis, the man who proposed to his girlfriend, Gray McKinley. "How do people do this," Lewis asked in his bio, referring to how to get a video to go viral. The trailer was created by Stephen Fiore, director and editor at The Union Productions, which has a YouTube channel. The cinematographer was Kristina Delp, while Lewis wrote the script and provided voice-over work.

We noticed that for two months the Twitter video received less than 10 views and no engagement. It was posted on May 4 because that day is known as Star Wars Day, chosen for the slogan: "May the 4th Be With You."

According to tweets that received no responses, Lewis was unable to get the attention of Mark Hamill, Jon Favreau, Jimmy Fallon, BuzzFeed, NowThis, Daily Mail, and others. Snopes.com is first to report about the video.

The "Star Wars" video was captioned with: "When he goes ALL out for the proposal and makes a legit movie trailer that you think is real until you see your family." The caption was typed by McKinley, also known as TikTok user @graymckinley.

At the beginning of the video, a voice-over from Lewis speaks as a hooded figure walks through a snowy region.

The voice says: "If you're waiting for the moment when you know for sure, it isn't coming. It's an instinct. A feeling. The force has brought you both together. And now it's time. Your destiny is within reach. The only question is will you accept it?"

The person walking through the snow in the "Star Wars" proposal trailer is revealed to be Lewis. McKinley's father then says: "This is your path. Your journey." This is followed by McKinley's sister looking out from what may be the planet of Coruscant.

Lewis' best friend remarks: "Don't worry kid. I've got the fastest ship in the galaxy." A woman in a hologram, identified as McKinley's mom, advises: "This is just the beginning."

"Red Four, standing by," says another of Lewis' friends. "I've got your six, Korey." The creative "Star Wars" proposal video trailer ends with a message: "Stretch out with your feelings, Gray...," which appeared in a similar font and color as the fabled "Star Wars" text, "A long time ago in a galaxy far, far away...."

At the end, the words "Will you marry me?" appear in the golden "Star Wars" font and color.

McKinley's reaction to watching the video was recorded by what appeared to be a hidden camera. "All right I caved," McKinley wrote. "Here's the reaction video as he plays me the fake trailer."

After the video ended, Lewis got down on one knee and asked McKinley to marry him. She said yes.

We reached out to the couple to learn more about the creative "Star Wars" movie trailer marriage proposal and their love of the film franchise.

In an email, Lewis told us that their favorite "Star Wars" film is probably "Return of the Jedi." He said: "My love of 'Star Wars' started with my dad taking me to the rerelease of the original trilogy in the 90s. Gray has always enjoyed 'Star Wars' movies but got really into it when we started dating 5 years ago. It's since become something we both get excited to experience together now."

A TikTok commenter asked about the cost of the video. Lewis answered: "I'm lucky my best friend (the Sith [in the video]) has his own production company," Lewis said. "Otherwise, no chance I could have afforded this."

"The snow scenes were shot in Cromwell, Connecticut behind a new condo development that was going up [...] in early February. Then we shot the rest using a projector and backlighting a makeshift screen with different locations like the cantina and inside the X-wing."

Lewis said that when he ran off to shoot scenes, the excuse he told McKinley was that he was headed to learn how to play 'Warhammer' at his friend Steve's place. "She never suspected a thing," he said. As for family, McKinley's mom showed up as a hologram for a reason. "The hardest part was figuring out how to incorporate Gray's mom who lives in France, but I love how the hologram concept came out."

After two months of planning, production, and post-production, the video was finished.

They first posted the video to Instagram, Facebook, and Twitter, where it received "minimal engagement except with friends and family." As for TikTok, he said: "Fast forward to yesterday. Gray mentioned that the new three-minute feature on TikTok would let us post the whole video and I guess the rest is history."

For the proposal, here's how Lewis described the moment:

We were actually in St. Maarten and had been in the Airbnb less than an hour when I sat her down to watch. I had a plan of syncing it up on the TV but ended up having some technical difficulties which made my nervousness go way up.

Every moment from when we got off the plane I was convinced she knew I was going to propose, so by the time I had to switch to the backup plan of showing her the video on our laptop my heart was racing. I told her a week earlier a new Star Wars trailer would be coming out soon for a new series so when I told her that it actually just landed, she wasn’t suspicious.

My biggest fear was that I would accidentally give it away or the video would freeze or something to that effect, so once I made it through to the end and saw that she was laughing/crying I couldn’t have been happier.

We also asked Lewis about what it has been like to see the video viewed more than 10 million times in one day. "It’s been really unbelievable and overwhelming to see how many people really enjoyed this video and were touched by it," he said. "I made this because Gray is excellent at figuring out how to give thoughtful gifts and I wanted to make sure that she had something special she could look back on forever. The fact that so many different people are actually sharing in that and having fun with it is an awesome bonus."

As for the upcoming wedding, he said: "We're considering having a 'sequel' that might play at our actual wedding, but I have to write a script first."

This story has been updated with an interview with Korey Lewis.