At the heart of the conspiracy theory: Multiple brick-and-mortar Mattress Firm stores were sometimes situated in close proximity. 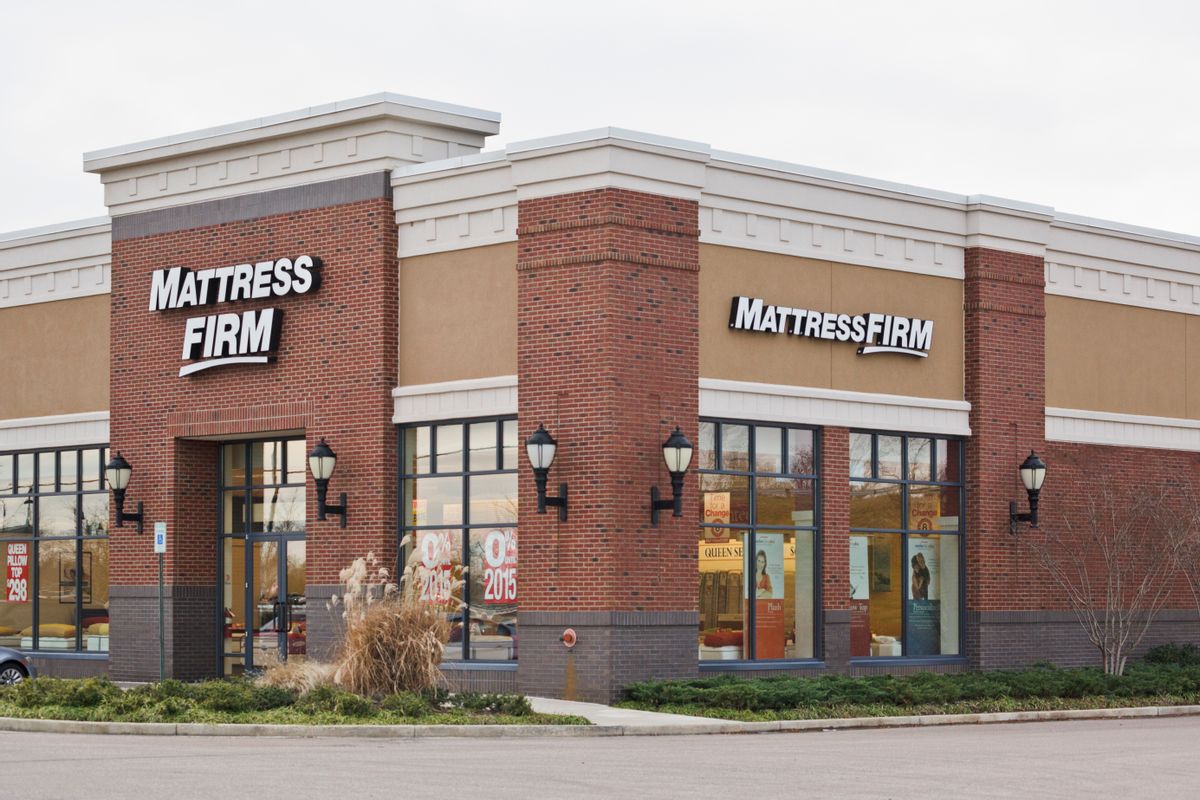 Mattress Firm at The Avenue shopping mall at Carriage Crossing in Collierville, Tenn. (Photo by James Leynse/Corbis via Getty Images)

On May 25, 2021, a meme was reposted in a TikTok video that claimed "Mattress Firm is a money-laundering scheme."

Conspiracy theorists have alleged the notion for years. The idea that the company was purportedly involved in criminal activity mainly revolved around one thing: In many cities, the company sometimes has multiple stores near each other. Courtesy: The Times of Northwest Indiana/Newspapers.com (2015)

In the course of our research, we found past reporting that indicated the conspiracy theorists might have confused money laundering with other actual pressing matters from 2009, 2017, and 2018. The most recent scheme purportedly involved bribery, kickbacks, and fraud at the company.

This story will first concentrate on those three matters, then explore some of the specifics of the conspiracy theory that were presented in the meme.

The oldest scheme we could find involved a Mattress Firm executive and $36 million. Forbes reported that Gary D. White, a former in-house vice president, was sued by the company in 2009 for activity that occurred between 2004 and 2008. White died in 2016. The case did not involve money laundering.

In 2009, Mattress Firm sued its former in-house vice president of real estate, Gary D. White, along with a Texas-area developer and a flooring company. The retailer accused the trio of padding up to an extra dollar per SF for every new Mattress Firm store and remodel job from 2004 until 2008. The total contracts amounted to more than $36M during the course of the scheme, Mattress Firm alleged.

Mattress Firm dismissed its claims against the developer and flooring company in late 2009, according to documents. It was unclear if the parties settled. White himself later filed for bankruptcy in Texas. It was unclear as of press time if he settled with Mattress Firm.

The Mattress Firm money laundering conspiracy theory may have originated in a popular Reddit comment that was posted on Jan. 22, 2018.

The top-voted reply under the comment claimed: "Surprise! Mattress Firm is owned by Steinhoff, which is currently embroiled in a money laundering saga." However, this did not appear to be accurate.

In December 2017, Steinhoff International revealed "accounting irregularities," according to Fin24. However, the reporting mentioned nothing about the company's being "embroiled in a money laundering saga," as alleged by the Reddit comment reply. Rather, it was "accounting fraud," according to Reuters.

The "illusion of income used to hide losses" did not appear to indicate anything about money laundering. The point of money laundering is to funnel an abundance of currency through a safe intermediary to obscure the reality of where the funds originated. According to the reporting, Steinhoff had a lack of money, not an abundance of it. Further, the story made no mention of Mattress Firm.

The response to the Reddit comment reply was later edited: "EDIT: As others have pointed out, Steinhoff engaged in accounting fraud, not money laundering. My bad."

On Nov. 30, 2018, the St. Louis Post-Dispatch reported on a legal battle between Mattress Firm and former associates.

Included in the story were allegations that all reportedly stemmed from the idea that real estate brokers and property development companies paid Mattress Firm insiders bribes and kickbacks for artificially inflating rental rates on leases throughout the country.

Was it the breakneck growth alone that landed Mattress Firm Inc. in bankruptcy court? Or, as the company claims in a lawsuit filed last year, did a pair of greedy executives - taking advantage of the strategy to skim money off its real estate deals and enrich an outside accomplice - help it get there?

The company says in its suit it isn't entirely to blame: Two executives allegedly conspired with a real estate broker in a "bribery, kickback, and fraud scheme" to push the retailer into expensive locations - it declined to say how many - based on phony sales forecasts.

According to the suit, Bruce Levy, the former head of real estate, and Ryan Vinson, a former vice president, let the broker, Alexander Deitch, oversee deals in a half-dozen states and "front-run" some of them, tipping him off to the next outlet's location so he could secretly buy it himself while reaping millions in fees.

In return, Mattress Firm claims, Levy and Vinson got diamonds, a Roger Dubuis watch, European vacations, and stakes in other real estate deals. One Florida property allegedly came complete with a yacht.

The three men deny the allegations in court papers and say they're being scapegoated by Mattress Firm.

More of the story can be read in the article from the St. Louis Post-Dispatch. According to the Southeast Texas Record, the legal matters are ongoing.

We reached out to Mattress Firm for comment, but they declined, saying: "We are not able comment on specific details of this matter as litigation is still ongoing."

The Meme: Schererville and CEO Resignation

The newspaper also noted that three of the Schererville locations were not originally opened as Mattress Firm stores. Rather, they were from company acquisitions of Back to Bed and Bedding Experts. Only two of the five locations remained in 2021.

As for the CEO resignation mentioned in the meme, this appeared to refer to former Mattress Firm CEO Ken Murphy. The aforementioned conspiratorial Reddit comment was posted on Jan. 22, 2018.

On Jan. 24, this company tweet appeared to make light of the virality of the comment. On the same day, Murphy told Business Insider that the money-laundering allegations were "absolutely false."

We asked Mattress Firm about Murphy's resignation and the fact that the company later filed for bankruptcy. A spokesperson explained:

Mattress Firm declared bankruptcy in October 2018 in an effort to restructure its debt obligations, strengthen its balance sheet, and optimize store footprint. As part of the restructuring process, the company took the necessary steps to ensure we were well-positioned for the future, including optimizing our store fleet by closing 700 under-performing or duplicative locations.

In the months leading up to bankruptcy and since emergence, there have been several leadership changes to provide fresh perspective and deep expertise in key areas that will be the foundation for the company’s next phase of growth.

We reached out to Mattress Firm's corporate headquarters to ask why consumers might sometimes see two or more Mattress Firm brick-and-mortar buildings somewhat near each other. A Mattress Firm spokesperson provided a lengthy response:

We recognize that having stores in close proximity may seem unusual and it is true that sometimes it doesn’t make financial sense, at least at first glance. The explanation of "money laundering" has somehow developed and, amusingly, become a cultural folklore over time. However, that is absolutely not the reason why we have so many stores.

Here are the facts – in the early 2000s, Mattress Firm set a goal to become the first border-to-border, coast-to-coast specialty mattress retailer. To achieve that goal, the company intentionally grew very quickly over a span of nine years through acquisitions and organic growth. As part of the acquisition of several competitors, sometimes with multiple acquisitions in a single market, we inherited existing, long-term leases for store locations. Many of these inherited lease locations happened to be near our existing store base. Once the stores were rebranded with Mattress Firm, a shopping center with two different competing mattress stores took on a new look.

Since then, the company has been working diligently to rationalize our store fleet which is evidenced by the number of stores we’ve closed in recent years, but it’s an ongoing process. We use a proprietary system, applying very specific data analyses and forecasted financial viability to help us determine optimal store placement, while also respecting business relationships with our landlords and our obligations under long-term lease agreements.

We are committed to optimizing our footprint and ensuring we continue to provide our customers easy, convenient access to our products. Similar to coffee shops, fast food restaurants, and gas stations, our store placement is based on factors including population, income, and drive time. It’s critical for us to invest in real estate in highly trafficked intersections and shopping centers in key markets to maintain visibility, so, in actuality, sometimes it does make financial sense to have stores in close proximity.

As for Schererville, the company spokesperson said: "The two [remaining] locations in Indiana are in a shopping area that front an interstate and a highly traveled state route. This means they attract both local and regional customers. Depending on the consumer’s traffic pattern, one store may be more visible and convenient than the other."

We asked the company if it could provide any financial records of the stores mentioned in the meme. The response: The company "does not disclose financial information or performance data about individual stores," adding that "the company continues to see positive growth and profitability in 2021."

We asked Mattress Firm if any investigative body has ever approached the company in regard to allegations of money laundering. "Absolutely not," the spokesperson said.

"Along the way, someone decided that their theories on our business strategy were more exciting than the facts and shared their opinion on a community-based social media site. Despite swift refutation, the rumors have become a part of cultural folklore but have no correlation to the company’s legitimate business."

We reached out to the FBI field office in Houston, Texas, where the company is headquartered, in order to confirm whether Mattress Firm has ever been investigated for any purported criminal activities. A spokesperson answered: "Per DOJ policy, the FBI does not confirm or deny the existence of an investigation."