Live Blog: Happily Ever After and Epcot Forever Return to Disney

Happily Ever After and Epcot Forever fireworks shows returned to Disney World in Orlando after they were stopped for more than a year. 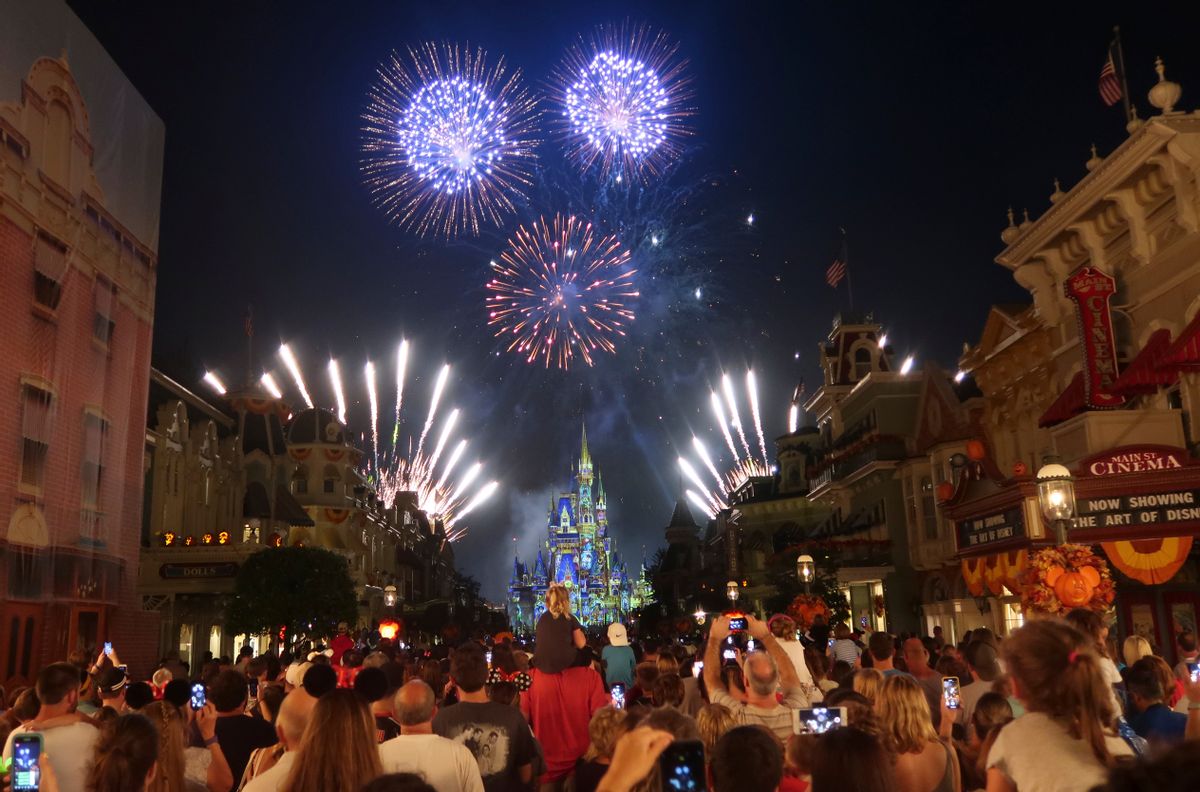 On July 1, 2021, the Happily Ever After fireworks show returned to the Magic Kingdom at Walt Disney World Resort near Orlando, Florida, and we covered it live. Shortly thereafter, Epcot Forever also returned to Epcot. The shows hadn't been displayed for park guests since early 2020.

Snopes.com has been covering the world of Disney since 1994. This occasion called for a live blog celebration.

Replay Happily Ever After (Ended)

Disney Parks was live on TikTok. However, they had technical difficulties at the beginning of the show. Replay Happily Ever After at this link from a YouTuber. If the feed is still live after the show, simply click or tap and go backward in time to where the fireworks began.

If this feed is still live, simply click or tap and go backward in time to where the fireworks began.

Read recent Disney-themed stories about the "Mr. One Way" ghost, a woman's proposal in front of Cinderella Castle, Pluto's reaction to a dance request, a purported "hack" to get a free T-shirt, Disney ducklings, a supposed "ghost" sighting at Disneyland's fireworks, a crazy moment in Disney's Animal Kingdom, and a question about Disney copyrighting and trademarking characters from Norse mythology.

Here's what happened on July 1 around TikTok, Twitter, Epcot, and the Magic Kingdom. All times were EDT.

10:22 p.m. EDT - This wraps up our live blog from the return of Happily Ever After and Epcot Forever at Disney World. Scroll down for past updates and read through all of our fact checks and other original reporting for Disney World and Disneyland. Thanks for joining in on the fun.

10:17 p.m. EDT - Here's a tweet regarding the absence of kites during Epcot Forever, although we did not indepdendently confirm this information.

10:14 p.m. EDT - Guests are leaving the Epcot Forever area, as seen in a tweet by @theahsokathanos:

9:52 p.m. EDT - Disney fans are gearing up for Epcot Forever, which begins in eight minutes.

9:43 p.m. EDT - In case you missed the finale of Happily Ever After, Twitter's @DisneyFoodBlog has you covered:

9:33 p.m. EDT - The show just ended. Park guests in the Magic Kingdom are tweeting and posting their videos. For example, @samantha_h89 posted this one:

9:32 p.m. EDT - It appeared that Tinkerbell did not make an appearance because of the rain.

9:13 p.m. EDT - Reminder: We will continue to post content from tonight's show, including reactions from park guests inside the Magic Kingdom, following tonight's fireworks. Come back after the show to follow it all. Also, Epcot Forever begins at 10:00 p.m. EDT.

9:11 p.m. EDT - Still waiting on that link to the Disney live stream. It's coming. Refresh to see the link appear in the next four minutes.

9:07 p.m. EDT - Disney Parks has not yet posted its link to the official live video stream. However, we will update this live blog as soon as it pops up. It should happen sometime over the next few minutes.

9:02 p.m. EDT - We're just a few minutes away from the return of Happily Ever After. Following the fireworks show and into tomorrow, we will be posting reaction videos from park guests. Be sure to return here tonight before you doze off to sleep, or tomorrow.

8:33 p.m. EDT - Mike Kepner on Twitter posted a photo in the rain, but said: "A little rain will not stop us from enjoying the ⁦@WaltDisneyWorld #MagicKingdom #happilyeverafter fireworks."

The tweet read: "A lot of people already gathering for the return of #HappilyEverAfter tonight at the #MagicKingdom."

7:42 p.m. EDT - The rain isn't stopping Disney guests from finding a spot to view tonight's fireworks. The video might not appear below. However, click on the tweet and it should open in Twitter or a web browser.

7:41 p.m. EDT - @ParkHoppersShow tweeted a picture of parkgoers finding their spot for the fireworks show.

7:17 p.m. EDT - It's possible that tonight's Happily Ever After fireworks show won't happen due to rain in the area. TikTok user @littlesophiebug posted a new video that showed parkgoers braving the downpour as they attempt to hold spots for the fireworks.

"Just Florida things, am I right," @littlesophiebug said. The fireworks are scheduled to begin at 9:15 p.m. EDT.

The video said: "Imagine how many people are already line up to watch Happily Ever After return at the Magic Kingdom, or are trying a Mickey pretzel for the first time and realizing it is the superior form of pretzel, or are choosing their kyber crystal at Savi's Workshop, or are singing along to 'It's a Small World' with their toddler, or are spraining their ankle in the tracks on Main Street, U.S.A."

4:13 p.m. EDT - TikTok user @thedisneykiki posted a video from Casey's Corner in Magic Kingdom. According to her bio, she indicated she'll be live for the Happily Ever After fireworks show tonight at 9:15 p.m. EDT.

3:32 p.m. EDT - All ready to go for tonight's fireworks show is TikTok user @allywoodstudios, who posted a video celebrating the return of Happily Ever After.

1:10 p.m. EDT - TikTok user @shannonkittner posted a video from Space Mountain ... where the lights were on.

The ride normally takes place in the dark. The ride has some "orbs of light" and special effects, but guests aren't supposed to be able to see much once it speeds up. The video was posted today but recorded a few days before.

12:32 p.m. EDT - TikTok user and travel vlogger @magicaltravelbyjen posted a view of Cinderella Castle from the top of Splash Mountain.

The castle is the home of the Happily Ever After fireworks show, which will begin at 9:15 p.m. EDT after not being publicly performed for well over a year. The video was recorded in the past but was reposted by @magicaltravelbyjen today.

12:22 p.m. EDT - Travel vlogger @lesleyetp arrived in Orlando to see Happily Ever After and to attend an Epcot dessert party.

10:56 a.m. EDT - Lynn Wolverton, aka @lynn_enchants_vacations, posted a tip for park guests visiting the Magic Kingdom who want to find a good spot to see the fireworks show, but also want to get a good view of Tinkerbell flying over the crowd.

She later posted a second video showing what it looks like to view Tinkerbell from that spot.

Disney World rehearsed the Happily Ever After show several times before July 1, as some readers may have seen in various TikTok videos. There was even a special cast member preview on June 29 at 10:30 p.m.

Jordan Fisher, who sings the song "Happily Ever After" with Angie Keilhauer, surprised the crowd in another video posted by the @disneyparks TikTok channel.

A Reddit post also showed the special tickets that read: "Magic Kingdom Cast. Homecoming Ever After." They also appeared in numerous TikTok videos.

On Disney World's official website, the Happily Ever After fireworks show is described like this: "Experience a truly grand finale to your day with the most spectacular fireworks show in Magic Kingdom history."

At the beginning of the show, the narrator says: "And they all lived happily ever after. Each of us has a dream, a heart’s desire. It calls to us. And when we’re brave enough to listen, and bold enough to pursue, that dream will lead us on a journey to discover who we’re meant to be. All we have to do is look inside our hearts and unlock the magic within."

The moment was recorded during the special cast member preview.

Disney reminds park guests that the show is subject to cancellation if there's inclement weather.

Go on a dazzling journey of color, light, and song that captures the heart, humor, and heroism of favorite Disney animated films. Watch in awe as Cinderella Castle becomes part of the story by magically transforming through amazing state-of-the art projection technology you have to see to believe.

Discover the magic of movies—and be inspired to find your own happily ever after.

Know Before You Go

Check the Entertainment Schedule, My Disney Experience app or the Times Guide at Magic Kingdom park for the schedule and showtimes.

This is an outdoor show and subject to cancellation in case of inclement weather. Showtimes are subject to change.