"That's probably Karen in a costume just to say it is illegal to ride there," a commenter posted. 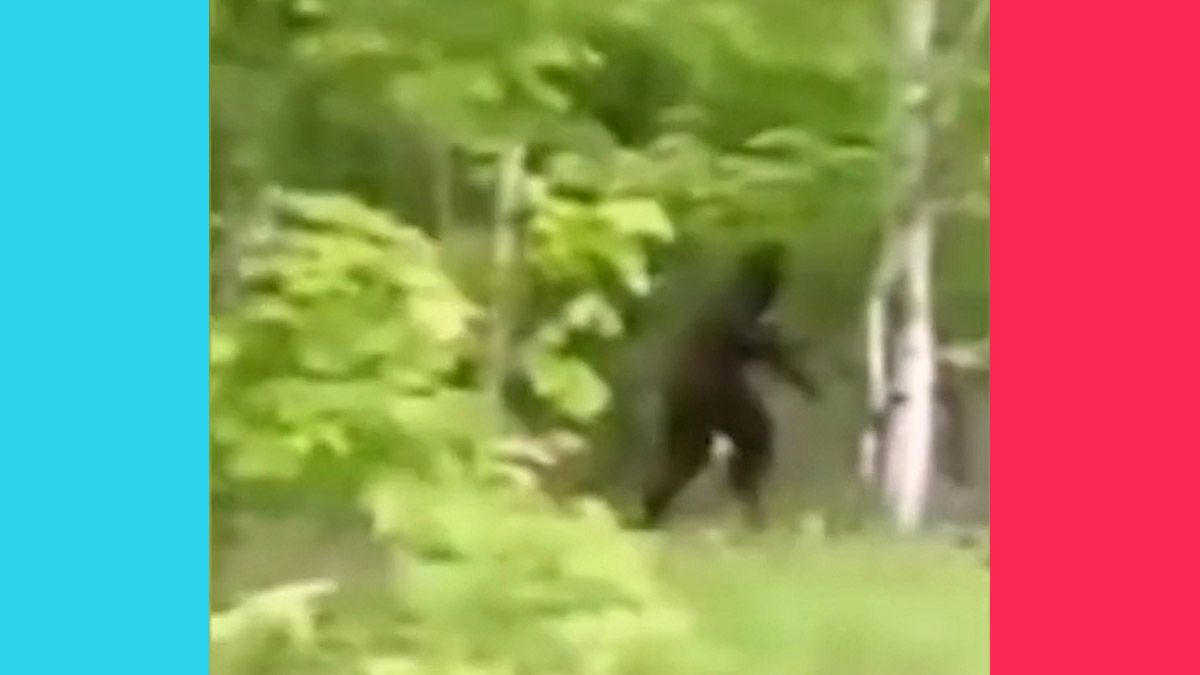 A viral video on TikTok claims to show Bigfoot chasing a man driving a vehicle through the woods. It carried the caption: "Bigfoot chases man on ATV!"

However, commenters were quick to point out several glaring issues with the purported sasquatch find. They also corrected the TikTok user's caption. "That's a UTV, not an ATV," one person said.

The video was posted on June 20. It was initially unclear if it was old or brand new.

In the video, two men appear to be riding in a UTV (utility terrain vehicle) through the woods. At the beginning of the clip, these words appear onscreen: "Notice the tree, trying to block the road?" However, commenters were quick to jump on this. Multiple people responded about the tree. One person said: "Notice the tree has clearly been down for a while because there was already a trail around it, genius."

This is true. There were clearly tire tracks already around the tree, and it had likely been that way for some time. As commenters noted, the downed tree appeared to have been there for quite a while. (@squatchmenow/TikTok)

As the men talked, a thing moving through the woods that was purported to be Bigfoot was seen chasing the UTV.

We were unable to determine a source or location for the video. One would think that if someone captured a heretofore mythical creature on video and it was real, they would be shouting the news from the mountaintops.

We expected at the very least to find an established presence somewhere on the internet, even on a conspiracy-laden website. However, we found nothing.

Countless comments claimed that the Bigfoot chase video had been "staged" and that it was "someone in a suit" or "costume."

We noticed several remarks about how short Bigfoot had apparently gotten over the years. "Why is Bigfoot 5'10?," one commenter asked. A sharpened and enhanced screenshot from the video clearly shows that Bigfoot enjoys a blurry lifestyle. (Courtesy: @squatchmenow/TikTok)

The fact that the person operating the camera during the chase happened to show Bigfoot at the perfect moment was also criticized. "That cameraman had perfect timing, didn't he," a commenter posted. Another user said: "Wow. I've never seen a Bigfoot motion-activated camera!"

We also found remarks about Bigfoot supposedly wearing white shoes. "Anyone notice how white the bottom of Bigfoot's shoes was," one person asked. "Bigfoot wearing white Nikes," another commenter posted.

While several commenters did claim to see white shoes, we looked at the video frame by frame and did not see white shoes. The white colors that matched up with where feet might be appeared to be bright spots on plants in the foreground.

Commenters also mostly joked about why Bigfoot might be chasing the man in the vehicle. For example, a commenter posted that "he's probably chasing them so that he can talk with them about their extended car warranty."

Another person had a different idea: "That's not Bigfoot. It's just Smokey the Bear headed to tell him only he can prevent wildfires and to put that cigarette out."

Some commenters had another joke: "He was like 'do you have time to talk about our Lord and Savior Jesus Christ don't you run away from me!'"

"People are funny," a TikTok user said. "All the technology but yet we can't find a 7-8ft creature, but we can find Saddam Hussein in a hole in the middle of nowhere."

In sum, the "Bigfoot chases man on ATV!" video, which actually showed a UTV, failed to convince many people that it's real. We will update this story should we receive further information regarding the source.