Dashcam footage showed that the woman's emergency flashers were on when a state trooper hit her car, causing it to flip. 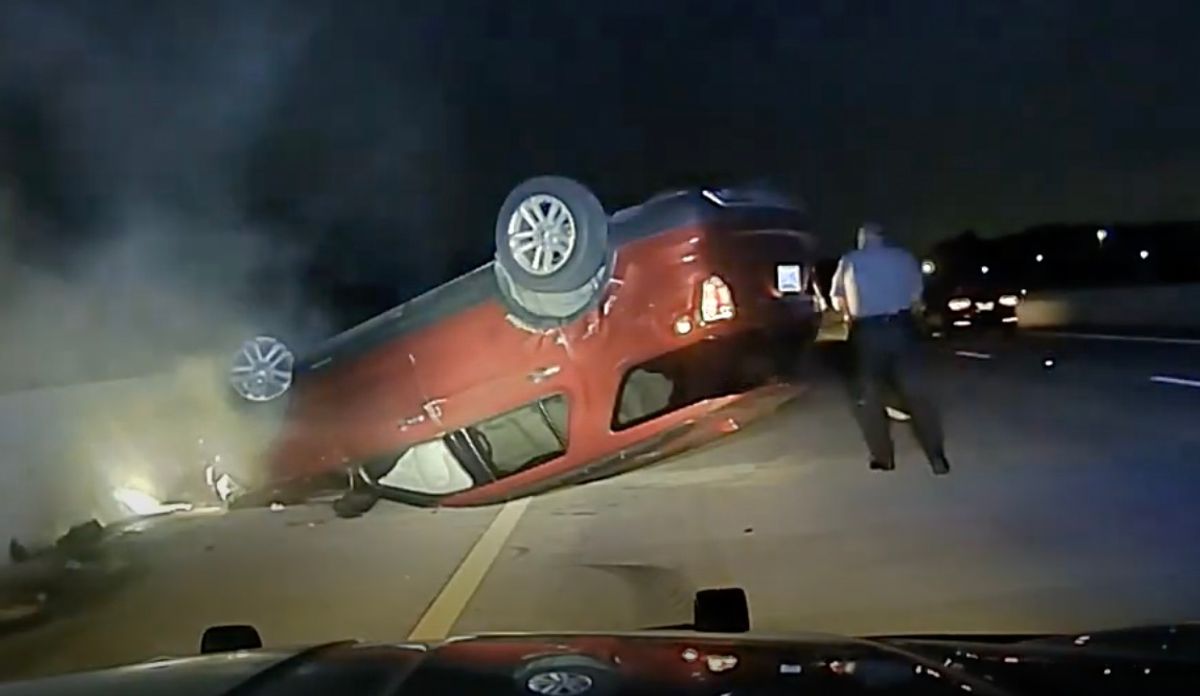 On the night of July 9, 2020, Nicole Harper was driving home, traveling southbound on U.S. Route 67 in Pulaski County, Arkansas, when an Arkansas state trooper allegedly clocked her going 14 mph over the 70 mph speed limit, according to court documents. The 38-year-old Harper was two months pregnant at the time.

Dashcam footage from the trooper's car shows that just minutes after attempting to pull Harper over, the officer, Cpl. Rodney Dunn, used what's called a PIT (precision immobilization technique) maneuver which flipped Harper's car, even though she had put her turn signal on, moved to the right lane, and turned on her emergency flashers.

The footage also shows that after the car flipped over, Dunn began arguing with Harper, who was dangling upside down from her seatbelt in her smoking vehicle.

Harper filed a lawsuit on May 18, 2021, seeking damages and accusing Dunn of negligence and excessive force. The police dashcam footage went viral in June 2021:

The video embedded in the tweet above cuts off before the aftermath of crash. Raw footage shows that Dunn approached Harper, who was hanging upside down in her flipped over vehicle with deployed airbags. Dunn began directing Harper to get out of the car, and also argued with her about why she didn't immediately stop. All the while, vehicles in neighboring lanes, and on the other side of the divider, can be seen whizzing by.

We removed Harper's husband's cell phone number from the video below, which was around the 6-minute 30-second mark. The video is otherwise raw footage made available by Harper's attorney:

"Because I didn't feel it was safe," Harper answered Dunn.

"Well, this is where you ended up," Dunn can be heard retorting. Harper's attorney, Andrew Norwood told Snopes that when Dunn said this, Harper was still hanging upside down.

A little later, Harper exclaims, "I'm pregnant!" Dunn then berates her for not pulling over immediately, to which Harper responds, "I had my flashers on." Dunn then states, "It doesn't matter ma'am."

The state of Arkansas' own Driver License Study Guide appears to indicate otherwise. Under the section from Arkansas State Police, "What to do when you are stopped by a law enforcement officer," drivers are instructed to "activate your turn signal or emergency flashers to indicate to the officer that you are seeking a safe place to stop" and "Pull to the nearest/safest spot out of the traffic lane."

At one point in the video, Harper stated, "I thought it would be safer to wait until the exit." Norwood pointed to signs on the highway that could be seen in the video, indicating that Harper and Dunn were about a mile from the next exit. He estimated it would have taken another 20 or 30 seconds of travel had Dunn not done the PIT maneuver.

The video footage shows that as soon as Dunn turned on his overhead lights, Harper put on her right turn indicator and then her emergency flashers. She also moved from the middle lane to the right lane. At the moment that Dunn struck Harper's car with his car, her right wheels were partially in the shoulder. According to the legal complaint filed by Harper's attorney, Harper also slowed down to 60 mph.

We reached out to Arkansas State Police with questions about the incident, to which Cpl. Liz Head replied that the department couldn't comment on the incident due to pending litigation. "Meanwhile, the Arkansas State Police continues to instruct and train state troopers in comprehensive emergency vehicle operation training which includes the approved procedures in the use of PIT," Head told Snopes in an email.

Harper told "Inside Edition" that she and her husband had difficulty conceiving, and at the time of the crash, she was pregnant after a decade of trying. Norwood told us by phone that Harper initially believed that the crash had killed her unborn child because the doctor in the emergency room was unable to find a fetal heartbeat.

"The troopers came to the ER to give her the ticket," Norwood said. "So she’s in the ER being told that her baby died and the troopers are there to give her a ticket for evading a police vehicle." Norwood also pointed out that a citation for going 14 mph over the speed limit is the lowest-level traffic infraction one can get in Arkansas. He also stated he will fight a charge leveled at Harper that she failed to yield to an emergency vehicle, stating, "She obviously wasn't fleeing." Harper's trial for charges related to the incident is scheduled for early November 2021.

Little Rock-based Fox affiliate KLRT-TV revealed that Arkansas State Police "attempted or used pits on at least 144 drivers last year. That’s almost double compared to the year before. In 2020 at least three people were killed during PITs, one was a passenger."

One goal of Harper's litigation, Norwood told us, is to "start a dialogue regarding the Arkansas State Police’s use of these types maneuvers and effectuate some type of change in the policy regarding these types of maneuvers moving forward."

We asked Head what the reason was for the surge in PIT maneuver uses and attempts, and will update if we receive a response.