What Is Critical Race Theory and Why Are Some People So Mad at It?

We talked to experts who have the answers. 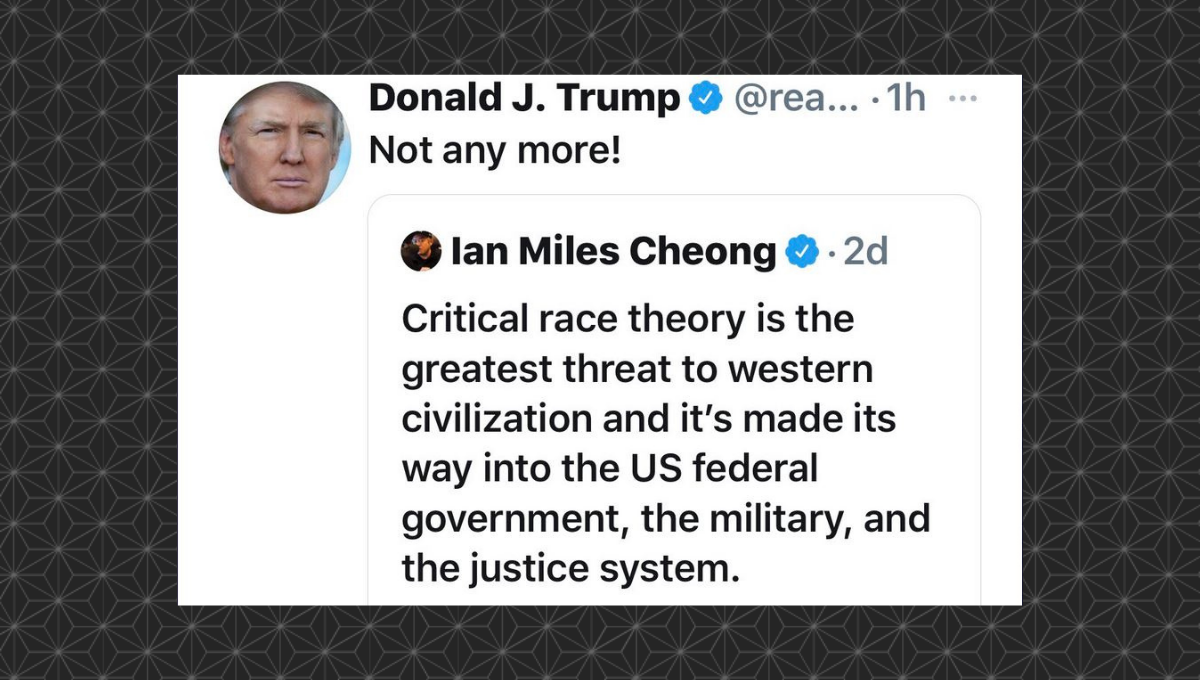 It's probably safe to say that most members of the public had never heard of critical race theory before the fall of 2020, when then-U.S. President Donald Trump launched a rhetorical war on it — or at least on what he thought it was.

As we reported at that time, Trump's executive order, "Executive Order on Combating Race and Sex Stereotyping," appeared to erroneously conflate workplace diversity training programs with critical race theory, a decades-old academic discipline that is primarily taught in law school. But his invectives against what is essentially a straw man have had political staying power amongst conservatives -- and even prompted new legislation in some states.

Critical race theory is often vaguely, but falsely, raised as an ominous, threatening ideology being taught to schoolchildren that teaches hatred of white people or the nation. For example, Republican U.S. Rep. Matt Gaetz of Florida tweeted that critical race theory "teaches us to hate our fellow Americans based on their identity," which is untrue: Georgia Gov. Brian Kemp, who is facing reelection in 2022, sent a letter on May 20, 2021, to the Georgia Board of Education pushing to end what he alleged to be the teaching of critical race theory in that state's K-12 schools.

When asked by the Atlanta Journal-Constitution to provide examples of critical race theory being taught to school children, Kemp's office instead said a new policy would preempt the possibility that it could be taught in Georgia and also referenced an Encyclopedia Britannica entry when prompted to explain what they thought critical race theory was.

Dozens of other states have introduced bills to try to ban critical race theory in schools or have already banned it, but these legislative efforts fundamentally mischaracterize what it is. For example, Tennessee's law bars teachers from instructing that "an individual, by virtue of the individual’s race or sex, is inherently privileged, racist, sexist, or oppressive, whether consciously or subconsciously."

University of California, Berkeley law professor Khiara Bridges called such takes on critical race theory a "dumbing down of a very intelligent, and yes, critical body of knowledge."

In a phone interview, Bridges told Snopes that the broad legal theory can't be pigeonholed as one static, bound topic.

“It’s not like a thing that you can pull from the shelf with a compendium of ideas and positions on issues like reparations or police violence,” she stated. “The way the scholarship is being talked about by all these folks proposing to ban it is a fundamental mischaracterization of what it is.”

Critical race theory doesn't, for example, argue that anyone is "inherently privileged, racist, sexist, or oppressive," as the Tennessee law states. In fact, critical race theorists generally acknowledge that race itself is socially constructed, and that even though there are no "inherent" attributes based on race, white people are statistically more likely to do better in society than similarly-situated people of color. Critical race theory interrogates why that is the case.

What Is Critical Race Theory, Really?

Critical race theory is a discipline developed by legal scholars decades ago, and it is primarily taught in law school. It looks to the law for answers as to why racial inequality persists even as American founding documents and aspirational ideals vaunt equality, and after the civil rights movement brought about landmark legislation aimed at ending racism de jure.

In her 2018 book, "Critical Race Theory: A Primer," Bridges noted that critical race theory emerged in the 1970s and '80s as a counterbalance to the prevailing thought at that time that "the law was not at all involved in creating and sustaining racial hierarchies."

Basically, Bridges explains, critical race theory scholarship considers race to be a social construct and racial inequality the norm in American society, not a deviation from the norm. Bridges wrote:

Prior to the advent of CRT [critical race theory], most in the legal academy had embraced the idea that norms of fairness, equality, and justice guided the law. Accordingly, they found it difficult to contemplate that the law could be involved in creating a society that, racially speaking, is unfair, unequal, and unjust. The intellectual forefather of CRT, Derrick Bell, was one of the first to challenge this view. Bell, the first black tenured professor at Harvard Law School, devoted his scholarship to exploring how it came to be that black people remained at the bottom of practically every measure of social well-being, even though the Civil Rights Movement had forced the passage of laws that ostensibly were designed to end black people's subordination. Bell concluded that racial inequality endured in a post civil rights era because, among other things, the vision of racial justice that civil rights lawyers had championed was a weak and impoverished one. The result was that the civil rights laws that had been passed, which reflected this vision, were equally weak and impoverished. Thus, Bell argued that if racial inequality persisted in a post-civil rights era, then the law was central to explaining that persistence.

Meaning, Crenshaw said, that critical race theory "takes seriously the idea that race is not a biological difference. There are not inherent differences in how people across races are constituted. Race is not real, it’s socially constructed."

And since there are no inherent differences in how human beings are constituted, Crenshaw said, then there must be another explanation for the material differences in the quality of life of people by race.

Critical race theory challenges the idea that racism exists only in silos like the Ku Klux Klan or individual acts of bigotry. Instead, the theory argues, racism is embedded in the system and enabled by the law. By interrogating how it lives on in the law, critical race theorists hope to help undo racism.

"In our society, the highest court in the land said Black people were so inferior they could never be citizens, and indigenous people could be removed from their own land," Crenshaw said. "These were two conditions of possibilities; the theft of labor and the theft of land, that were foundational to the American republic and they were embedded in our laws."

Crenshaw cited a recent example: Data revealed that Black, Latino, and Native American people were at a higher likelihood than white people of contracting, getting hospitalized with, and dying from COVID-19. (People of color were also largely shut out of the federal relief funds intended to keep small businesses afloat during the pandemic.)

Crenshaw also pointed to the fact that Black veterans of World War II were unable to access housing assistance provided by the GI Bill due to systemic racism. Generations later, she said, because of home value appreciation, the descendants of veterans face completely different situations relating to family wealth, all because of race.

In other examples of systemic inequality, Black and indigenous women are more likely to die from causes related to pregnancy. Non-white people have higher rates of all deadly encounters with police and mass incarceration. On average, they have less wealth than white people and are also more likely to be homeless.

Ellen Berrey, professor of sociology at the University of Toronto, told us that critical race theory helps understand these disparities because it can be generalized, meaning it can be applied across different systems to see what links them. She used the metaphor of blue-blocker sunglasses used for fishing, that filter out blue light so their wearers can more easily see fish.

"Where you point that lens, you should be able to see a set of dynamics more clearly and understand them better," Berrey told us by phone.

"Critical race theory is strongest at explaining how broader systems interact — how do racism and classism get embedded and institutionalized in the health care system, or the legal system, or the educational system, or whatever word you wart to put in front of 'system,'" Berrey added.

Understanding this dynamic means that there is hope for change, the experts we consulted told us.

"We are making policy decisions that are producing these racial inequalities, which means we can make different decisions that would rectify them, that’s the work of critical race theory," Bridges told Snopes in a phone interview. "What decisions should we be making to produce a more racially just country and world?"

Why Are Some People So Mad at Critical Race Theory?

Crenshaw told us that the recent prevalence of anti-critical-race-theory rhetoric among right-wing commentators, politicians, websites, and cable news shows is a backlash to the massive racial justice demonstrations that took place in the spring and summer of 2020, in response to the killing of George Floyd, a Black man who was murdered by Derek Chauvin, a white former Minneapolis police officer.

Crenshaw pointed out that it's otherwise bizarre that a body of legal scholarship that has been around for decades only recently became a target for some media and political figures, but those figures who have been vocal about it have presented it in a distorted way.

"It’s always a challenge when the table has been set by people who want to poison you," Crenshaw said. "The right-wing media has introduced critical race theory to the public and introduced it in a distorted way. So the majority of people who have heard of it, have heard of it as the greatest threat to Western civilization."

She pointed out that even though critical race theory is hardly new, it only became a prevalent talking point after millions of people of all races took to the streets calling for racial justice after Floyd's murder. She called the backlash the weaponizing of lies.

"If this was the threat to Western civilization that they claim it is, why is it that people haven't heard about it until the last couple months? Why can’t you point to a critical race theory course in a K-12 curriculum? I don’t know of a place that is teaching first graders case law."

Crenshaw called the attack on the scholarship a page out of a very old book.

"This is not about a particular theory. This is about whether we will continue to talk about racism in our schools," or whether we will have "the censoring of racial discourse for generations to come," Crenshaw said. "We’re not going to allow ideas to be canceled, and we're not going to shrink in the face of who we have been. To become the country we really need to be, we have to be strong enough to confront our history."

As for Trump's executive order banning diversity training, shortly after his inauguration, his successor U.S. President Joe Biden reversed it. He also signed his own order aimed at advancing racial equity.