Turning Photos Into Folklore: An Interview With Eduardo Valdés-Hevia

"It's about giving people a story ... something that they can imagine the world this image takes place in." 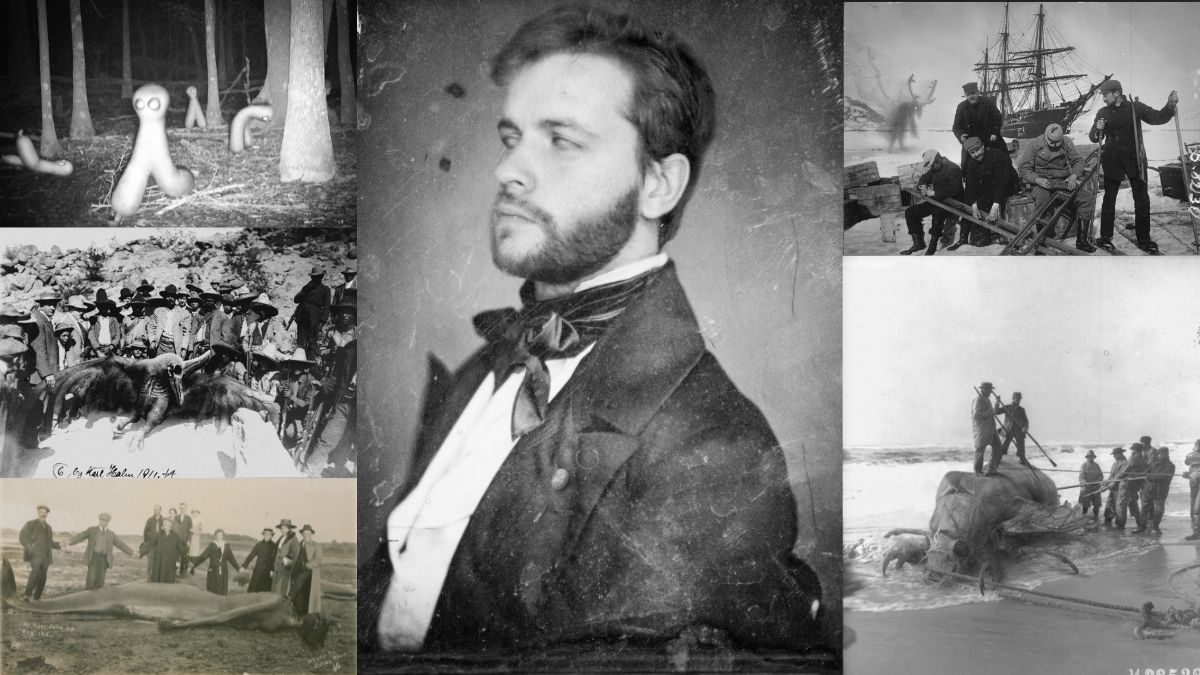 In May 2021, an image supposedly showing a mermaid that washed ashore along the River John in Nova Scotia in the early 1900s started to circulate on social media. When we first encountered it, we had two quick thoughts. First, that isn't real. Despite loads of mermaid "sightings" over the last few centuries, this mythical underwater creature remains decidedly in the myth category. And two, who created this modern piece of folklore?

That would be Eduardo Valdés-Hevia, a digital artist from Spain who creates "dark and surreal images through photomanipulation," according to his website.  We sat down with Valdés-Hevia to discuss what goes into creating these pieces of art, how to make a convincing piece of folklore, and how internet users can spot manipulated images.

Give The People a Story

The pages of Snopes.com are full of digital artwork that has been shared out of context. More often than not, however, when we trace these images back to their sources we find artists who, just like a novelist or a filmmaker, are using their medium to transport people into a fictional scene where they can believe, for a few moments, that the world is populated with mermaids, giant circus ants, and arctic monsters.

"It's about giving people a story," Valdés-Hevia said. "Giving them a fake context, something that they can imagine the world this image takes place in."

In addition to honed Photoshop skills (his editing software of choice), Valdés-Hevia creates these fictional worlds by giving the viewer a context in which to view them. One piece, for example, shows a large "Amazonian" ant in a circus cage. While this image is convincing in its own right, it's the accompanying circus poster and the fictional background information that sells this story.

1927. The Turner Bros. Circus begins touring the USA with an unusual exhibit. Their publicity claims it is an "Amazonian Mammoth Ant", though no such species has been described. For 2 years, they would tour the Midwest attracting the curious and skeptics.

Very little documentation remains apart from their posters and two photographs. The man who appears on the picture and poster is Henry Turner, one of the two founders of the circus. In later recollections from his brother Robert, he claimed Henry became obsessed with the ant:

"Towards the end he was even sleeping in the cage with it [...] One day he just took off with the ant. He left everything behind."

Henry would not be heard from again. The loss of his founder and the stock market crash of 1929 was too much for the circus, which closed that year.

Valdés-Hevia builds these stories from image to image, adding little pieces of fabricated context in order to draw the viewer deeper into the lore. When a mustachioed man appears in multiple images from this set, the viewer gets a sense that this person really existed and, if that's true, maybe he really had a mysterious giant ant.

"In the example of the ant I could just do a picture with the ant but I did a couple," Valdés-Hevia said. "Then I found an old poster which originally had a horse, a circus poster, so I removed the horse and drew the ant ... And then I saw that these images fit together. The guy in the poster with his little mustache was very similar to the guy in one of the pictures standing next to the ant. So I said, I can pull this string and make a little story about this one guy."

From Idea to Image

Valdés-Hevia, who occasionally streams himself creating these pieces on Twitch, told us that the mermaid piece probably took him about eight hours to create. He starts with a general idea (to make a mermaid picture) and then searches for images that could serve as the base for his digital artwork. In the case of the mermaid, he found an old photo of a group of people standing around a beached whale that could, with a few alterations, be made to look as if a mermaid had washed ashore.

"It can take anywhere from a couple hours to 10-20 hours ... I usually start with a general idea then I will scour every archive I can find for a base image. Then you find the pictures you want to add in. Just making it is probably the shortest part compared to coming up with the idea and thinking of the story."

An Escape From the Bubble

While these modern art pieces use modern tools, they are reminiscent of some famous fake photos from the 1900s in both form and function. A photographer named Frank D. “Pop” Conard, for example, made a series of postcards in the 1930s that supposedly showed the people of Kansas dealing with various giant grasshoppers. Conrad, like Valdés-Hevia, combined multiple images in order to make these fictional scenes, and also like Valdés-Hevia, his intent wasn't to deceive, but to entertain. It wasn't until these "funny untruths," as Conrad called them, were published in a newspaper in 1937 under the headline "Giant Grasshoppers Invade Butts Orchard East of City" that they transitioned from a piece of fiction to a hoax.

While Valdés-Hevia's mermaids have not been responsible for any incidents of mass hysteria, the digital artist has seen his art being shared out of context:

"What happens is there's some sort of escape velocity when a post gets really popular. Because it gets out of the bubble that I'm usually in on the internet, which is like horror artists and art in general. So when people see something like this they assume it's art and there's not a problem. In 99% of cases I don't get any comments about 'you're trying to trick us' or something. But at some point, if it gets too popular, people start seeing it out of context, they don't know I'm an artist, and people start taking it too seriously."

Valdés-Hevia told us another one of his favorite hoaxes that originated in a village in England in the early 1900s. Unlike the aforementioned mermaids, grasshoppers, and giant ants, the Cottingley Fairies weren't the work of photo editing, but arts and crafts.

"I really like the Cottingley Fairies. This was just two sisters, or two childhood friends, who went out with a camera and some paper cutouts of some fairies and took pictures of them. And they went back to their mother and were like 'oh we found fairies.' And the mother believed them and started spreading them and a lot of people believed these images. But you can see it, now, they are clearly paper cutouts. But at the time, photography was newish and you didn't have a history of people telling lies with photography. So a lot of people believed them." There is a strong connection between folklore and photography. There's no doubt that the legend of Bigfoot would not be as legendary if it weren't for the Patterson–Gimlin film, and we're skeptical that Nessie, the monster of Loch Ness, would be known around the globe if it weren't for the "Surgeon's photograph," a hoax image made with some clay and a toy boat as revenge on a newspaper in 1934.

"I think there's a great intersection between folklore and photography and other objective measures of capturing the world. You know, if you see a photo, you're seeing a reality, your brain assumes you're seeing a real thing. So when you see mothman, or bigfoot, or mermaids, it tickles our brain in a special way to have this mythological thing and seeing it in an objective way even though you know it could be easily manipulated."

Can You Really Tell by the Pixels?

If you've browsed the comments under any seemingly fake photograph, you will probably see someone claiming that you can tell the image is fake because of the pixels. While someone who creates these images may be able to determine that an image is fake by solely looking at the visuals, this isn't as easy as it seems. In fact, Valdés-Hevia said that the best way to tell if a picture is fake is to take a look at the context around the image.

We asked Valdés-Hevia, as he spends ample time creating the sort of images that Snopes continuously has to examine, if he had any tips on spotting manipulated images. He walked us through his mermaid image to point out a few of the flaws that could give away it's authenticity — the edge on the mermaid's shoulder is too crisp, he said — but added that a really well-done digital edit is going to be hard to spot with the naked eye.

Instead of looking for errors in the image itself, internet users are probably better off examining the information around the image. Who made it? Where was it first posted? What's the context? Is the source credible? Is the image believable?

The first thing, even if you don't know Photoshop, look at the context ... The simpler explanation is usually going to be the true one. Is it easier for someone to make a fake image of a mermaid, or for mermaids to exist and you just found out about it.

Valdés-Hevia said that he uses Google Image Search and Tineye in order to trace back images to their original sources. Both of these tools have web extensions, which means that you can use them by simply right-clicking on an image. While we can tell you right now that the following images are fake by looking at the context (it originated with an artist who has a penchant for making realistic monster photos), can you find the source image via a reverse-image search?

Did you find it? You can see the source for the base of this artwork here.

OK, this one is a little harder, so we'll give you a hint: Screenshot different parts of the image to make separate searches for the foreground and the background:

Did you find it? You can see the sources for this image here and here.

You can see more of Valdés-Hevia's work on Twitter, Instagram, or on his website. If you want to learn more about how these images are made you can see him create them on Twitch. In a nod to some of the great photographic fakes of the past, you can get a postcard featuring Valdés-Hevia's artwork via his Patreon.