Which States Ban Giving Food and Water to Voters at Polling Places?

Georgia's S.B. 202 caused widespread controversy in the spring of 2021 and prompted questions about election laws elsewhere in the United States. 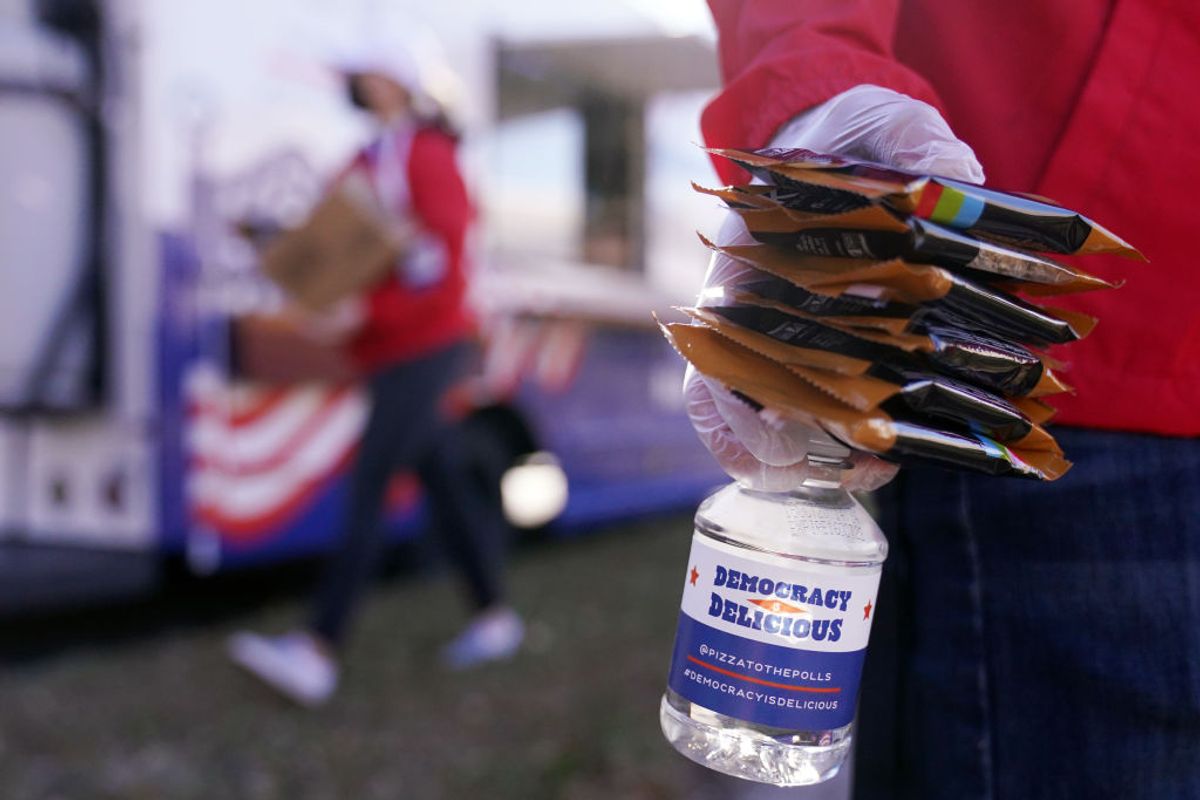 In March 2021, controversy surrounded Senate Bill 202, a bill in Georgia that would bar outside actors from giving food or water directly to voters waiting in line at polling places, but would allow poll workers and election judges to provide self-serve water to voters. We wrote about the law in greater detail previously.

The "food and water" provision prompted opposition from U.S. President Joe Biden, and an interesting retort from Gabriel Sterling, chief operations officer in the office of Georgia Secretary of State Brad Raffensberger.

Speaking on PBS Newshour, Sterling defended the legislation, claiming that Delaware — Biden's home state — had a similar law, and such rules were "pretty standard across the country":

Sterling's assessment prompted several inquiries from Snopes readers who were curious about what the laws said in various other states about providing food and water to voters standing in line at polling places. We decided to find out.

Snopes contacted election officials in all 50 states, along with the District of Columbia and U.S. territories including Puerto Rico, asking for details of any state laws or regulations governing the practice. Based on the responses we received, and a survey of state laws and regulations, the following is a breakdown of how providing food and refreshments to voters is regulated (or not) throughout the United States.

'Pretty Standard Across the Country'?

In reality, election laws such as S.B. 202 in Georgia, which explicitly prohibits members of the public from providing food and water directly to voters, are very rare. In fact, we found only two other states, Montana and New York, that impose even somewhat similar bans. Title 13, Chapter 35, Section 211(2) of the Montana Code states that:

Indeed, Montana's prohibition is actually less restrictive than Georgia's, because it applies only to candidates or individuals linked to them or their campaign, whereas Georgia's S.B. 202 states that:

"No person shall... give, offer to give, or participate in the giving of any money or gifts, including, but not limited to, food and drink, to an elector..." [Emphasis is added].

In New York state, it's prohibited to provide "meat, drink, tobacco, refreshment or provision" to a voter at a polling place, except if the retail value of what you give them is less that $1, and the person or entity providing it is not identified. So a kindhearted stranger wearing no identifying badges or clothing would very likely be legally permitted to hand out small bottles of water to voters waiting in line in New York, but the same activity is subject to a blanket ban in Georgia.

New Hampshire specifically prohibits providing "intoxicating liquor" to a voter, as a form of bribery, but stipulates that it must be given "with a view to influencing any election" in order to constitute a violation — a "quid pro quo" component not found in Georgia's legislation.

Similarly, North Dakota specifies that alcoholic beverages qualify as a "thing of pecuniary value" that must not be offered or given to a voter, but the law also contains a "quid pro quo" requirement, stipulating that the alcohol must not be given "as consideration for the recipient's voting or withholding his vote or voting for or against any candidate or issue."

In Kentucky, two laws bar candidates from offering any "money or other thing of value" in exchange for votes, and electioneering within 100 feet of a polling place. In 1997, the Kentucky Supreme Court ruled, in the case of Ellis v. Meeks, that a candidate who had greeted voters at a polling place and made free food available to everyone there had violated those prohibitions on electioneering and bribery. The court voided his election.

However, that ruling was based on rather specific circumstances, and it's unlikely that a nonpartisan non-candidate (that is, an ordinary member of the public) would also be found to have violated the law for similarly making free food or water available to voters at a polling place.

Sterling's claim that Delaware has a similar prohibition to Georgia's was also way off base. Like most states, Delaware has laws that prohibit electioneering — that is, erecting politically charged documents or placards, or engaging in politically charged speech, near polling places — and bribery. However, nothing in its election laws even mentions the distribution of food or water, so Sterling's claim that the food and water ban in S.B. 202 was "actually the law in the president's home state of Delaware" was simply false.

An overview of the laws in each state and territory can be found below, and further details are available to download here.

Aside from the handful of outliers examined above, election laws in the United States overwhelmingly do not even mention the provision of food, water, and refreshments to voters waiting in line, and Sterling's claim that prohibitions such as the one found in S.B. 202 were "pretty standard across the country" was far from accurate.

Typically, states have laws that prohibit bribery — offering money or some other thing of value in exchange for a voter's actions (or inaction) — and electioneering — displaying support for a particular candidate or ballot proposal within a designated area around a polling place.

In principle, a member of the public could fall afoul of such laws if, for example, they handed out water bottles with labels promoting a particular candidate, or if they offered food only to voters who intended to vote for that candidate. But in such examples, the provision of food and water would be entirely incidental to the offense of electioneering or bribery. By contrast, Georgia's new law prohibits distributing food and water regardless of whether the electioneering or bribery components are present.

Alongside each state and territory's regulations, federal law also contains a relevant prohibition: Title 18, Chapter 29, Section 597 of the U.S. Code states that:

Whoever makes or offers to make an expenditure to any person, either to vote or withhold his vote, or to vote for or against any candidate; and
Whoever solicits, accepts, or receives any such expenditure in consideration of his vote or the withholding of his vote—