How the Nazis Used Music to Celebrate and Facilitate Murder

Beautiful music accompanying murder and rape is a bizarre and disturbing juxtaposition. 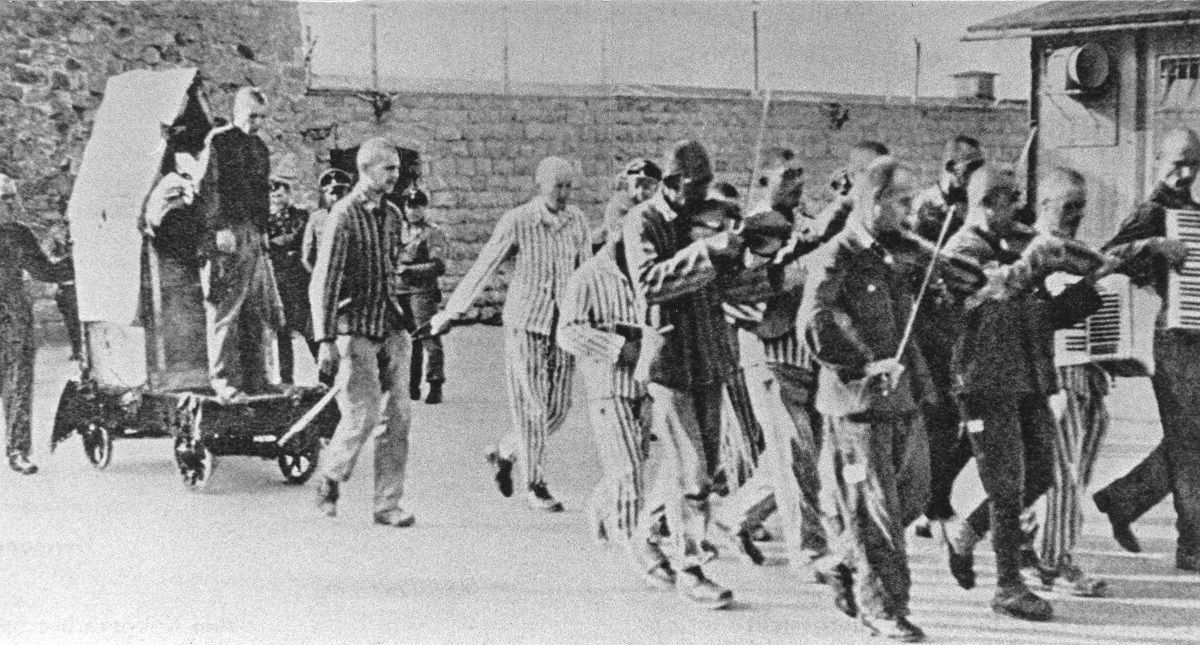 Beautiful music accompanying murder and rape is a bizarre and disturbing juxtaposition.

In December 1943, a 20-year-old named Ruth Elias arrived in a cattle car at the Auschwitz-Birkenau concentration camp. She was assigned to Block 6 in the family camp, a barracks that housed young women and the camp’s male orchestra, an ensemble of incarcerated violinists, clarinet players, accordion players and percussionists who played their instruments not just when the prisoners marched out for daily labor details, but also during prisoner floggings.

Performances could be impromptu, ordered at the whims of the SS, the paramilitary guard of the Nazi Party. In a postwar interview, Elias discussed how drunken SS troops would often burst into the barracks late at night.

First, they’d tell the orchestra to play as they drank and sang. Then they would pull young girls from their bunks to rape them. Pressed against the back of her top-level bunk to avoid detection, Elias heard the terrified screams of her fellow prisoners.

Before her tormentors engaged in these acts, she recalled, “The music had to play.”

Music is often thought of as inherently good, a view exemplified in the playwright Wilhelm Congreve’s oft-cited aphorism “music hath charms to soothe a savage breast.” It is also often seen as a form of art that ennobles those who play and listen to it. Its aesthetic qualities seem to transcend the mundane and horrific.

Yet it’s also been used to facilitate torture and punishment, a topic I think is worth exploring.

When I was researching my book “Drunk on Genocide: Alcohol and Mass Murder in Nazi Germany,” I was struck by the ways in which music accompanied deaths in the camps, the ghettos and the killing fields.

Beautiful music accompanying murder and rape is a bizarre and disturbing juxtaposition. But its use by the perpetrators to torture their victims and to celebrate their acts reveals not only the darker side of its use but also offers insights into the festive mindset of the killers as they participated in genocide.

The ‘joy’ of killing

Stories of the integration of music and song into acts of torture and killing can be found throughout the interviews and memoirs of survivors. As in Auschwitz, the SS detail at the Belzec killing center organized a prisoner orchestra for its entertainment. Every Sunday evening, members of the SS forced the ensemble to play for their enjoyment as they held a drunken party.

One of the SS troops amused himself by having the orchestra repeatedly play a melody while the other prisoners were forced to sing and dance, without respite.

Another Jewish survivor remembered listening to that same orchestra as it accompanied the cries of those being murdered in the camp’s gas chamber. 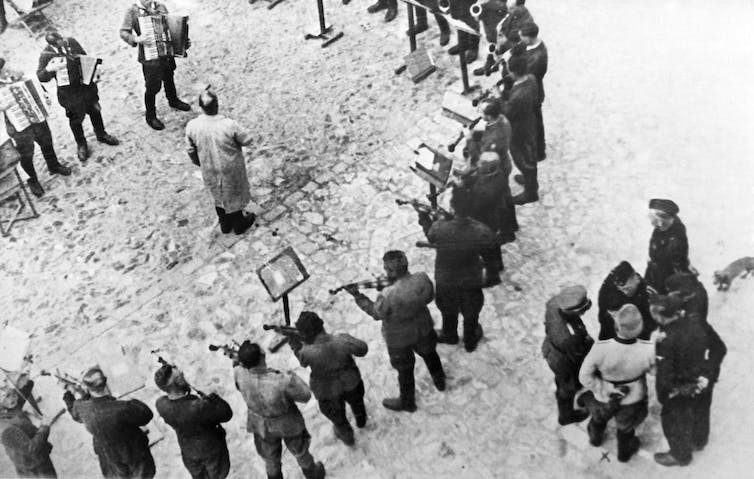 Prisoners play ‘The Tango of Death’ during the execution of Soviet citizens at the Janowska concentration camp in Ukraine.
AFP via Getty Images

In the absence of an orchestra, troops could nonetheless spontaneously break into song.

Genia Demianova, a Russian schoolteacher, was interrogated, tortured and gang raped in August 1941. After the initial assault, she wrote of hearing the clinking of glasses as her rapist toasted, “The wildcat is tamed!” Other German soldiers then took their turns with Genia, who lost count of the number of assailants. As she lay battered and bleeding on the floor, she heard the voices of her attackers crooning to “the sound of a sentimental [Robert] Schumann song.”

And SS Col. Walter Blume, a commander in the Einsatzgruppen, the notorious SS death squad, was known to gather his men after a day of murder for evening singalongs around a campfire.

The single largest massacre of prisoners in a concentration camp occurred on Nov. 3, 1943, at Majdanek.

During a postwar interrogation, one policeman recalled hearing a colleague at the time exclaim, “It’s really nice to shoot to military march music.”

Afterward, the troops returned to their quarters for a “wild party,” during which they swilled vodka and celebrated in uniforms covered in the victims’ blood.

In September 1941, a group of German policemen prepared to execute 400 Jewish men, women and children near the Ukrainian town of Cutnow. In postwar testimony, one of the policemen described the presence of a band as the Jews were marched to the grave site.

“It was loud,” he testified, “just like a carnival.”

I came across this often during my research – mass killings described as carnivals or evoking a “wedding atmosphere.” The recollections of these heinous acts as part of some sort of macabre celebration have appeared during other genocides, too.

After the Rwanda genocide, one Hutu perpetrator remarked that “the genocide was like a festival,” and he remembered celebrating a day of murder with beer and a barbecue with his fellow killers. A female Tutsi survivor described intoxicated perpetrators singing as they hunted for their victims and engaged in mass rapes.

The fusion of alcohol, music and song with mass murder shows how violence was normalized – even celebrated – by the Nazis.

Under the Nazi regime, music and song forged community, camaraderie and shared purpose. In unit bars, around campfires and at the killing sites, the addition of music was more than just a form of entertainment. It was also an instrument for promoting a common purpose and bringing people together. Through rituals of song, drink and dance, the Nazis’ actions could be collectivized and normalized – and their larger project of violence that much easier to pull off.

Ultimately, genocide is a societal endeavor; music and song – like political philosophies – are part of a society’s cultural artifacts.

So when mass murder becomes a central tenet of a society, perhaps it shouldn’t be a surprise that these atrocities are carried out against a backdrop of stirring song, a rousing military march or a sentimental Schumann melody.