James, ‘Brother’ of Jesus: His Ancient Remains Belong to Someone Else

A bone said to have belonged to Saint James has been radiocarbon-dated – and sadly de-authenticated. 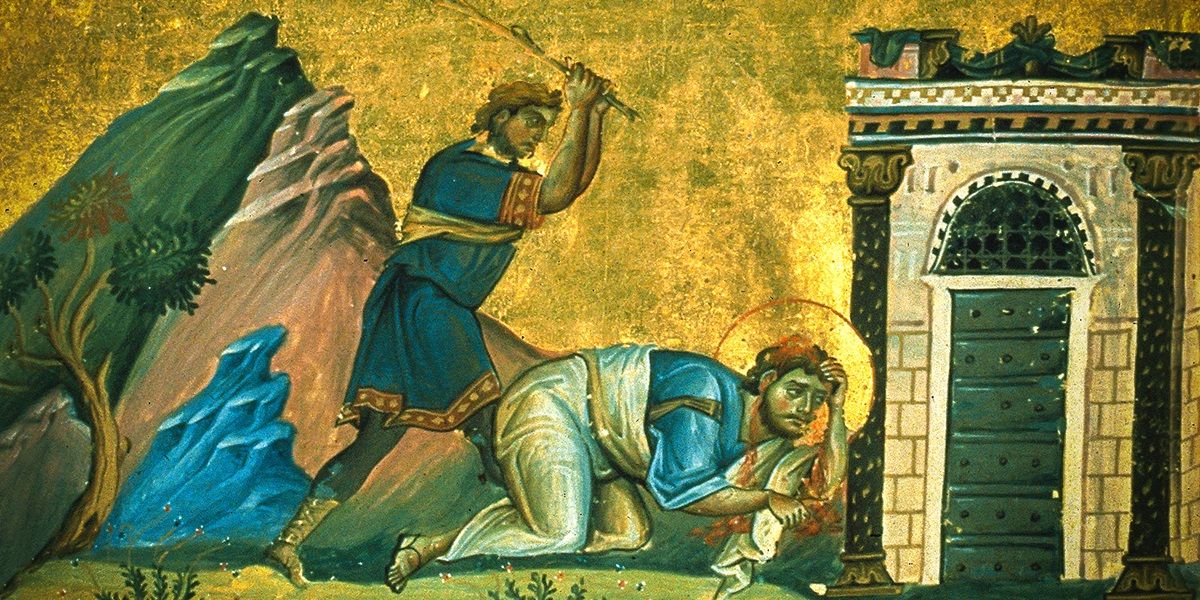 This article about Saint James is republished here with permission from The Conversation. This content is shared here because the topic may interest Snopes readers; it does not, however, represent the work of Snopes fact-checkers or editors.

Hunched innocuously in the shadow of Rome’s mighty Piazza Venezia, just a stone’s throw from one of the city’s busiest thoroughfares, the Santi Apostoli church might be forgiven for having more respect for the dead than for the living.

That’s because of the treasures that the church protects. As well as having briefly accommodated the tomb of Michelangelo, the church has, since the year 556, housed relics of particular significance to the Holy Catholic Church: the remains of two of Jesus’ contemporaries, Saint Philip and Saint James, the latter of whom is believed to have been Jesus’ brother.

Now, after careful extraction and analysis, a bone said to have belonged to Saint James has been radiocarbon-dated – and sadly de-authenticated. Despite being incredibly old, having died at some time between 214 and 340, the individual housed in the Santi Apostoli church for one and a half millennia turns out to have been a few generations off the real deal.

Yet the surprise finding that the wrong person’s remains were likely transported to Rome from the Middle East has prised open a fascinating history: of plundered tombs, holy men’s bones, and the remarkable relocation of saints from one ancient empire to another.

In ancient Rome, families commemorated the birthdays of their ancestors by taking festive meals at their graves. This custom was later taken up by early Christians, who came together around the tombs of their saints on their name days.

But there was a problem. As Christianity became more dominant, the tombs of saints became overcrowded. Plus, the tombs were often situated outside the city walls, which made the feasts potentially risky. In an effort to make them safer and more accessible, saints’ remains were exhumed and transferred into churches in a process called translation. 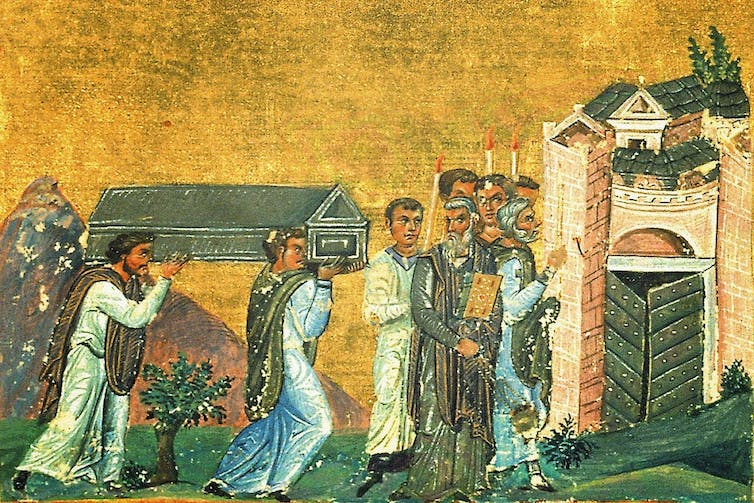 The translation of saints’ remains into churches became increasingly common in the fourth century.

The practice of translation began in modern-day Turkey. The first known translation was of Saint Babylas in AD 354, who was moved from a cemetery outside the ancient city of Antioch (near the modern-day Turkish city of Antakya) to a purpose-built Byzantine church. There followed a boom in exhumations: Saint Timotheus, Saint Andre and Saint Lukas were all translated to churches in Constantinople (modern-day Istanbul) the following year.

At its peak, the translation trend saw the Christian church issue edicts calling for order amid the energetic violation of sacred tombs. During this period, dozens of bodies were finding their way, by sea and on foot, from tombs into church crypts. The flow of saintly bones was eventually directed from the Middle East, where the saints had died, towards the centre of Rome: the seat of the Roman Catholic church.

The remains of Saint Philip and Saint James were assumed to have been caught up in this frenzy of translation. Unsurprisingly, their skeletons are far from complete today. Only fragments of a tibia, a femur and a mummified foot remain.

The tibia and foot are attributed to Saint Philip, who was one of the original twelve apostles, and was said to have been present at the miraculous feeding of the 5,000.

The femur, meanwhile, was said to belong to Saint James, an altogether more ambiguous figure. Saint Paul calls him “the pillar” of the first Christian church in Jerusalem. This position led to his death, claims the historian Josephus, after the Jewish high priest Ananus had James stoned to death in AD 70. 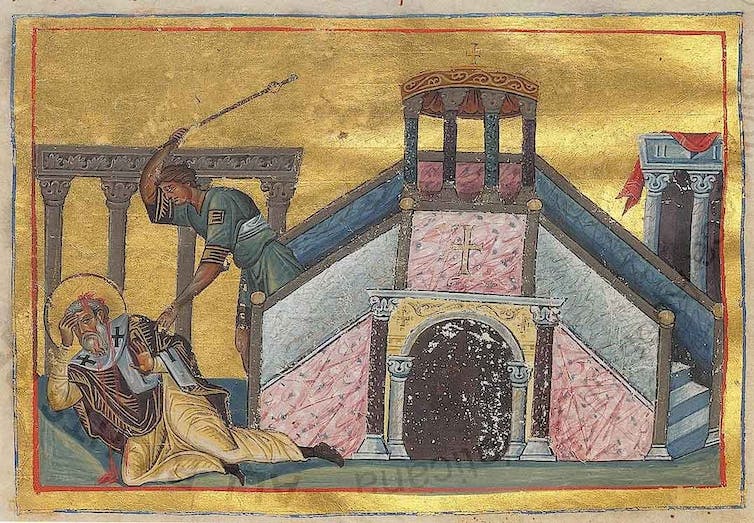 A manuscript dating from late tenth or early eleventh century depicts the martyrdom of Saint James in Jerusalem.

Paul also describes James as the “Lord’s brother”, something that seems to directly contradict Catholic dogma regarding Mary’s lifelong virginity. This has nonetheless led to speculation that James was either Jesus’ cousin, his half-brother, or even his brother.

To authenticate the bones stored in the Santi Apostoli church, our research team needed to work out when the individuals died. That involved peeling back the layers of history that had accumulated on the bones over the course of their long and well-travelled past.

Doing so, we found mercury embedded deep within the pores and cracks of the bone: a common sign of past mummification. There was evidence of sporadic embalming over the centuries, too. We even found insecticide on the relics, which we dated to the 1950s.

During this process it became clear that only the femur was substantial enough to be radiocarbon dated. But we still couldn’t use its collagen in an Accelerator Mass Spectrometer, as we usually would, because we couldn’t be sure that all the contamination was removed from the sample.

Instead, we had a single amino acid within the collagen, called hydroxyproline, isolated and dated using equipment at the University of Oxford. The unequivocal result was that the individual died sometime between 214 and 340, so the femur could not have belonged to Saint James. It originates from another person some 160 to 240 years younger. 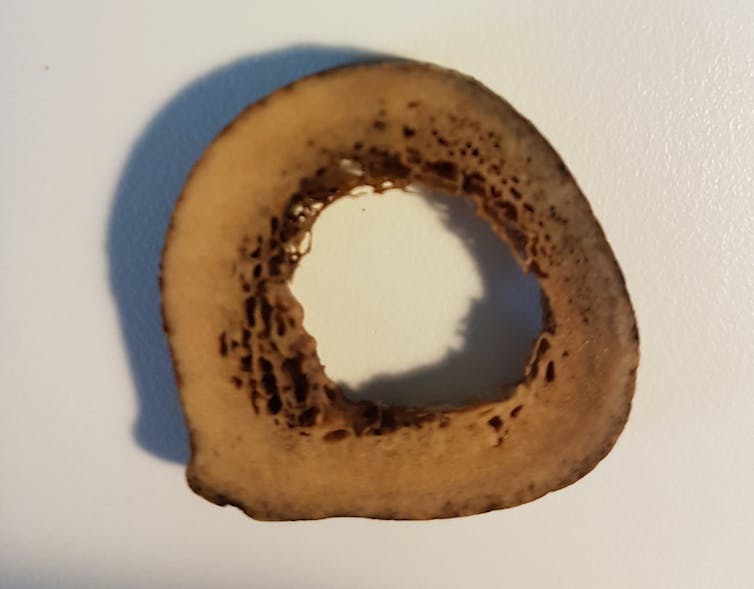 A cross-section of the femur attributed to Saint James.
Author provided

Our international research team also decided to radiocarbon-date some rapeseed oil, which we found, during excavation, at the very bottom of the original altar. The oil dated from between 267 and 539.

As the Santi Apostoli church was likely erected around 556, this oil is older than the church itself and could possibly have followed the relics on their translation from the Middle East to the yet-unbuilt church.

So, we can be sure that the long-protected femur did not belong to Saint James. But our findings have cast an unprecedented flicker of light into the dark period between the death of the apostles around AD 100, and the subsequent storing of Christian relics, centuries later, in the heart of Rome.