Where Does Plastic Pollution Go When It Enters the Ocean?

Of the hundreds of millions of tons of plastic waste we produce each year, it’s estimated that around ten million tons enters the ocean. 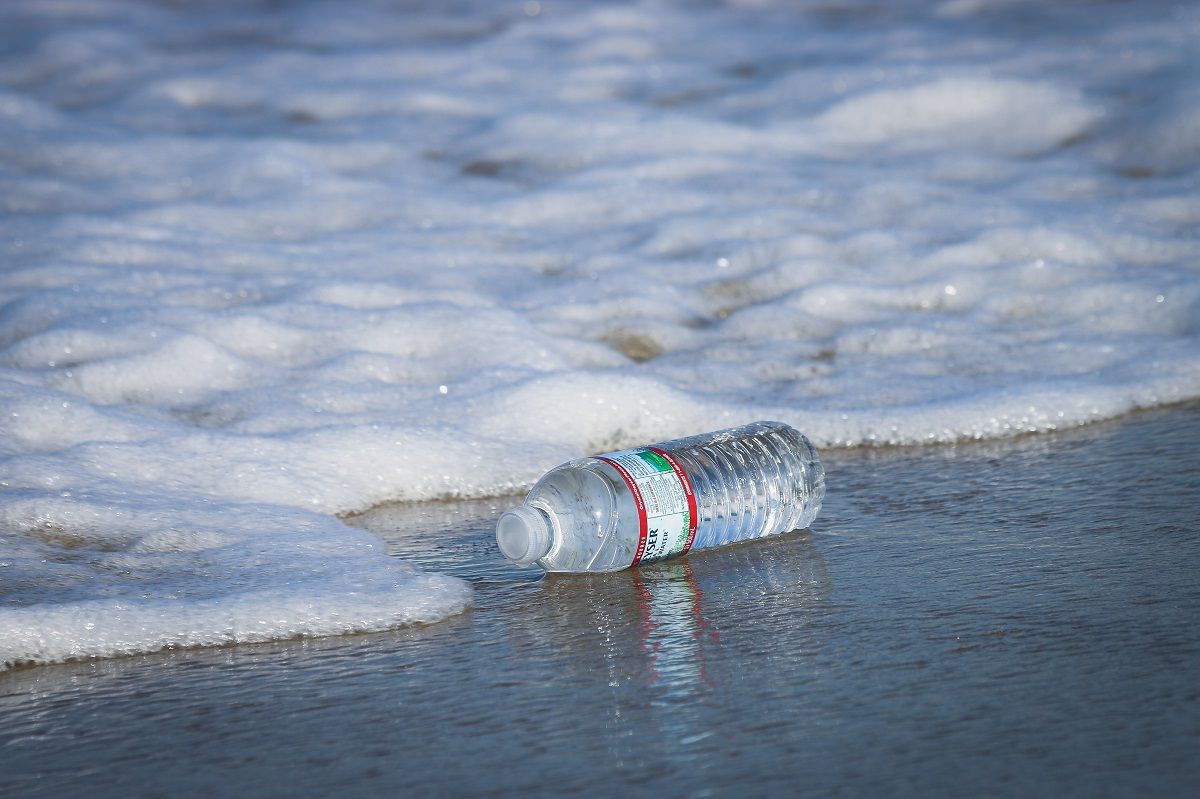 This article about plastic pollution is republished here with permission from The Conversation. This content is shared here because the topic may interest Snopes readers; it does not, however, represent the work of Snopes fact-checkers or editors.

Of the hundreds of millions of tonnes of plastic waste we produce each year, it’s estimated that around ten million tonnes enters the ocean. Roughly half of the plastics produced are less dense than water, and so they float. But scientists estimate that there are only about 0.3 million tonnes of plastic floating at the ocean surface, so where is the rest of it going?

Consider the journey of a plastic fibre that’s shed from your fleece. A heavy rain washes it into a storm drain or a nearby river. Does the tiny fibre settle there? Or does the river carry it out to the coast where it lingers on the seabed? Or does it continue to float further out – finally ending up in the vast open ocean?

The dizzying variety of forms plastic waste can take means that a fibre’s fate is just one mystery among countless others.

Finding out where all the missing plastic ends up can help us figure out which parts of the ocean are most affected by this type of pollution – and where to focus clean-up efforts. But to do that, we need to be able to predict the pathways of different kinds of plastic, which requires large teams of physicists, biologists and mathematicians working together.

That’s what our research team is doing. Here’s what we’ve learned so far.

We already know that large pieces of plastic, like bottles, can float on the sea surface for years, if not centuries, taking a long time to break down. Currents, winds and waves can, after a journey of several years, bring them to the centre of ocean basins, where they accumulate in 1,000km-wide circulating systems known as gyres. The vast “garbage patches” that result resemble more of a soup of plastic than an island of trash.

But the fate of plastic fibres – perhaps the smallest plastic fragments to reach the ocean – is more complex. Large fibres can break up over days and weeks into even smaller pieces, due to turbulence from breaking waves and ultraviolet radiation from the sun. These are called microplastics, and they range in size from five millimetres to specks smaller than bacteria.

Microplastics can be eaten by fish – it’s estimated that one in three ﬁsh eaten by humans contains microplastics. Tinier particles can also be consumed by zooplankton – microscopic animals that float at the surface – which are then eaten by even larger animals, including whales.

Microorganisms can grow on the surface of microplastics too, in a process known as “biofouling” that causes them to sink. Muddy rivers, like the Mississippi or the Amazon, contain clays that settle rapidly when they come into contact with salty ocean water. Microplastics can be carried down by the settling clay, but how much this happens exactly is unknown. 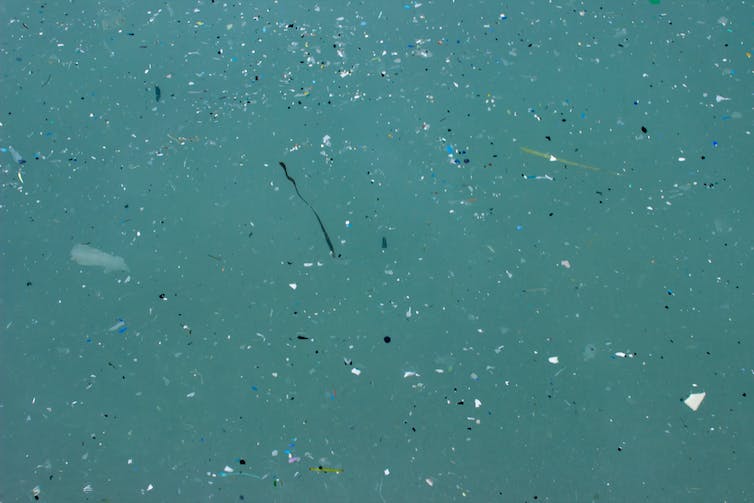 Microplastics are often formed from larger plastic objects that break up in the ocean.
Dirk Wahn/Shutterstock

Quantifying all these outcomes for each bit of plastic is an enormous challenge. What fraction ends up in fish, carried down by clay or covered in microbial slime on the sea bed? Of the fraction of plastics which make it all the way out to the open ocean, it’s unclear how long it takes for biofouling or other forces to pull the particles well below the surface to begin their long, final descent to the sea floor.

With all these complicating factors, it may seem hopeless to predict where plastics ultimately end up. But we’re slowly making progress.

If you have ever been on a boat in choppy waters, you might think you’re just bobbing up and down in the same spot. But you’re actually moving very slowly in the direction of the waves. This is a phenomenon known as the Stokes drift, and it affects floating plastics too.

For particles smaller than 0.1 millimetres, moving through seawater is like us wading through honey. But the viscosity of seawater has less of an influence on plastics larger than one millimetre. Each wave gives these bigger particles an extra push in its direction. According to preliminary research that’s currently under review, this might mean larger plastics are carried out to sea much faster than tiny microplastics, making them less likely to settle in parts of the ocean where more marine life is found – around coasts. 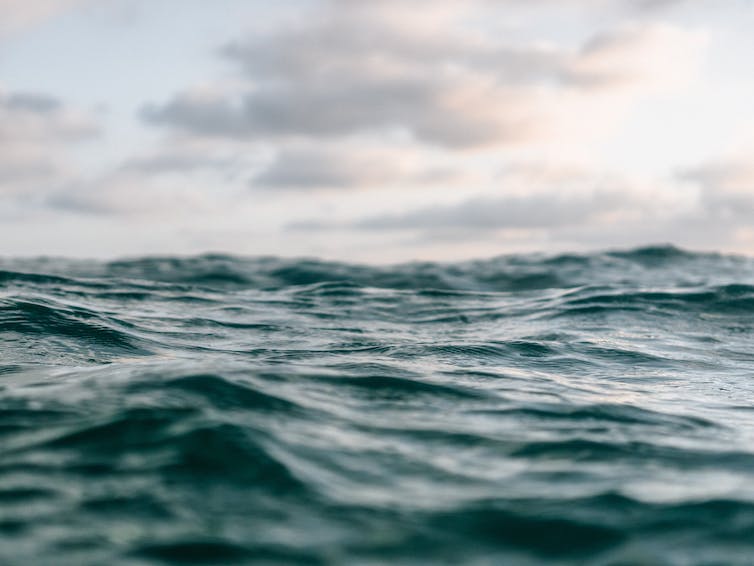 The size and shape of a plastic particle can decide how far and fast waves transport it.
Matt Hardy/Unsplash, CC BY-SA

This research involved studying spherical plastic particles, but microplastic waste comes in all kinds of shapes and sizes, including disks, rods and flexible fibres. How do waves influence where they end up?

A recent study found that non-spherical particles align themselves with the direction of waves, which can slow the rate at which they sink. Lab experiments have further shown how the shape of each plastic particle affects how far it’s transported. Less spherical particles are more likely to go further from coasts.

Solving the mystery of the missing plastics is a science in its infancy. The ability of waves to transport large microplastics faster than previously thought helps us understand why they are now found throughout the world’s oceans, including in the Arctic and around Antarctica. But finding the fibre that was pulled from your fleece is still more challenging than finding a needle in a haystack.

Modelling Microplastic Waste Transport in Rivers and the Coastal Oceans