If its services help deliver misinformation to your home, what responsibility does Comcast have for that? 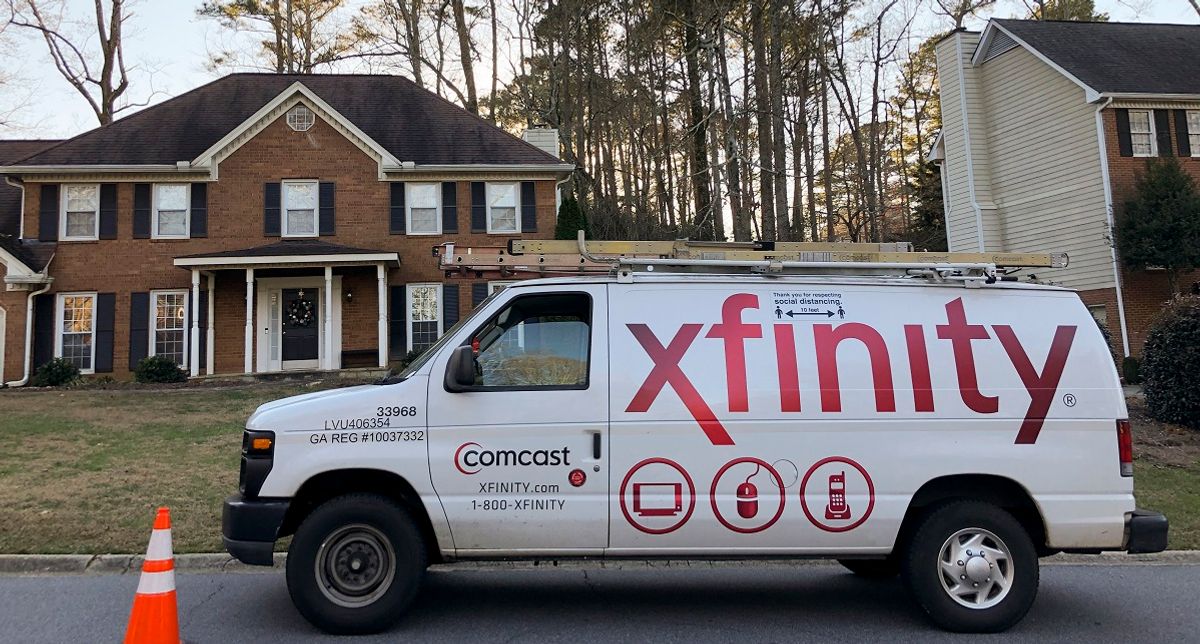 This article about misinformation is republished here with permission from The Conversation. This content is shared here because the topic may interest Snopes readers; it does not, however, represent the work of Snopes fact-checkers or editors.

Looking at political violence in the U.S., a New Jersey state legislator sent a text message to an executive of cable television giant Comcast: “You feed this garbage, lies and all.” The cable channels Fox News and Newsmax were “complicit” in the Jan. 6 U.S. Capitol insurrection, the lawmaker, Assemblyman Paul Moriarty, said. Like other cable companies, Comcast brings those channels into American homes. What, Moriarty asked, was Comcast going to do about them in the wake of the assault on democracy?

A few days later, Washington Post columnist Max Boot suggested Comcast might soon “need to step in and kick Fox News off,” as a consequence of its assistance to Trump’s incitement of insurrection. A similar suggestion by Democratic members of Congress ignited considerable controversy and became a subject of contention at a subsequent hearing on “disinformation and extremism in the media.”

A CNN media reporter, Oliver Darcy, observed that Facebook, Twitter and Google have faced significant pressure to curb disinformation on their platforms – especially since Jan. 6. But, Darcy said, “somehow [cable providers] have escaped scrutiny and entirely dodged this conversation,” even though they are also “lending their platforms to dishonest companies that profit off of disinformation and conspiracy theories.”

As a researcher who studies both television news distribution and how profit motivates the spread of falsehoods, I’m curious about whether it’s feasible – or wise – for cable companies to play moderator to the channels they carry.

A parallel between TV and online services

Since Jan. 6, social media companies have cracked down hard on disinformation campaigns, including cutting off President Donald Trump’s Twitter account. Amazon, Google and Apple also sharply reduced the reach of the Parler social network when that platform refused to remove posts apparently aimed at inciting violence – though Parler has since come back online.

But disinformation is not happening online only. Fox News has increasingly come under fire for on-air staff and guests who hawk right-wing conspiracy theories, including spinning lies that voting machines somehow stole the 2020 presidential election for Joe Biden.

Fox is facing a multibillion-dollar lawsuit about those false claims. The company also recently paid at least US$10 million to settle a lawsuit from the family of a murdered Democratic National Committee staffer over falsely alleging the killing was part of a left-wing plot. 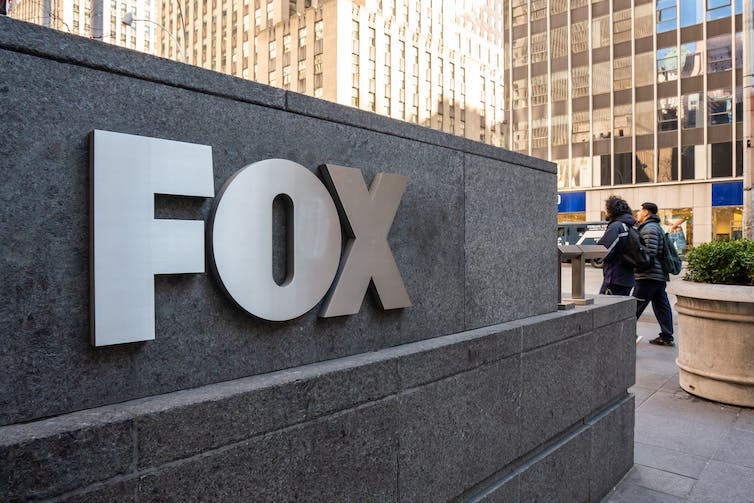 Fox News is just one channel that has brought cable providers under fire.
Alex Tai/SOPA Images/LightRocket via Getty Images

What’s next for Fox News?

Amid the threat of continued political violence, Fox News appears poised to further “turn up the outrage dial” on television.

In recent months, the channel has lost viewers to even farther-right alternatives, like Newsmax and One America News Network, and is responding by firing traditional journalists and increasing the amount of partisan commentary it offers.

Comcast, with 20 million subscribers, represents roughly a quarter of the pay TV market in the U.S., so it might seem Comcast has considerable leverage over Fox News’s content.

But Comcast isn’t just a content distributor through its cable network. The company also owns a huge swath of American media companies, including Fox News’ direct competitors, MSNBC and CNBC. Even if Comcast felt an obligation to lean on Fox, any significant pressure it might seek to apply could easily be met not just with customer complaints, but with legal challenges claiming anti-competitive behavior, particularly if this included threats of kicking Fox off its platform.

In the past, the American public has entrusted the responsibility of determining what sorts of communications do and don’t serve the public interest to public entities, like the Federal Communications Commission, which was originally the Federal Radio Commission.

When radio and television broadcasting began, for instance, they relied exclusively on airwaves owned by the public and regulated by the government. At the height of their powers, from the 1930s through the postwar era, federal regulators tended to side with commercial station owners – as they do today.

But periodically they demonstrated they could do much more than just fine broadcasters for airing obscenities. They did not shy away from stripping broadcast licenses from purveyors of harmful disinformation and inflammatory rumors. The most famous example is probably sham doctor John R. Brinkley, who advertised on air for questionable cures and sham surgeries, which killed dozens of people in the early 20th century before he lost his broadcast license.

Moreover, federal court and Supreme Court decisions established that when the commission reviewed TV and radio stations’ past editorial content as part of considering whether to renew their broadcast licenses, it wasn’t violating their free speech rights. Rather, officials were vetting users of public resources in an effort to protect the public interest.

Cable channels, of course, don’t need the public airwaves, and instead are distributed over privately owned networks. The owners of those systems, including Comcast, are the ones who decide which content providers can reach their subscribers. But their goals are not necessarily aligned with the public good so much as profit for shareholders. 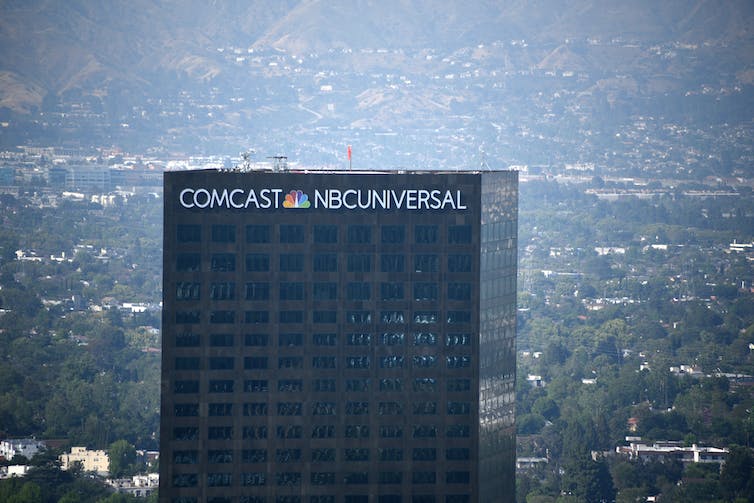 Comcast’s power in the media landscape has long been controversial. The company owns elements in every step of the media pipeline, from content creation to marketing and distribution to consumers.

Critics contend that sort of consolidation is anti-competitive and deprives the public of the benefits of market competition, from decreasing the diversity of content to higher prices and weaker privacy protections.

Media law scholar Tim Wu – who may be joining the Biden administration – has argued that media companies like Comcast should be regulated by a “separations principle” that would bar companies that owned distribution systems from also owning content creators. Such a restriction would almost certainly require Comcast to choose between its media production subsidiaries and its cable network.

Whichever Comcast decided to keep or sell, the cable television system would be a standalone. It would no longer be a producer of content or a competitor with other channels – which might make it less fraught for the company to decide not to do business with content creators of any political stripe who spread inflammatory lies.

Another possibility could be for cable companies to engage in some form of industry self-regulation. They might, for example, establish an independent board to examine problems like Fox’s disinformation spreading. The companies would have to agree to abide by the board’s decisions to sanction or suspend the distribution of channels trafficking in dangerous or inciting disinformation.

Such an approach borrows from established methods in other media industries. These industries follow a model of appealing to independent boards to make controversial decisions, such as film or video game ratings, while blending in more recent self-regulatory measures by digital platforms.

No version of self-regulation is perfect or above criticism. And it may seem worrisome to let cable companies, either individually or collectively, decide on what speech is acceptable for public consumption. Indeed, there is plenty of concern over whether Twitter or Facebook should be making similar decisions unilaterally.

But it’s worth noting that government oversight has been weak for years, with many critics arguing that the FCC doesn’t do much to ensure that even traditional broadcasters promote the public interest.

The cable industry may not use the airwaves, but it does use other scarce public resources, negotiating with local and regional governments to lay wires under streets and on telephone poles over sidewalks across the nation.

Some cable companies even belong to or partner with cellular providers to deliver video wirelessly to mobile devices – which is very much like traditional broadcasting in the sense that it uses public airwaves.

It’s not a huge stretch, then, to imagine local or even federal regulators treating cable TV more like broadcast channels, and even returning to past practices of requiring stations to serve the public interest.