Even death may not be a bar to prosecution for misconduct in public office. 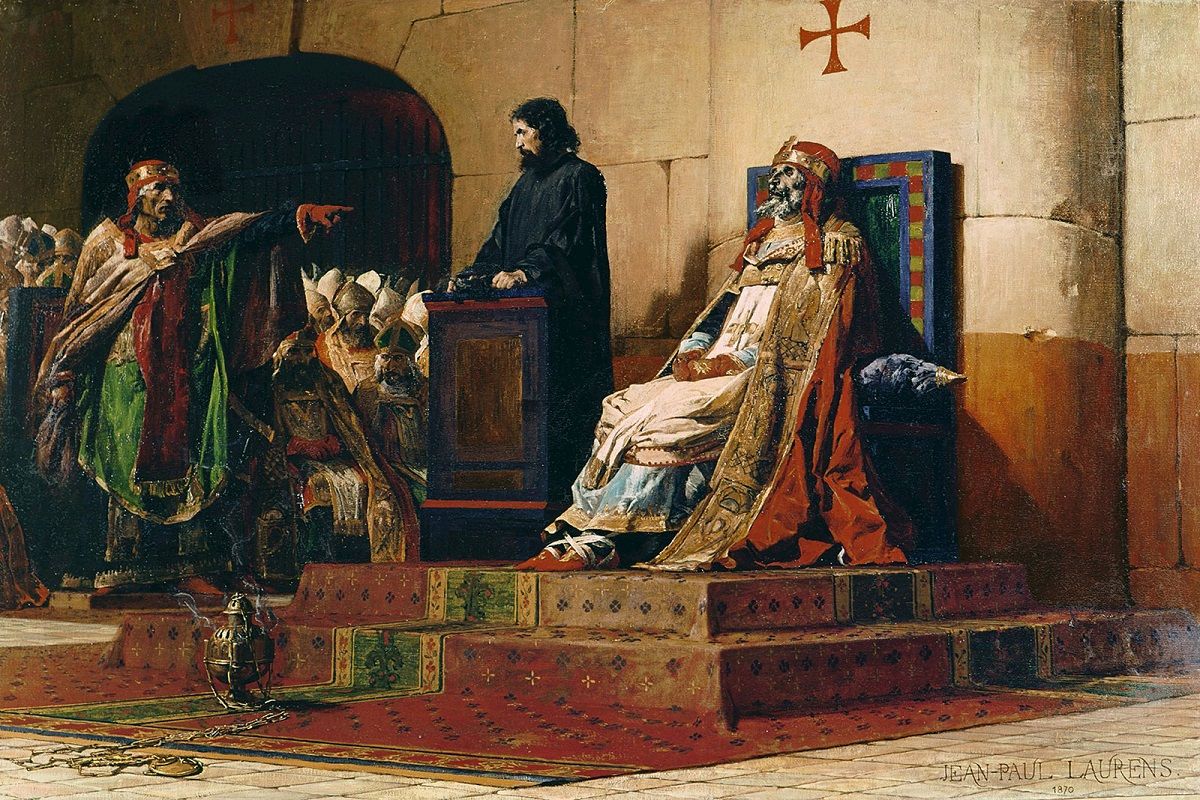 Image Via Jean-Paul Laurens (1870) via Britannica

This article about impeachment after leaving office is republished here with permission from The Conversation. This content is shared here because the topic may interest Snopes readers; it does not, however, represent the work of Snopes fact-checkers or editors.

Donald Trump will face impeachment in February 2021, the first time a US president has been tried twice for “high crimes and misdemeanours”. A single article of impeachment will be passed to the Senate on January 25, accusing Trump of “inciting insurrection” before his supporters attacked the US Capitol building on January 6. Formal arguments will begin in the Senate in the second week of February.

But a media campaign is already well underway, as supporters of the former president – and his political enemies – take to the airwaves to put their case. Prominent among Trump’s defenders has been senior Republican senator, Lindsey Graham, who told Fox News host Sean Hannity that if Trump were to be convicted by the Senate after he leaves office, it would open the door for past presidents to be impeached.

“If you can impeach a president after they’re out of office, why don’t we impeach George Washington?” Graham told Hannity. “He owned slaves. Where does this stop?”

There is of course an obvious flaw in Graham’s comment: being dead, Washington cannot appear to defend himself.

But the history of the early medieval papacy teaches us that even death may not be a bar to prosecution for misconduct in public office. More than 1,000 years ago, the western church was in crisis. There was a bitter dispute between Rome and Constantinople over which was the head of the Christian church. Waves of immigrants had settled in Hungary and Bulgaria, which increased tensions between Constantinople and Rome as they vied for sovereignty over a changing population with shifting allegiances.

These conflicts raised important questions about the qualities that were required of the leaders of Christendom. During this period there was a fairly frequent use of the early medieval equivalent of impeachment. This was a church synod held in Rome, at which the holder of the highest office in Christendom could be tried for transgressions against the traditions and customs of their office. One such synod took place in January 897 and heard charges against the most recent former pontiff, Formosus (pope from 891 to 896).

The only problem was that Formosus had been dead for seven months by the time the trial started. But the new pope, Stephen VI, was of the firm opinion that even when a leader had left office they could still be punished for their transgressions. The synod thus went ahead under somewhat ghoulish circumstances. Pope Stephen had Formosus’ corpse withdrawn from its sarcophagus and brought to the Basilica of St John Lateran in Rome to be put on trial. The corpse was clad in papal vestments and seated on a throne to face charges that Formosus had broken the rules of the church. Close by stood a deacon to answer in Formosus’ name. Stephen VI charged the cadaver with having broken an oath not to return to Rome and of having illegally obtained the title of pope because he was already a bishop at the time of his election.

The alleged crimes took place long before the trial. In July 876, Formosus had been excommunicated for meddling in European power politics and prohibited from celebrating mass by Pope John VIII. But, after his death, the sentence of excommunication was withdrawn by John’s successor Marinus I in 878 and Formosus returned to his job as bishop of Porto.

Despite having blotted his copybook, Formosus was elected pope on October 1 891 and immediately involved himself in politics again.

In Italy, Formosus encouraged insurrection, persuading Arnulf of Carinthia to advance to Rome to drive out the reigning emperor. Arnulf seized Rome by force on February 21 896 but his success was shortlived – before he had the chance to move against the opposition’s stronghold in Spoleto, he was struck with paralysis and was unable to continue the campaign. Paralysis, incidentally, was widely regarded as a divine punishment in the Middle Ages.

It’s important to remember that this was an era in which the papacy changed hands at an alarming rate – almost every year between 896 and 904 saw a new pope pope, sometimes even two. Formosus was succeeded by Pope Boniface VI, who himself died two weeks later. Stephen VI, who was next to sit on the papal throne, had been a supporter of Formosus, but had changed camps and was now aligned with the Spoleto family, at that time all-powerful in Rome.

Stephen VI predictably pronounced Formosus guilty on the grounds that he could not legally have received the papal title since he was the bishop of another see and he had gone back on his oath not to celebrate mass. All his measures, acts and legal decisions were annulled, and all the priestly orders conferred by him were declared invalid. His papal vestments were torn from his body. The three fingers which the dead pope had used in consecrations were cut off his right hand and the corpse was buried in a grave in the cemetery for strangers, only to be removed after a few days and thrown into the river Tiber.

Donald Trump, at present hunkered down at his Mar a Lago resort in Florida, will not suffer the indignities of the corpse of Pope Formosus. But, like Formosus, he will see many (if not all) of his decisions and appointments reversed in these first days of Joe Biden’s presidency. Interestingly, after the death of Stephen VI, Formosus was rehabilitated and his papacy reinstated by the church.

Trump, meanwhile, is rumoured to still be considering a return to US politics. Having lost access to the modern equivalent of Formosus’ three fingers – his social media platforms – he can no longer easily convey favours or inspire his followers. But, as we now know, stranger things have happened.