In his final hours as president, Trump offered clemency to dozens of people including ex-adviser Steve Bannon and rapper Lil Wayne. 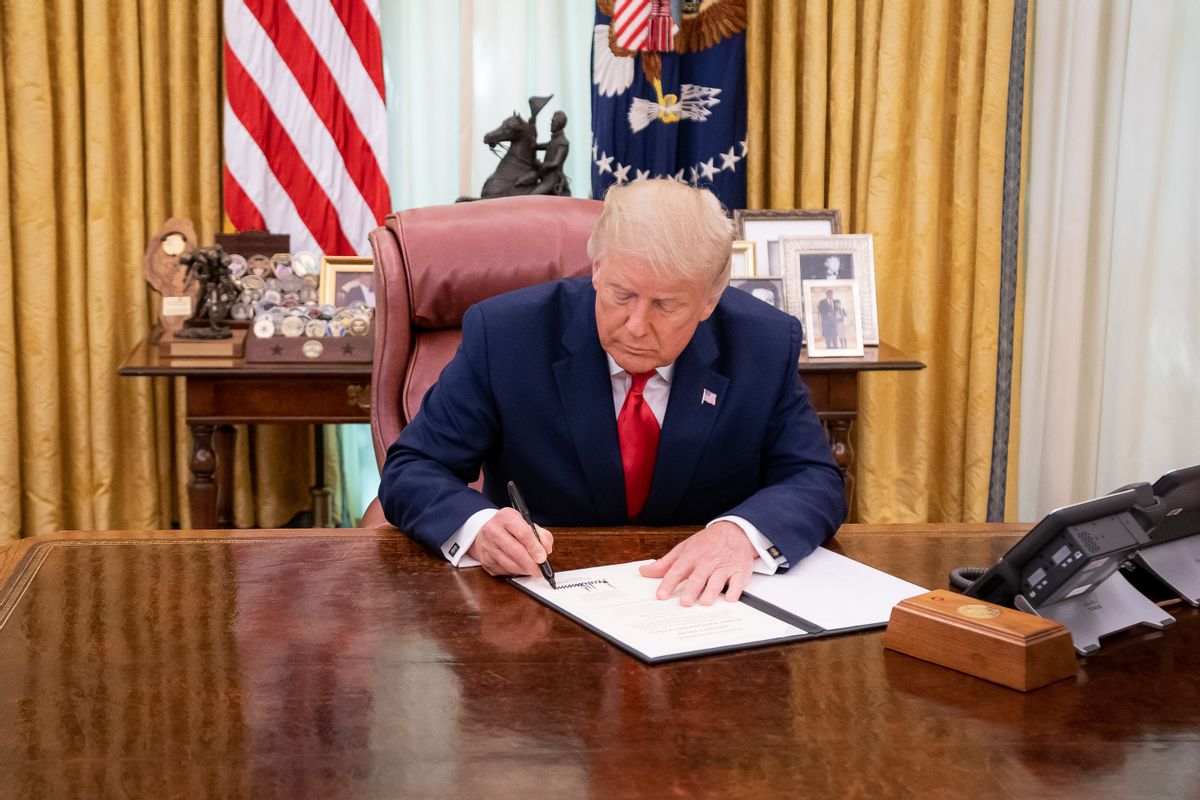 In the final hours of his presidency on Jan. 20, 2021, U.S. President Donald Trump pardoned or commuted the criminal sentences of more than 140 people — including his former campaign adviser Steve Bannon, rapper Lil Wayne, former members of Congress, relatives, and political allies.

Below is a list of everyone Trump offered clemency hours before President-elect Joe Biden's inauguration ceremony based on multiple reports from reputable news outlets and a White House news release.

Just after midnight, the White House released a statement announcing Trump's decision to offer clemency to more than 140 people. The Associated Press reported:

Other presidents have issued controversial pardons before leaving the White House. But perhaps no other commander in chief has so enjoyed using the clemency authority to benefit not only friends and acquaintances but also celebrity defendants and those championed by allies.

That said, Trump did not issue a preemptive pardon for himself, despite reports from aids that he had weighed that option over days (see more details on that below) and the fact that he had explicitly stated his authority to do so. He also did not pardon his children or personal lawyer, Rudy Giuliani.

Here's the full list of people on the White House's "Statement from the Press Secretary Regarding Executive Grants of Clemency:"

Other people who received pardons or commuted sentences from Trump:

Officials predict hundreds of criminal cases will ultimately be filed against right-wing extremists who broke into the U.S. Capitol on Jan. 6 to try to halt a congressional vote to certify Biden's win.

During Trump's final days of office, at least one post circulated on social media alleging a scheme by Trump to pardon those people, some of whom officials say they are considering filing sedition charges against.

However, that post (which we fact-checked here) was fake, and no evidence suggested Trump was going to pardon anyone in the crowd that day.

"There are a lot of people urging the president to pardon the folks [involved]," Sen. Lindsey Graham told Fox News on Jan. 17. "To seek a pardon of these people would be wrong."

Lil Wayne, who has not yet been sentenced for the latest weapons charge, met with Trump and posed for photos five days before the November 2020 election. Other musicians and activists criticized the rapper for posting the photo to social media — a screenshot of which is displayed below — and crediting Trump with helping Black Americans. Will Trump Try To Grant Himself a Preemptive Pardon?

Citing interviews with two people familiar with Trump's pardoning plans — sources who spoke on the condition of anonymity — The Washington Post reported Trump spent days weighing the question of whether to issue preemptive pardons to his adult children, top aides, and himself.

But as of this writing, aides said they no longer expected a preemptive self-pardon or pardons for Trump's relatives.

Advisers encouraged Trump to forgo the option for himself because it could appear he was guilty of something and turn more Republicans against him in his coming Senate impeachment trial, according to news outlets. The New York Times reported:

Hanging over the process is the question of the president’s own potential legal troubles. Mr. Trump’s company faces a criminal investigation from the Manhattan district attorney’s office, which is examining whether the president and his company committed any financial or tax crimes in recent years. That investigation involves state law and would not be affected by any pardon the president might grant himself, which would apply only to federal law.

No president has attempted a self-pardon before, though Trump would not be the first president to pardon family members. In early 2001, former President Bill Clinton controversially pardoned his half-brother Roger Clinton who was convicted for conspiracy to distribute cocaine and distribution of cocaine in 1985. (See our full fact check into that claim here.)

Another preemptive pardon under discussion was for Allen Weisselberg, the chief financial officer of the Trump Organization. But Trump was unlikely to pursue that request out of fear that Weisselberg may forfeit his Fifth Amendment right against self-incrimination, The New York Times said.

What about Rudy Giuliani?

Aides said it is unlikely Trump will offer the privilege to his personal attorney, Giuliani, whose consulting business has come under scrutiny as part of an investigation that led to charges against two of his associates, The Post reported.

On Jan. 18, Giuliani said on his radio show, per The New York Times: “I do not need a pardon. I don’t commit crimes,” though he asserted there was a risk that prosecutors “will try to frame me, like they tried to frame Donald Trump.” He added, “I’m willing to run that risk, and I’m willing to fight ’em by the law."

Who Else Is Expected To Be on Trump's List of Pardons?

Among those under consideration for a pardon or a commutation is the former New York Assembly Speaker Sheldon Silver, 76, who was convicted twice on corruption charges and sentenced to prison last summer, two sources told The New York Times. Reuters later confirmed that reporting.

Additionally, Sholam Weiss, the recipient of what is believed to be the longest-ever white-collar prison sentence, is also under consideration for clemency, per The New York Times. In 2000, he was sentenced to more than 800 years in prison in connection to a fraud scheme that siphoned $450 million from an insurance company, leading to its collapse. He spent a year on the run before being arrested in Austria and extradited to the U.S.

Several people who are familiar with Trump's plans told CNN that Dr. Salomon Melgen — the prominent eye doctor from Palm Beach who is in prison after being convicted on dozens of counts of health care fraud — is expected to be included in the clemency list.

How Many People Has Trump Pardoned Already?

Since the beginning of his term, Trump has granted clemency to 94 people — mostly friends and political allies — including 49 in the final weeks of 2020. They include: