Brandy Vaughan, the founder of the anti-vaccination group Learn the Risk, died at age 45 in December 2020. 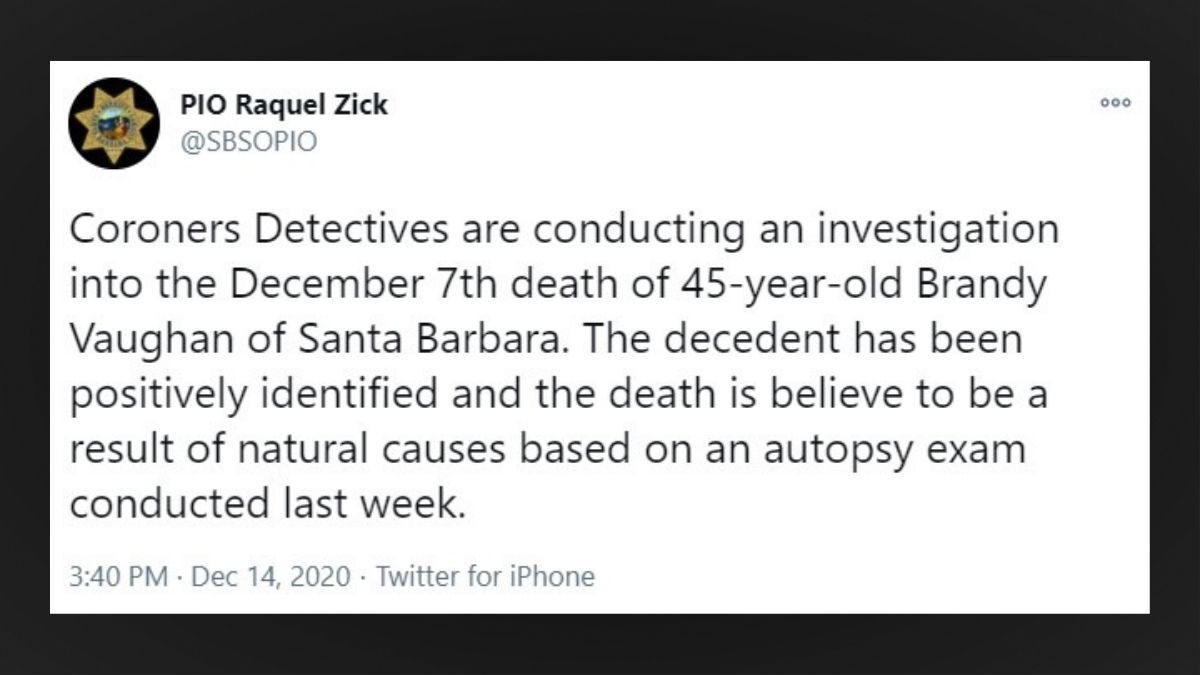 In December 2020, news broke that Brandy Vaughan, the founder and executive director of the anti-vaccination group Learn the Risk, died at the age of 44. Learn the Risk shared the news on their Facebook page, writing:

The vaccine education community has lost a warrior soul on this earthly realm, but I know that she continues to watch over us, and support us in spirit. Let's make Brandy Vaughan proud!!! She created this platform for ALL OF US!! It's time to stand stronger than ever, and continue her legacy. Please share this far and wide! Any fundraiser that has been created by "Tina Marie" is an official fundraiser. Brandy selected a small group to look after her affairs. Official posts will be shared through the #LearnTheRisk platform. We please ask that you honor Brandy, by NOT engaging in drama surrounding her passing. She has a young son that we want to protect. Let's honor his mom by helping to continue her life's mission... EDUCATING the masses on the dangers of vaccines -- THAT is what she would want you to focus your attention on! We love you Brandy!!

Shortly after the news broke, some members of the anti-vax community started to speculate about the cause of Vaughan's death. An article on Medium, for example, claimed without evidence that Vaughan had been "Murdered by Big Pharma." Others pointed to a Facebook post Vaughan had penned in 2019 in which she stated that "foul play" would be the only possibility if she happened to die at a relatively young age.

"If something were to happen to me, it’s foul play and you know exactly who and why — given my work and mission in this life. I’m also NOT accident prone. And I got the highest health rating possible when I went through a battery of medical tests a couple of years ago for my life insurance policy."

There are still a few unanswered questions about Vaughan's death, but police have not reported any suspicion of foul play. On Dec. 14, Santa Barbara County Sheriff Public Information Officer Raquel Zick posted a message on Twitter concerning the investigation into Vaughan's death.

Zick wrote that an autopsy exam was conducted on Vaughan and that her death is believed "to be a result of natural causes." Zick added that a toxicology screening is also being conducted, but it will take a few weeks for those results to come in.

Coroners Detectives are conducting an investigation into the December 7th death of 45-year-old Brandy Vaughan of Santa Barbara. The decedent has been positively identified and the death is believe to be a result of natural causes based on an autopsy exam conducted last week.

The final cause and manner of death determination are pending toxicology screening which normally takes 4-6 weeks. #brandyvaughan While the anti-vaccination group Learn the Risk has started to raise money for a full investigation into Vaughan's death (something Vaughan requested in her December 2019 Facebook post), as of this writing, law enforcement officials believe that Vaughan died due to natural causes.