The Borrowed Customs and Traditions of Christmas Celebrations

While Christmas is ostensibly a Christian celebration of the birth of Jesus, many of the rituals and customs come from other traditions, both spiritual and secular. 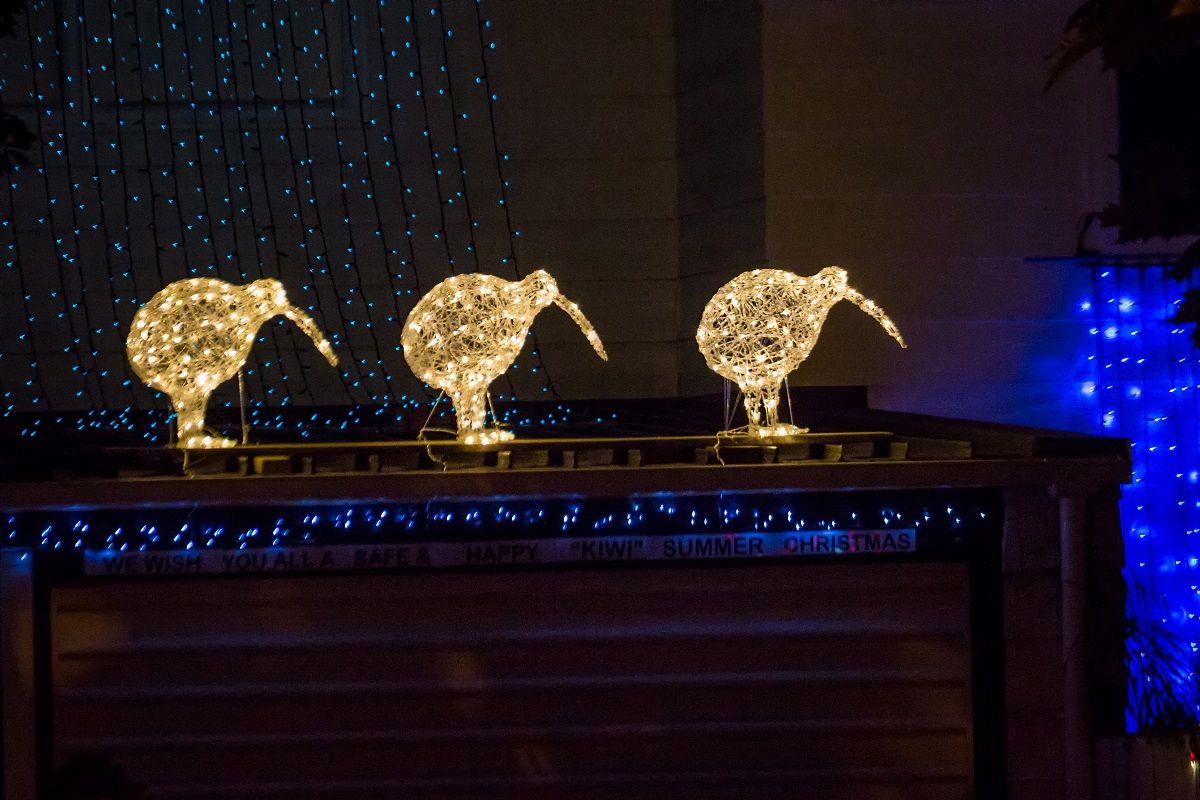 This article about Christmas traditions is republished here with permission from The Conversation. This content is shared here because the topic may interest Snopes readers; it does not, however, represent the work of Snopes fact-checkers or editors.

Not long to go now before many of us get to spread some good tidings and joy as we celebrate Christmas.

The main ways we understand and mark the occasion seem to be rather similar across the world. It’s about time with community, family, food-sharing, gift-giving and overall merry festivities.

But while Christmas is ostensibly a Christian celebration of the birth of Jesus, many of the rituals and customs come from other traditions, both spiritual and secular.

The journey of Christmas into the celebration we know and recognise today is not a straight line.

The first Christmas celebrations were recorded in Ancient Rome in the fourth century. Christmas was placed in December, around the time of the northern winter solstice.

It is not difficult to spot the similarities between our now long-standing Christmas traditions and the Roman festival of Saturnalia, which was also celebrated in December and co-existed with Christian belief for a period of time.

Saturnalia placed an emphasis on the sharing of food and drink, and spending time with loved ones as the colder winter period arrived. There is even evidence that the Romans exchanged little gifts of food to mark the occasion. 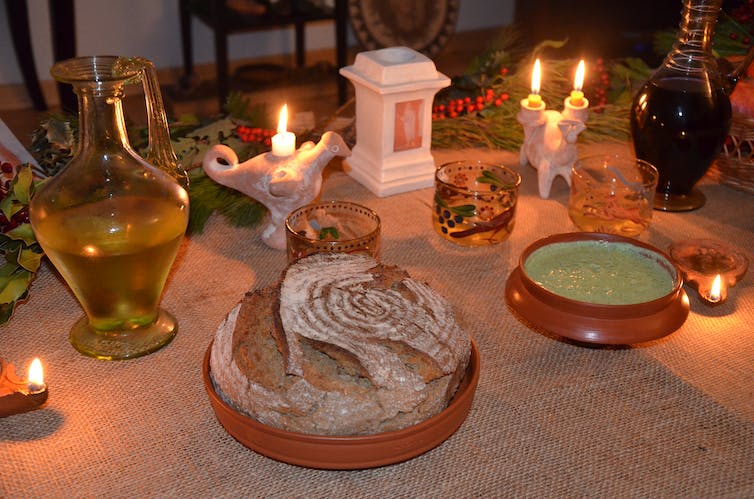 As Christianity took greater hold in the Roman world and the old polytheistic religion was left behind, we can see the cultural imprint of Saturnalia traditions in the ways in which our well-known Christmas celebrations established themselves across the board.

Turning an eye to the Germanic-Scandinavian context also provides intriguing connections. In the Norse religion, Yule was a winter festival celebrated during the period we now roughly associate with December.

The beginning of Yule was marked by the arrival of the Wild Hunt, a spiritual occurrence when the Norse god Odin would ride across the sky on his eight-legged white horse.

While the hunt was a frightening sight to behold, it also brought excitement for families, and especially children, as Odin was known to leave little gifts at each household as he rode past.

Like the Roman Saturnalia, Yule was a time of drawing in for the winter months, during which copious amounts of food and drink would be consumed.

The Yule festivities included bringing tree branches inside the home and decorating them with food and trinkets, likely opening the way for the Christmas tree as we know it today. 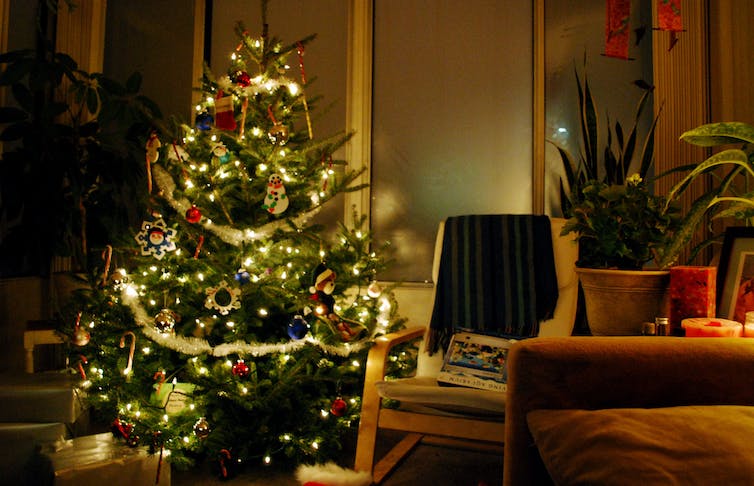 The decorated Christmas tree can trace its roots back to Northern Europe.
Laura LaRose/Flickr, CC BY

The influence of Yule on the festive season of Northern European countries is still evident in linguistic expression too, with “Jul” being the word for Christmas in Danish and Norwegian. The English language also maintains this connection, by referring to the Christmas period as “Yuletide”.

Through the idea of gift-giving, we see the obvious connections between Odin and Santa Claus, even though the latter is somewhat of a popular culture invention, as put forward by the famous poem A Visit from St Nicholas (also known as The Night Before Christmas), attributed to American poet Clement Clarke Moore in 1837 (although debate continues over who actually wrote the poem).

The poem was very well-received and its popularity spread immediately, going well beyond the American context and reaching global fame. The poem gave us much of the staple imagery we associate with Santa today, including the first ever mention of his reindeer.

But even the figure of Santa Claus is evidence of the constant mixture and mingling of traditions, customs and representations.

Santa’s evolution carries echoes of not only Odin, but also historical figures such as Saint Nicholas of Myra — a fourth-century bishop known for his charitable work — and the legendary Dutch figure of Sinterklaas that derived from it. 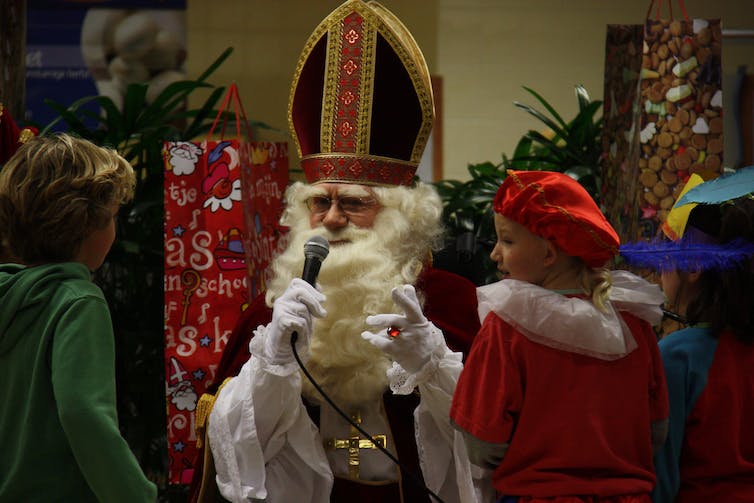 Christmas down under in the summer

The idea of connecting Christmas to winter festivals and drawing in customs makes the most sense in the colder months of the Northern hemisphere.

In the Southern hemisphere, in countries such as New Zealand and Australia, the traditional Christmas celebrations have evolved into their own specific brand, which is much more suited to the warmer summer months.

Christmas is an imported event in these areas and acts as a constant reminder of the spread of European colonialism in the 18th and 19th centuries.

Celebrating Christmas still carries the influence of European contexts, being a time for merriment, gift-giving and community spirit.

Even some of the traditional foods of the season here are still indebted to Euro-British traditions, with turkey and ham taking centre stage.

All the same, as Christmas falls in the summer down under, there are also different ways to celebrate it in New Zealand and other regions that clearly have nothing to do with winter festivals.

Barbecues and beach days are prominent new traditions, as borrowed practices co-exist with novel ways of adapting the event to a different context. 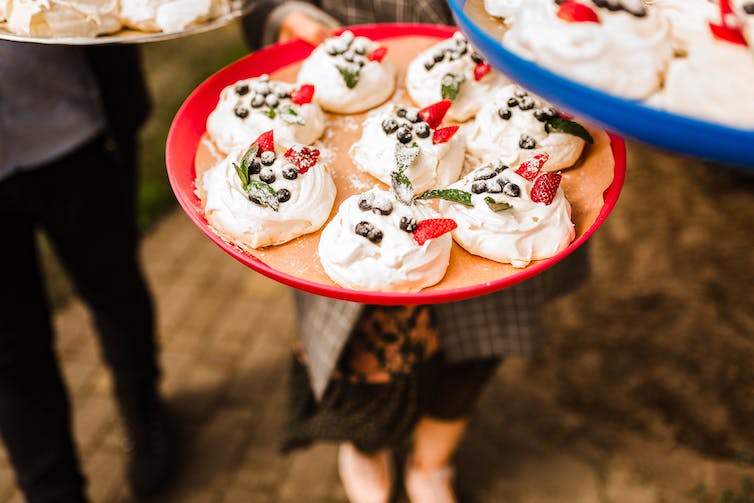 Try a pavlova, something more summery for Christmas in New Zealand.
Marco Verch Professional/Flickr, CC BY

The wintery Christmas puddings are often exchanged for more summery pavlovas, whose fresh fruit toppings and meringue base certainly befit the warmer season to a greater extent.

The transition to outdoor Christmas celebrations in the Southern hemisphere is obviously locked in common sense because of the warmer weather.

Nonetheless, it also shows how both cultural and geographical drivers can influence the evolution of celebrating important festivals. And if you really want to experience a cold Christmas down under, there is always a mid-year Christmas in July to look forward to.