Was Jesus Really Born in Bethlehem? 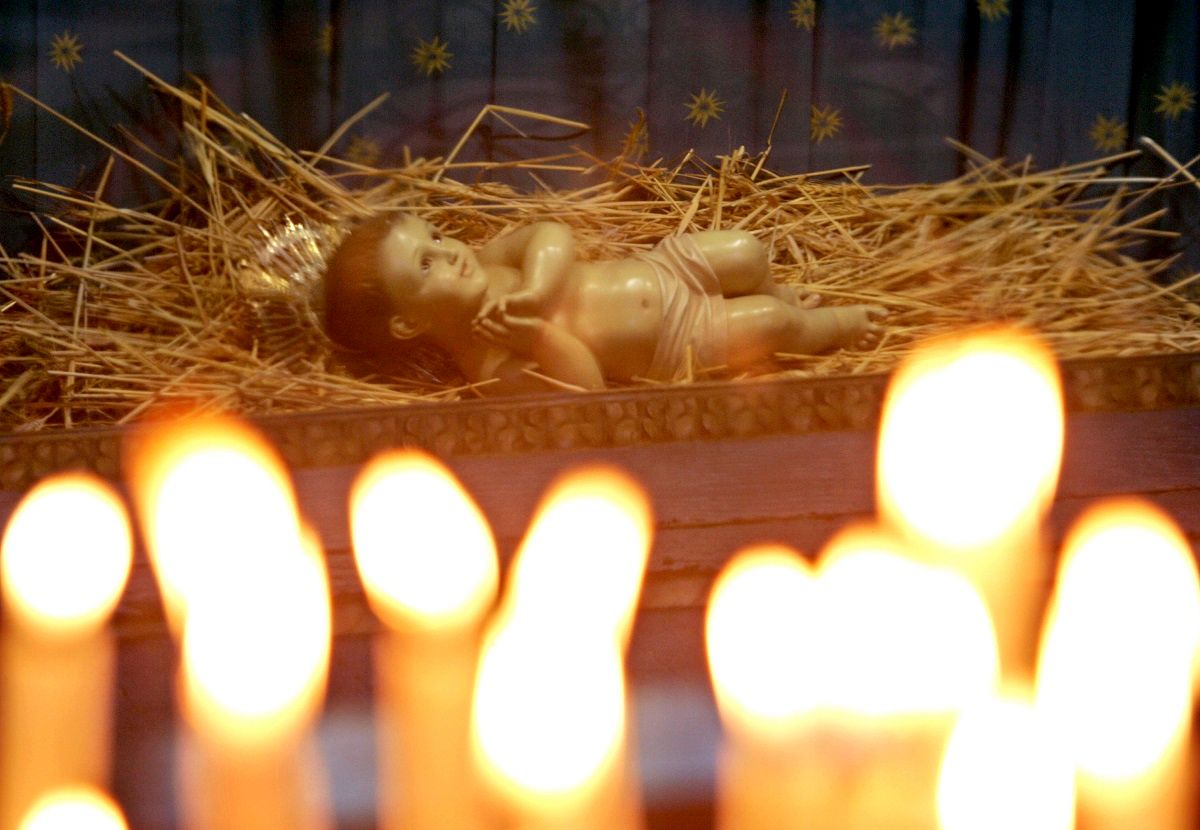 Every Christmas, a relatively small town in the Palestinian West Bank comes center stage: Bethlehem. Jesus, according to some biblical sources, was born in this town some two millennia ago.

The Gospels’ different views might be hard to reconcile. But as a scholar of the New Testament, what I argue is that the Gospels offer an important insight into the Greco-Roman views of ethnic identity, including genealogies.

According to the Gospel of Matthew, the first Gospel in the canon of the New Testament, Joseph and Mary were in Bethlehem when Jesus was born. The story begins with wise men who come to the city of Jerusalem after seeing a star that they interpreted as signaling the birth of a new king.

It goes on to describe their meeting with the local Jewish king named Herod, of whom they inquire about the location of Jesus’ birth. The Gospel says that the star of Bethlehem subsequently leads them to a house – not a manger – where Jesus has been born to Joseph and Mary. Overjoyed, they worship Jesus and present gifts of gold, frankincense and myrrh. These were valuable gifts, especially frankincense and myrrh, which were costly fragrances that had medicinal use.

The Gospel explains that after their visit, Joseph had a dream where he was warned of Herod’s attempt to kill baby Jesus. When the wise men went to Herod with the news that a child had been born to be the king of the Jews, he made a plan to kill all young children to remove the threat to his throne. It then mentions how Joseph, Mary and infant Jesus left for Egypt to escape King Herod’s attempt to assassinate all young children.

Matthew also says that after Herod died from an illness, Joseph, Mary and Jesus did not return to Bethlehem. Instead, they traveled north to Nazareth in Galilee, which is modern-day Nazareth in Israel.

The Gospel of Luke, an account of Jesus’ life which was written during the same period as the Gospel of Matthew, has a different version of Jesus’ birth. The Gospel of Luke starts with Joseph and a pregnant Mary in Galilee. They journey to Bethlehem in response to a census that the Roman emperor Caesar Augustus required for all the Jewish people. Since Joseph was a descendant of King David, Bethlehem was the hometown where he was required to register.

The Gospel of Luke includes no flight to Egypt, no paranoid King Herod, no murder of children and no wise men visiting baby Jesus. Jesus is born in a manger because all the travelers overcrowded the guest rooms. After the birth, Joseph and Mary are visited not by wise men but shepherds, who were also overjoyed at Jesus’ birth.

Luke says these shepherds were notified about Jesus’ location in Bethlehem by angels. There is no guiding star in Luke’s story, nor do the shepherds bring gifts to baby Jesus. Luke also mentions that Joseph, Mary and Jesus leave Bethlehem eight days after his birth and travel to Jerusalem and then to Nazareth.

The differences between Matthew and Luke are nearly impossible to reconcile, although they do share some similarities. John Meier, a scholar on the historical Jesus, explains that Jesus’ “birth at Bethlehem is to be taken not as a historical fact” but as a “theological affirmation put into the form of an apparently historical narrative.” In other words, the belief that Jesus was a descendant of King David led to the development of a story about Jesus’ birth in Bethlehem.

Raymond Brown, another scholar on the Gospels, also states that “the two narratives are not only different – they are contrary to each other in a number of details.” 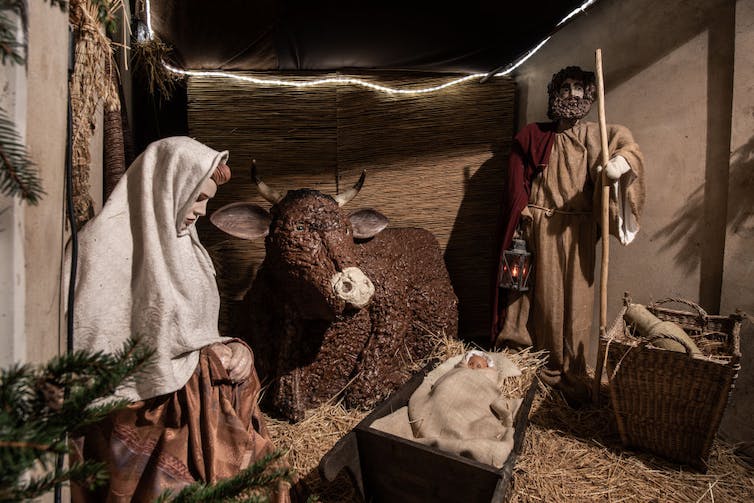 A Nativity scene showing the birth of Jesus in a manger.
Swen Pförtner/picture alliance via Getty Images

What makes it more difficult is that neither of the other Gospels, that of Mark and John, mentions Jesus’ birth or his connection to Bethlehem.

The Gospel of Mark is the earliest account of Jesus’ life, written around A.D. 60. The opening chapter of Mark says that Jesus is from “Nazareth of Galilee.” This is repeated throughout the Gospel on several occasions, and Bethlehem is never mentioned.

A blind beggar in the Gospel of Mark describes Jesus as both from Nazareth and the son of David, the second king of Israel and Judah during 1010-970 B.C. But King David was not born in Nazareth, nor associated with that city. He was from Bethlehem. Yet Mark doesn’t identify Jesus with the city Bethlehem.

The Gospel of John, written approximately 15 to 20 years after that of Mark, also does not associate Jesus with Bethlehem. Galilee is Jesus’ hometown. Jesus finds his first disciples, does several miracles and has brothers in Galilee.

This is not to say that John was unaware of Bethlehem’s significance. John mentions a debate where some Jewish people referred to the prophecy which claimed that the messiah would be a descendant of David and come from Bethlehem. But Jesus, according to John’s Gospel, is never associated with Bethlehem but with Galilee, and more specifically, with Nazareth.

The Gospels of Mark and John reveal that they either had trouble linking Bethlehem with Jesus, did not know his birthplace, or were not concerned with this city.

During the period of Jesus’ life, there were multiple perspectives on the Messiah. In one stream of Jewish thought, the Messiah was expected to be an everlasting ruler from the lineage of David. Other Jewish texts, such as the book 4 Ezra, written in the same century as the Gospels, and the Jewish sectarian Qumran literature, which was written two centuries earlier, also echo this belief.

But within the Hebrew Bible, a prophetic book called Micah, thought to be written around B.C. 722, prophesies that the messiah would come from David’s hometown, Bethlehem. This text is repeated in Matthew’s version. Luke mentions that Jesus is not only genealogically connected to King David, but also born in Bethlehem, “the city of David.”

Genealogical claims were made for important ancient founders and political leaders. For example, Ion, the founder of the Greek colonies in Asia, was considered to be a descendant of Apollo. Alexander the Great, whose empire reached from Macedonia to India, was claimed to be a son of Hercules. Caesar Augustus, who was the first Roman emperor, was proclaimed as a descendant of Apollo. And a Jewish writer named Philo who lived in the first century wrote that Abraham and the Jewish priest and prophets were born of God.

Regardless of whether these claims were accepted at the time to be true, they shaped a person’s ethnic identity, political status and claims to honor. As the Greek historian Polybius explains, the renown deeds of ancestors are “part of the heritage of posterity.”

So today, when the importance of Bethlehem is heard in Christmas carols or displayed in Nativity scenes, the name of the town connects Jesus to an ancestral lineage and the prophetic hope for a new leader like King David.