A Tea-Party Group Is Fundraising Off Their Call for Martial Law. Where’s That Money Going?

Snopes did a little digging into the We The People Convention and learned it has donated a significant amount of money to a PAC run by the Convention’s own president. Why is that? 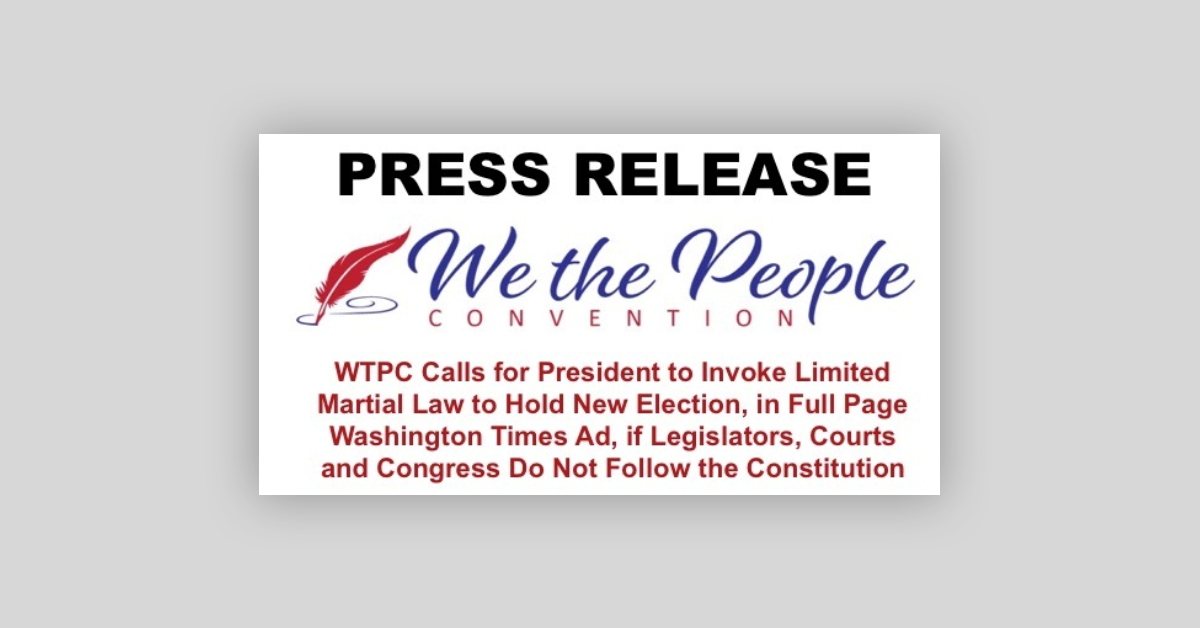 On Dec. 1, 2020, Michael Flynn, the retired and recently pardoned U.S. Army lieutenant general and former Trump national security adviser, tweeted a link to a lengthy paid advertisement placed in the Washington Times. The ad, created by an obscure, Ohio Tea Party-linked group named We the People Convention, called for “limited martial law” so that a do-over election overseen by the U.S. military could be completed.

The ad, filled with unfounded or debunked allegations of widespread election fraud, made inflammatory claims about what were presented to be existential threats to American democracy and the U.S. Constitution due to the election of Joe Biden. It invoked the specter of political violence that directly preceded the Civil War as a reason to suspend the Constitution and overturn the results of the 2020 presidential election. It accused political opponents of President Donald Trump of outright treason. The ad implored Trump to “take action now before there is no peaceful way left to preserve our Union.”

Given the seriousness of those charges, as well as the unprecedented and anti-democratic remedy of military force to overturn the results of a democratically held election, one might assume that the underlying organization behind the ad — We The People Convention — has equally lofty plans to "preserve our Union" with funds the organization is currently soliciting. But that assumption would be pretty far off the mark. We The People Convention's primary concern at the moment, based on their website, is advertising the founder's podcast and fund-raising for a yet-to-be-realized “Ohio State Wide Weekly Radio Network.”

Here, Snopes uses financial and Federal Election Commission (FEC) documents, as well as past reporting on the We the People Convention's founder, to demonstrate that for all of the group's bluster, much of the money it has raised has financially benefited its founder — Portage County (Ohio) Tea Party Executive Director Tom Zawistowski — his companies, or his other political misadventures. Who Is Tom Zawistowski, and What Is the We the People Convention?

Zawistowski has been active in Ohio Tea Party circles for years, though "the exact extent of his influence is debatable," according to Cleveland.com. Zawistowski has served as Portage County Tea Party executive director since 2009 and We the People Convention president since 2011. We the People Convention, which Zawistowski founded, once held actual conventions, but by 2016 it effectively (and at one point legally) ceased to exist as an active Ohio corporation. In 2019, however, Zawistowski refiled the corporation’s business papers and began accepting donations for his radio project.

Making outlandish claims or threats in response to election results he dislikes is not new to Zawistowski. In April 2013, for example, when he decisively lost his bid to become chair of the Ohio Republican Party, he publicly toyed with the idea of “an insurrection by conservative, tea-party affiliates from the party,” according to the The Columbus Dispatch.

In 2018, Zawistowski made headlines after an Ohio gubernatorial campaign accused him of "extortion" over his solicitation of a $1 million donation to We the People Convention in return for an endorsement from the Portage County Tea Party. “I hope that the [Mary] Taylor/[Nathan] Estruth [for Lt. Gov.] campaigns will see the benefits of our offer and give us the incentives we need to feel good about entering into this relationship,” Zawistowski reportedly wrote in an email to the Taylor campaign.

Zawistowski received no donation and denied any wrongdoing, but Cleveland.com reported that Zawistowski “felt jilted by past candidates seeking endorsements who failed to follow through on their promises, and the $1 million would leave him and others in his movement with something tangible.”

Where Does Money Donated to We the People Convention Go?

We the People Convention's website says donations support the aforementioned radio project and also “support the cost of our emails, websites, robo calls, social media marketing, printing costs, and our travel costs for going around the state and nation talking to Conservative Groups.” This is an incomplete description for at least two reasons. First, it neglects to mention that We the People Convention donated $15,000 to Zawistowski's own Freedom for All PAC in the most recent election cycle. Second, it neglects to mention that Zawistowski owns companies that may provide several of the aforementioned logistical services. Though we do not know whom We the People Convention pays for these logistical services, Zawistowski's PACs have paid his own company large sums of money.

FEC records (at least using FEC data through October 2020) indicate that in the 2019-2020 election cycle, Zawistowski's Freedom for All PAC received over $15,000 from Zawistowski's We the People Convention. It is unclear how this donation would go to supporting the proposed radio network or the aforementioned logistical costs the donations purport to cover. Zawistowski declined to answer any of our questions about the PAC, telling us via email that “All the appropriate paperworks [sic] has been filed with the FEC for the Freedom for All PAC and we, unlike you and your partners on the left, actually follow the law and respect the law.”

These same FEC records also demonstrate that Zawistowski's PACs pay Zawistowski's private company as a vendor. Freedom for All PAC’s largest expense, according to data collected by the political finance transparency group OpenSecrets, was services rendered by Zawistowski’s TRZ Communication Services. That company, founded by Zawistowki, received over $24,000 from Freedom for All PAC in the recent election cycle. TRZ Communications is the parent company — among other things — of a company that performs mass email and phone messaging services. Though the amount of money involved is much smaller, the Ohio People's PAC's largest vendor is also TRZ Communication Services.

Campaign Legal Center (CLC) is a nonpartisan, nonprofit organization that “advances democracy through law at the federal, state and local levels.” According to the CLC's Erin Chlopak, there may well be nothing strictly illegal about Zawistowski’s use of funds, but his actions are representative of a broader transparency problem in political fundraising. In reference to our findings, Cholpack, the CLC’s director of campaign finance strategy, told us in a phone interview, “I think you’ve landed upon a phenomenon that, in the campaign finance world, is referred to as a scam PAC.” Such PACs and other political organizations like it, she said, “often take advantage of older [and] less politically savvy voters and donors” and provide limited transparency about the specific uses of donated funds. The fact that such a campaign may financially or politically benefit its founder is certainly a testament to transparency problems in political advertising, but its viral success is evidence of the degree to which fringe ideas have become mainstream and potentially dangerous. In a series of tweets, J.J. MacNab, a fellow at George Washington University's Program on Extremism, argued that the ad could incite violence not because it would work to achieve martial law, "but because when it doesn't happen, it could stir up a number of violent acts from the true believers."

Military leaders have also echoed these concerns. That retired Lt. General Flynn and other former high-ranking military officials tweeted or endorsed an ad calling for martial law in response to an election result is dangerous, according to Jim Golby, a former Trump White House official and retired Army strategist who is now a senior fellow at the University of Texas at Austin’s Clements Center for National Security. Such endorsements "undermine our democracy, and create a real security threat," he told Military Times, explaining that, "by speaking out on fringe media or retweeting this information, they are likely to influence some Americans and ensure that harmful messages like these get oxygen.”

There appears to be plenty of oxygen. What We The People Convention demonstrated is that an obscure group soliciting donations to build a local radio network is sufficiently capable of convincing former high-ranking military members to endorse martial law and the suspension of the U.S. Constitution.