Batmen and Unicorns: Inside the Original Moon Hoax 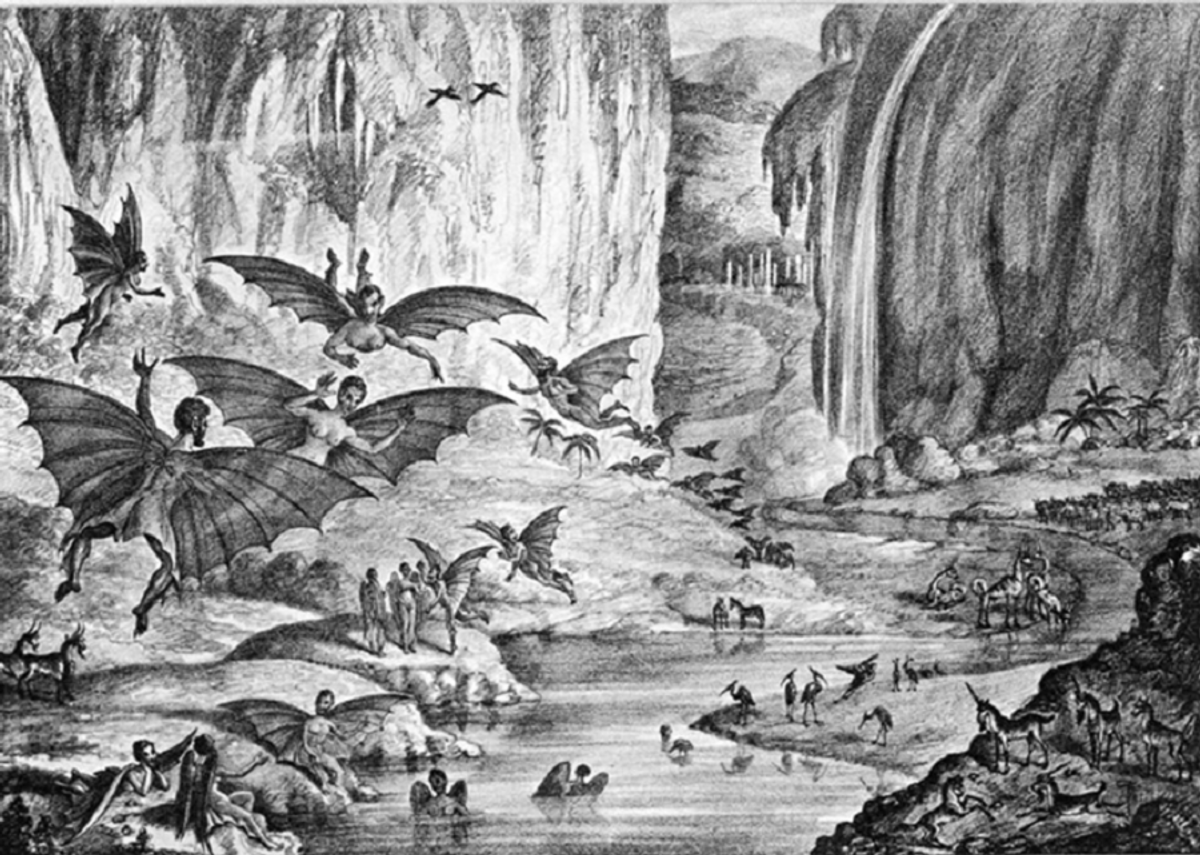 In 16th-century Britain a common saying to describe hoaxing someone was “to make one believe the Moon is made of green cheese”. Absurd, of course. So perhaps people were more credulous by the middle of the 19th century, when a newspaper editor perpetrated what became known as the Great Moon Hoax, persuading gullible readers that on the Moon you could find unicorns and other fantastic beasts.

The Great Moon Hoax refers to six articles in the New York Sun headlined “Great Astronomical Discoveries” and allegedly reprinted from The Edinburgh Journal of Science. Beginning on August 25 1835, they revealed a lunar ecology and civilisation. The hoax tested the parameters of media credibility and “fake news” in the pre-telegraphic age. The stories circulated to other papers around the world.

The newspaper published these supposed reports from observations by astronomer royal, John Herschel, using the most powerful telescope yet invented. According to the reports, this telescope was connected to an “oxy-hydrogen” projector which enabled it to screen moving pictures. They visualised forests, seas and vast deposits of precious minerals, teeming with life forms, including unicorns, intelligent beavers and “man-bats” (Vespertilio-homo). These flew around naked and worshipped in triangular temples.

The wonders of the moon were revealed ever more sensationally, until the telescope apparently caught fire – its enormous lens exposed to South African sunlight acting as a “burning glass”.

New York Sun reporter Richard Adams Locke (1800–1871) later admitted writing the articles, satirising speculations by the Rev Thomas Dick (1774-1857), the most widely read popular astronomer on both sides of the Atlantic at the time, who kept to what he saw as a literal interpretation of the Bible’s account of creation. This despite geological finds dating back into “deep time” and Charles Darwin’s observations about evolution offering evidence to the contrary. So Locke’s descriptions of the planets – and even the Sun – included details about populations of “unfallen” beings that God had put there – as the Bible told the story, it was only Earth that had been corrupted by “original sin”. It was Locke’s way of satirising what he called Dick’s naïve “science fiction”.

The Moon Hoax is a significant event in Dundee’s cultural history – but also science fiction in general. It’s a springboard for issues still topical today: clashes between cosmic views of faith and science as well as the growth and power of modern media and their relationship with public trust, facts and imagination.

Dick’s The Christian Philosopher, or the Connexion of Science and Philosophy with Religion (1823) predicted that signs of “lunarian” life would soon be detected once telescopes could observe them in sufficiently close-up detail. He devoted himself to scientific, philosophical and religious works, acquiring widespread popularity and influence among politicians, writers and thinkers, particularly in the evangelical United States.

Dick promoted the “plurality of worlds” – the theory that every planet must be inhabited because the divine plan would never create without purpose. His magnum opus Celestial Scenery or The Wonders of the Planetary System Displayed (1838) showcased this, calculating our solar system contained more than 21 trillion inhabitants. He based this calculation on planetary surface areas multiplied by English population density. Hence the Moon might contain “beings far more numerous, and perhaps more elevated in the scale of intellect, than the inhabitants of our globe”.

The “Law of Truth” ought never for a moment to be sported with … It is to be hoped that the author of the deception to which I have adverted, as he advances in years and wisdom, will perceive the folly and immorality of such conduct.

Locke responded with an open broadside:

So far from feeling that I deserve the coarse reproaches of Dr Dick, I think it quite laudable in any man to satirise … that school of crude speculation and cant of which he is so eminent a professor.

Locke’s lunar paradise hoodwinked a global readership because of expectations raised in the popular imagination by Dick’s “outrage upon science”, which prepared them “to swallow any thing however absurd … recommended by this peculiar stamp”. 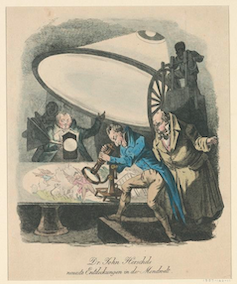 A German lithograph purporting to show Herschel’s apparatus and its method of projection.
University of Dundee, Author provided

Though not destroying Dick’s reputation, the hoax challenged his prioritisation of belief over evidence, foreshadowing the fundamental intellectual crises of the mid-Victorian age. Nevertheless, Dick continued to popularise science and democratise access to astronomy. Dundee’s unique public observatory is a bequest from one of Dick’s devotees, John Mills.

Whether or not Dick’s speculations constituted science fiction, they inadvertently midwifed the modern genre through Locke’s parodies. The editor and owner of the New York Herald, James Gordon Bennett, credited Locke with inventing what he called “A New Species of Writing” – “the scientific novel”.

The Dundee Moon Hoax certainly inspired the “lost Scottish father” of American sci-fi, Robert Duncan Milne who grew up in nearby Cupar in the 1840s. His own tales of astronomical discovery bear many similarities to Locke’s lunar utopia. It provided a rich context which shaped Milne’s imagination, driven by creative tensions between scientific secularism, fantastic new technologies and orthodox beliefs.