How White Became the Color of Suffrage

During her victory speech, Kamala Harris, the first woman to be elected vice president of the United States, paid tribute to women activists not only in her words, but also in her appearance. 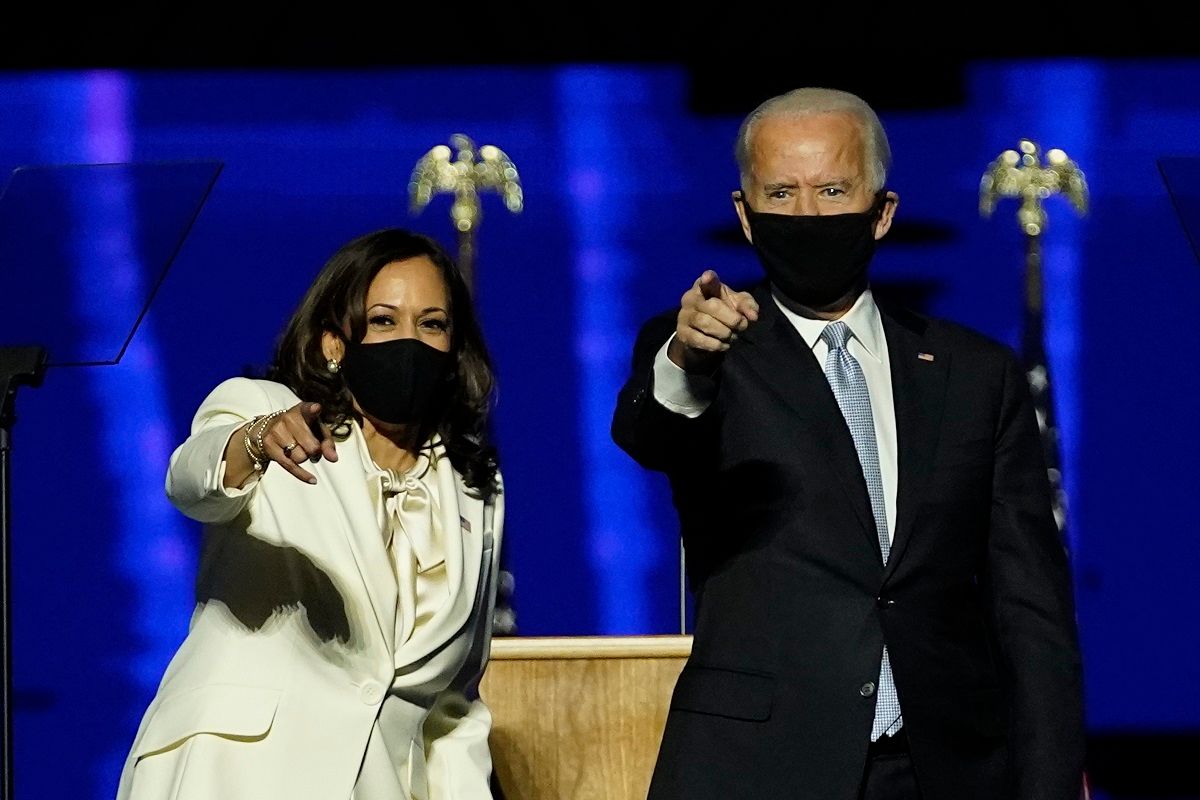 During her victory speech, Kamala Harris, the first woman to be elected vice president of the United States, paid tribute to women activists not only in her words, but also in her appearance.

Harris’ decision to wear a white pantsuit was a nod to suffragists and to women politicians like Hillary Clinton and former vice presidential candidate Geraldine Ferraro. Meanwhile, Harris’ white silk shirt with a pussy bow was a nuanced reference to the women protests that erupted four years ago.

As a historian who writes about fashion and politics, I like these types of sartorial gestures. They show the relevancy and power of fashion statements in our political system. Harris, like the suffragists and political leaders that came before her, is using her clothes to control their image and spark a conversation.

However, today’s strong association between the color white and the suffragists isn’t fully accurate. It’s based more on the black-and-white photographs that circulated in the media, which obscured two colors that were just as important to the suffragists.

For most of the 19th century, suffragists didn’t incorporate visuals in their movement. It was only during the early 20th century that suffragists started to realize that, as Glenda Tinnin, one of the organizers of the National American Woman Suffrage Association, argued, “An idea that is driven home to the mind through the eye, produces a more striking and lasting impression than any that goes through the ear.”

Becoming aware of the way visuals could shift public opinion, suffragists began to incorporate media and publicity tactics into their campaign, using all kinds of spectacles to popularize their cause. Color played a crucial role in these efforts, especially during public demonstrations such as pageants and parades. 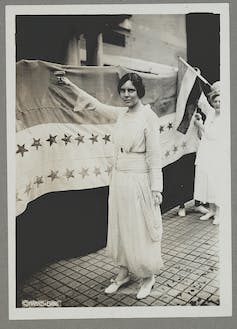 Suffragist Alice Paul dons a white dress and raises a glass shortly after the passage of the 19th Amendment in 1920.
Library of Congress

Part of their goal was to convey that they were not devilish Amazons set to destroy gender hierarchies, as some of their critics claimed. Rather, suffragists sought to present an image of themselves as beautiful and skilled women who would bring civility to politics and cleanse the system of corruption.

Suffragists deployed white to convey these messages, but they also turned to a much more diverse palette.

The 1913 Washington, D.C. parade was the first national event that put the cause of the suffragists on front pages of newspapers around the country. Organizers used an intricate color scheme to create an impression of harmony and order. Marchers were divided by professions, countries and states, and each group adopted a distinct color. Social workers wore dark blue, educators and students wore green, writers wore white and purple, and artists wore pale rose.

Being the media-savvy women that they were, suffragists realized that it wasn’t enough to create an appealing impression of themselves. They also needed to come up with a recognizable brand. Inspired by the British suffragettes and their campaign colors – purple, white and green – the National Woman’s Party also adopted a set of three colors: purple, white and golden yellow.

They replaced green with yellow to pay tribute to Susan B. Anthony and Elizabeth Cady Stanton, who used the sunflower – Kansas’s state flower – when they campaigned for a failed statewide suffrage referendum in 1867. 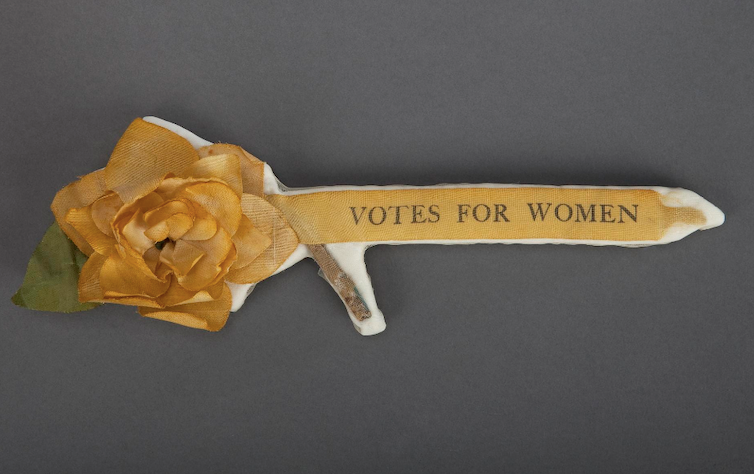 The sunflower was first used during an 1867 campaign for a Kansas state suffrage referendum that failed.
Library of Congress

These American suffrage colors – purple, white and yellow – stood for loyalty, purity and hope, respectively. And while all three of them were used during parades, it was the brightness of the white that left the biggest impression.

In images of suffragists marching in formation, their bright clothing contrasts sharply with the crowds of men in dark-colored suits who line the sidewalks. 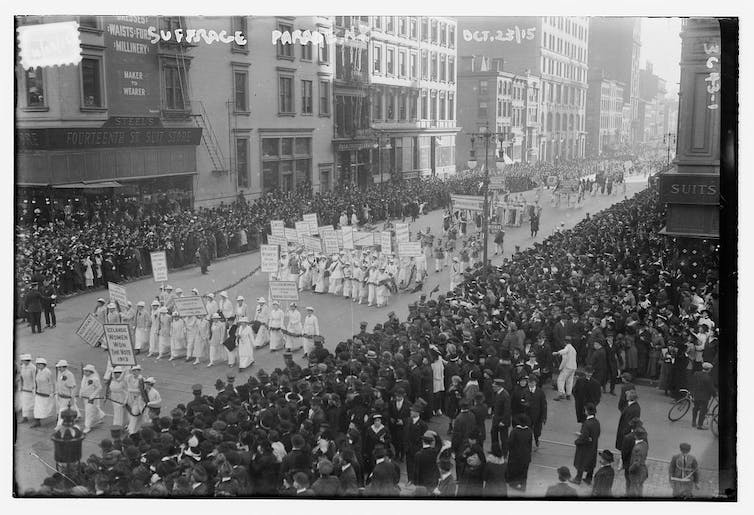 During parades, the white garments of the marchers contrasted sharply with the onlookers lining the sidewalk.
Library of Congress

This visual contrast – between women and men, bright and dark, order and disorder – conveyed hope and possibility: How might women improve politics if they get the right to vote?

White dresses were also easier and cheaper to attain than colored ones. A poorer or middle-class woman could show her support for suffrage by wearing an ordinary white dress and adding a purple or yellow accessory. The association of white with the idea of sexual and moral purity was also a useful way for suffragists to refute negative stereotypes that portrayed them as masculine or sexually deviant.

Black suffragists, in particular, capitalized on the association of white with moral purity. By wearing white, black suffragists showed they, too, were honorable women – a position they were long deprived of in public discourse.

Beyond the struggle for the vote, black women would deploy white. During the 1917 silent parade to protest lynching and racial discrimination, they wore white.

As much as white made a powerful statement, it was the combination of the colors – and the qualities that each represented – that reflect the true scope and symbolism of the suffrage movement.

The next time a female politician wants to use fashion to celebrate the legacy of the suffrage movement, it might be a good idea to not just emphasize their moral purity, but to also bring attention to their loyalty to the cause and, more importantly, their hope.

White is a great gesture. But it can be even better if there’s a dash of purple and yellow.