It's illegal to force someone to vote against their preferences, or to prevent or discourage them from voting at all. 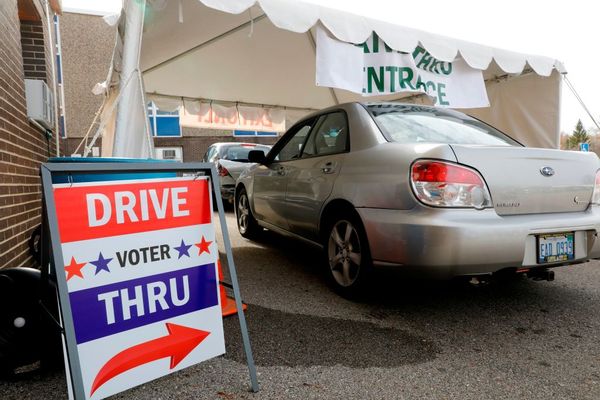 Every election cycle, voting rights advocates and elections officials urge people to keep a watchful eye out for nefarious schemes by partisan groups to pressure people into voting against their preferences or not vote at all.

That type of illegal conduct, a form of voter suppression, can take many forms — including online and in-person at polling locations on Election Day. Below is a guide to identifying such crimes, some of which are punishable by fines or prison time, and how to report offenses while at the polls.

What Is the Legal Definition of Voter Intimidation?

First, a lesson in semantics. An "election crime" is an umbrella term to cover a range of illegal activities regarding voting or campaigning. One category of election crimes covers civil rights violations — when groups or individuals attempt to intimidate voters into casting ballots against their initial selections or sitting out an election.

Federal statutes make it illegal for any person or group to intimidate, threaten, or coerce someone into voting for a candidate "solely or in part for the purpose of electing" that politician, as well as prohibit bad actors from forcing people into abstain from voting in certain races or registering to vote against their will. One chapter within Title 18 of the U.S. criminal code, for example, makes such crimes punishable by fines and/or at least one year in prison.

Per an analysis of federal laws prohibiting voter intimidation by Georgetown University's Institute for Constitutional Advocacy and Protection:

The right of each voter to cast his or her ballot free from intimidation or coercion is a foundational principle of a free and democratic society. [...]

Multiple federal statutes make it a crime to intimidate voters: it is illegal to intimidate, threaten, or coerce a person, or attempt to do so, "for the purpose of interfering with" that person's right "to vote or to vote as he may choose." 18 U.S.C. § 594. It is also a crime to knowingly and willfully intimidate, threaten, or coerce any person, or attempt to do so, for "registering to vote, or voting," or for "urging or aiding" anyone to vote or register to vote. 52 U.S.C. § 20511(1). And it is a crime to "by force or threat of force" willfully injure, intimidate, or interfere with any person because he or she is voting or has voted or "in order to intimidate" anyone from voting. 18 U.S.C. § 245(b)(1)(A).[...]

Legal terms aside, voters' emotions are part of the equation to determine if, or to what extent, they're facing intimidation at the polls or while casting their ballots at home.

The U.S. Justice Department has defined voter intimidation as any behavior or scheme that tries to pursued voters to vote against their preferences, or to sit out a particular race, "by placing them in fear of losing something of value," according to a 2017 analysis of election offenses. "The feared loss might be something tangible, such as money or economic benefits, or intangible, such as liberty or safety," the commission concluded.

What Are Some Examples of Voter Intimidation?

First, we'll point you to the Southern Poverty Law Center (SPLC), a nonprofit legal advocacy organization that monitors extremist organizations, which makes clear that this illegal conduct at polling places is rare and has historically targeted marginalized communities throughout the decades.

In the 2020 presidential race, specifically, the center said "the danger is real" that the criminal activity takes the form of far-right extremists, militias, or other armed vigilantes threatening voters at polling locations on Nov. 3, adding the following rationale as to why the election is different from others:

Far-right extremists are taking to heart Trump's assertion that the election will be 'the most rigged election in history' – an unfounded claim that has nevertheless been widely promoted by right-wing media. Trump has urged his supporters to "go to the polls and watch very carefully." His campaign has even convened an 'army' of his most fervent supporters to surveil polling places. Trump has refused to commit to a peaceful transfer of power, and one of his top communication officials, Michael Caputo, warned, 'When Donald Trump refuses to stand down at the inauguration, the shooting will begin.'

Someone opening fire at a polling location or threatening voters with a deadly weapon would be extreme examples of voter intimidation. Similarly blatant was a case in New Jersey in 1981, when a group of off-duty sheriff's deputies and police officers patrolled predominately Black and Latino polling places on Election Day under the guise of a made-up "National Ballot Security Task Force," the New York Times reported. Elections experts remember that incident for its brashness and a clear-cut example of attempting to intimidate minority voters.

Another high-profile example: During the presidential race, prosecutors charged two right-wing political operatives, Jack Burkman and Jacob Wohl, with felonies including voter intimidation in connection to a robocall scheme that falsely warned the names of mail-in voters would be placed in a database used for tracking outstanding warrants and debt.

But more often than not, cases of voter intimidation on Election Day are not so cut-and-dry, largely because local and state laws outlining such offenses vary. "It is gray," said Justin Levitt, an election law expert at Loyola Law School in Los Angeles, in The New York Times. "The intent to keep people away from the polls is impermissible. But there's some difference between what might make people uncomfortable and activity undertaken to keep people away."

The U.S. Justice Department's 2017 analysis defines voter intimidation as "amorphous and largely subjective." The analysis by the Georgetown institute also said such crimes are often subtle and "context-dependent," including the following behaviors at polling sites as broad examples:

Disrupting voting lines or blocking the entrance to the polling place

Harassing voters, aggressively questioning them about their qualifications to vote

Are Guns Illegal at Polling Places?

No, not necessarily. It depends where you live.

According to the Giffords Law Center, a legal organization that aims to eliminate gun violence, six states and the District of Columbia prohibit carrying a gun or other deadly weapon to polls. Other states ban concealed firearms but do not explicitly restrict people from openly carrying a handgun or rifle.

That said, other rules may prohibit guns at polls on a case-by-case basis. For example, if elections officials are hosting a poll on school property, where federal law preemptively bans firearms, people would risk arrest if they brought a gun to vote.

Nonetheless, the federal laws prohibiting voter intimidation described above make it illegal for anyone to use a gun to threaten a voter, per the Georgetown institute. It concluded:

"Even where guns are not explicitly prohibited, they may not be used to intimidate voters. Nor may armed groups of individuals patrol polling locations or otherwise engage in activities reserved for law enforcement or official state militias."

What Is Legal Conduct at Polling Sites?

No law prohibits someone from asking who you voted for.

State laws allow some forms of "poll watching" or "election observing" by means of which people can legally monitor the voting process at polling places and report what they see to political party leaders. In many states, those "poll monitors" must be trained and certified by a political party or candidate and carry certain credentials. (A state-by-state break down of poll-watching guidelines from the National Association of Secretaries of State, is available here.)

Additionally, according to the FBI, you can give people rides to vote, offer them stamps to mail ballots, or run campaign activities nearby polling sites without committing federal election crimes — though state laws may prohibit such behavior.

What Should You Do If You Witness a Suspected Election Crime?

If you fear for your safety at polls on Election Day, call 911.

Notify election officials about what you saw or experienced; They are obligated to prevent intimidation and unauthorized challenges to your right to vote, according to SPLC.

You can also call 866-OUR-VOTE (866-687-8683) — a lawyer-run, nonpartisan voter-rights hotline — to talk to a volunteer who's trained to investigate potential voter fraud or can assist you in non-English languages.

Per USA.gov, a federally-run website, you can also contact your local FBI office or U.S. attorney's office, or fill out this online form.

Lieberman, Michael.   "Protect Your Vote: What To Do If You See Voter Intimidation At The Polls."    Southern Poverty Law Center.   23 October 2020.

This report was updated on Nov. 3, 2020, to correctly identify from where the 2017 analysis of election offenses was from: the U.S. Justice Department.