A network of Facebook pages with names like Blacks for Trump and Catholics for Trump disappeared after a 2019 Snopes investigation. They returned just weeks before Election Day. 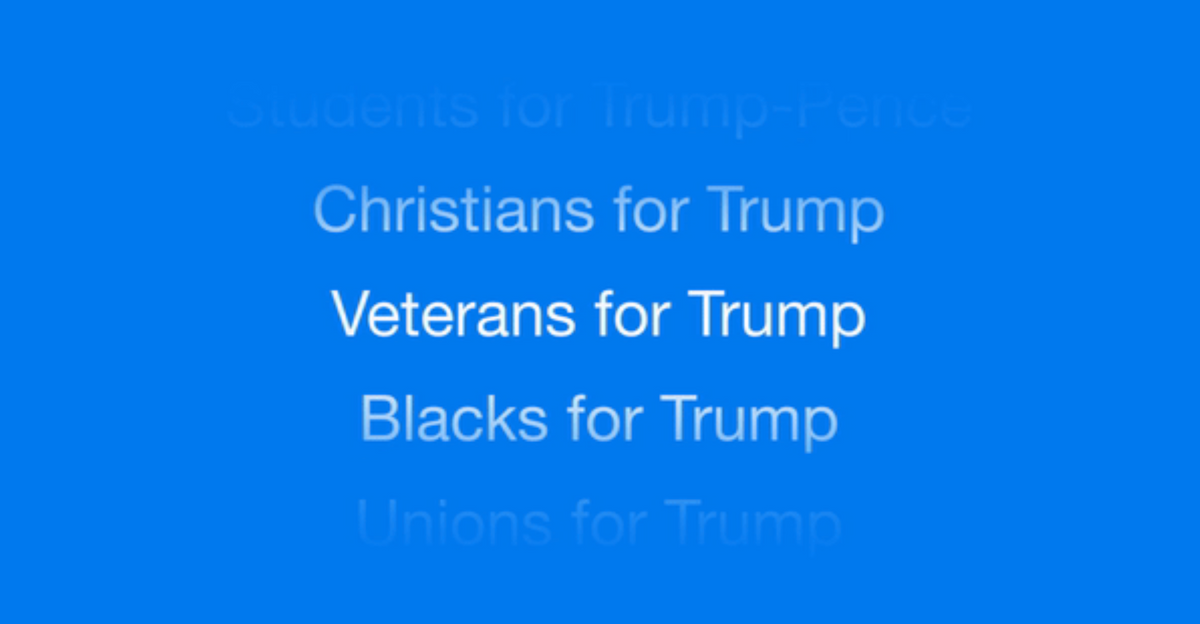 On May 15, 2019, Snopes published an investigation into a network of over 20 Facebook pages that pushed "overtly Islamophobic, conspiratorial content" and painted "extreme, divisive right-wing rhetoric as having broad American support." Our investigation revealed that these pages, with names like Jews & Christians for America and Blacks for Trump, were all actually run by evangelical activist Kelly Monroe Kullberg and her family.

Nine days after our story, the Kullberg Network went dark.

The Kullberg Network effectively acted as an astroturfing campaign that supported U.S. President Donald Trump — i.e.  one that fabricates or exaggerates grassroots support — pushed by a small clique of evangelical activists. The posts shared across this network had included unhinged Islamophobic claims including suggestions that the survivors of the Stoneland Douglas High School massacre were on a “leftist-Islamic payroll” and that Islamic refugee resettlement is “cultural destruction and subjugation.” Commenters on these pages had at times embraced the prospect of violence against Muslim U.S. congresswomen. In an email to The Columbus Dispatch after the Kullberg Network pages disappeared, Kullberg apologized for "any errors in posting" and stated that “the goal of this work is to discern truth and the nature of love in relation to the challenging issues of our times.”

The PAC's purpose is to "find undecided Evangelical Christian voters (especially in swing states) and help them see why they should vote for President Trump." The strategic redeployment of these political pages directly before an election closes the door on a mystery posed in our original investigation: It was Kullberg herself — not Facebook — that removed the pages in May 2019.

The "Freedom Through Truth" Network

Some of the Facebook pages in the original Kullberg Network that represent organizations Kullberg created or managed — things like the American Association of Evangelicals and Christians for a Sustainable Economy — returned earlier this year. These pages appear largely unchanged, and do not show any evidence of a shift in ownership or control.

The recently reactivated Facebook pages that are now operated by Freedom Through Truth PAC, however, are those that were formerly operated under the grouping "Christians for Trump" in 2019. At the time, those pages were operated by a now defunct South Carolina-based PAC named Liberty T that had been funded in part by Ben Carson ally William Millis. These reactivated Freedom Through Truth Facebook pages include:

In the grand scheme of political operations, the scale of this PACs work appears to be minimal based on the fairly low engagement within the network. While Freedom Through Truth has paid Facebook to promote posts from some of these groups, they have never spent more than 100 dollars on any of their few ad buys. The paid ads, thus far, largely rehash debunked claims linking Democratic presidential nominee Joe Biden to corruption, antifa, or George Soros. For example: As was the case in its previous iteration, the content posted on the Freedom Through Truth Network is also coordinated. The same posts often appear as a burst across multiple pages in the network: as shown here:

Despite being funded by a PAC whose name exalts the liberating potential of truth, the content posted to these pages often falls far short of being accurate. For example, a recent post shared by the page Blacks for Trump is a recently debunked meme alleging that gas prices above $5 per gallon were the norm when Joe Biden was Vice President.

Who Is Jeremy Story?

Because Freedom Through Truth PAC was registered with the FEC very recently, there is limited public information about the people who operate or fund it. The only information available suggests that Story is its treasurer. Story, an alternate Trump delegate for Trump at the 2016 Republican National Convention, is president of a group called "Campus Renewal" whose aim is to "create and catalyze united movements that transform college campuses for Christ." Story ran unsuccessfully for political office on two occasions. In 2016, he ran for a board of trustees seat for the Austin Community College District on a platform that embraced abstinence-only sex education. In 2018, he ran for a seat in the Texas House of Representatives. In a video shared in the group Catholics for Trump, Story billed the 2020 election as a choice between "low taxes and freedom" or "a future of lockdowns," and encouraged his followers to "share our posts … on this page with your friends" in swing states.

We do not know who besides Story is involved in Freedom Through Truth PACs work, but we do know that he is not the only individual involved in its operation. In a recent post on the Catholics for Trump page, Story explained that he was "one of" the administrators for that group. In his introductory video, Story made reference to the PAC's "coordinating team."

The notion that Kullberg is entirely uninvolved with the Kullberg Network's reemergence is belied somewhat by the fact that memes shared by Freedom Through Truth PAC pages have also appeared on pages like Kullberg's Christians for a Sustainable Economy at roughly the same time. Story and Kullberg are not strangers to each other, either: Story signed a 2016 statement released by Kullberg's American Association of Evangelicals that was authored and signed by Kullberg. Though the content appears less inflammatory currently, the purpose of the network appears largely unchanged.

When we first reported on the Kullberg Network, Facebook did not answer our questions about potential hate speech violations, or if Facebook considered the network's behavior an example of "coordinated inauthentic behavior," which is a violation of Facebook's terms of service loosely defined as "groups of pages or people working together to mislead others about who they are or what they’re doing." Facebook does not comment on or confirm their removal of individual pages, so we did not know who took down the pages or why.

It now seems clear that Facebook did not act on the Kullberg Network in 2019. Instead, it allowed these groups — built in part by the power of inflammatory memes and conspiracy theories  — to be preserved offline by Kullberg for future use. Unsurprisingly, that future use ended up being a push to get evangelicals to the polls to vote for Trump on Nov. 3, 2020. With such a long history, however, there is no guarantee this election will be the Kullberg Network's final cause.