When Did Trump Test Positive for COVID-19? Speculation Swirls 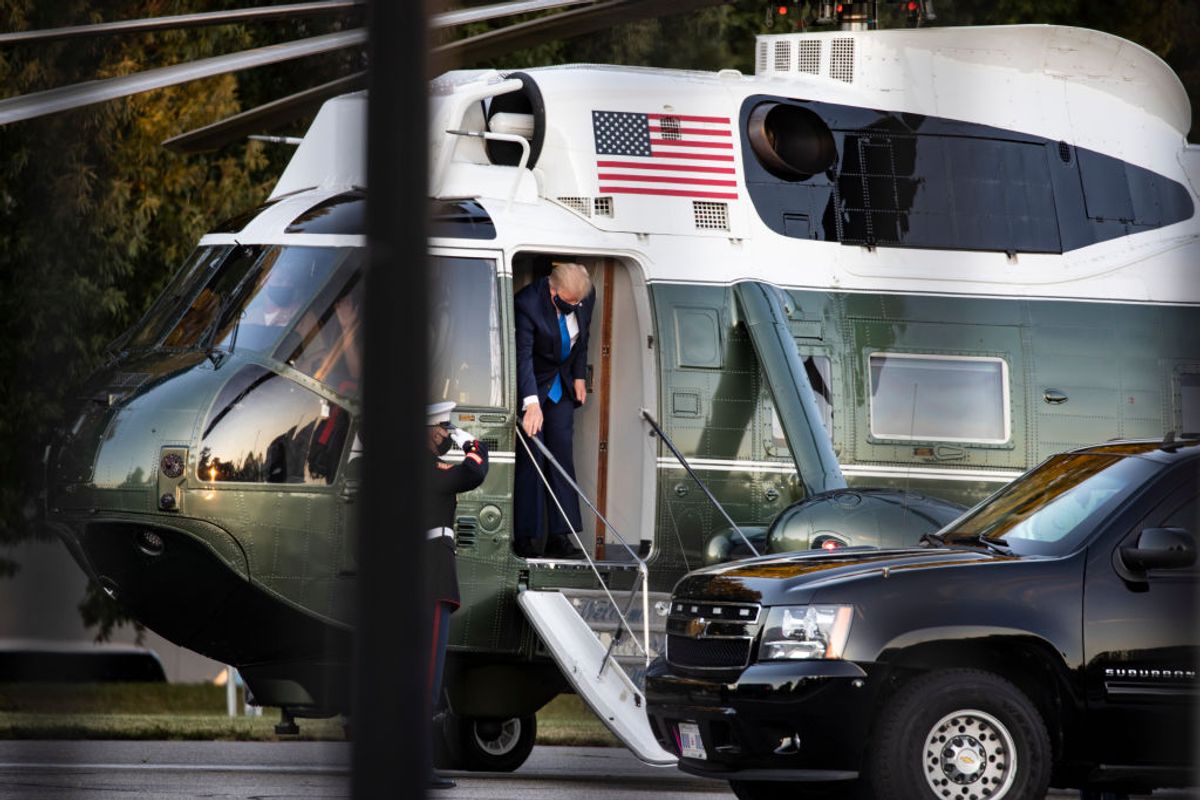 U.S. President Donald Trump posted a message to social media just before midnight on Thursday, Oct. 1, 2020, announcing that he and first lady Melania Trump had tested posted for COVID-19:

Emerging from the White House residence at 6:16 p.m. ET for his first public appearance since announcing ... earlier he had tested positive for coronavirus, Trump walked under his own power to his waiting helicopter and displayed no major outward signs of illness.

Trump’s COVID-19 diagnosis announcement came shortly after the public learned that Hope Hicks, one of Trump’s closest aides, had also tested positive for coronavirus. As a growing number of politicians, including U.S. senators Mike Lee and Thom Tillis, former White House counselor Kellyanne Conway, and former New Jersey Gov. Chris Christie, tested positive, questions swirled over where, when, and how the disease became so widespread at the White House.

The public first learned of Trump’s diagnosis in the waning hours of Oct. 1, but Dr. Sean Conley, who is treating Trump at Walter Reed, said during a news conference on Saturday, Oct. 3, that the president first tested positive for COVID-19 "72 hours ago," which would be Wednesday, Sept. 30, about 36 hours before the public was alerted.

Dr. Brian Garibaldi also stated during this news conference that Trump received a "special antibody therapy directed against the coronavirus" about "48 hours ago," which would imply that the president was administered the medication on Thursday morning.

Shortly after the news conference, Conley released a memo attempting to clarify the timeline, though seemed to add more confusion. Conley said that he "misspoke" when he said "72 hours ago," and that he should have said he was referring to "day 3" of Trump's illness, suggesting he was including all of Thursday as day 1. Similarly, Conley said that he made the same mistake when he said "forty eight hours" ago for therapy treatment instead of "day two." According to Conley’s memo, Trump was indeed diagnosed on Thursday evening:

The President was first diagnosed with COVID-19 on the evening of Thursday, October 1st and had received Regeron's antibody cocktail on Friday, October 2nd.

Conley's memo states that he misspoke twice during his news conference. However, while Conley may have misspoke in saying "72 hours" instead of "3 days," it was an entirely different doctor, Garibaldi, who said that Trump was administered an antibody therapy "48 hours" ago.

Reporters also noted that Regeneron was misspelled "Regeron" in Conley's memo. A spokesperson for the company also released a statement saying that Conley's memo was incorrect to call what the president had received as "polyclonal antibodies." The spokesperson told CBS News reporter Sara Cook that "it is two monoclonal antibodies. It was incorrect in the physician's letter."

If these problems can also be dismissed as simple errors — that Conley truly did misspeak in saying "72 hours" instead of "3 days" and that a separate doctor misspoke and said "48 hours" instead of "two days"  — that would mean Trump was diagnosed with the COVID-19 coronavirus on the evening of Thursday, Oct. 1, 2020, and, after digesting the news, informed the American people about his diagnosis just before midnight that same night.

However, if Conley’s original timeline was accurate, that would mean that Trump was diagnosed around midday on Wednesday. And if that's true, that would mean Trump attended at least two events, a rally and a fundraiser, after learning of his positive diagnosis.

Derek Thompson, a writer for The Atlantic, shared the following timeline: