BLMManifesto.com appears intended to damage and discredit the wider movement against racial injustice and police brutality. 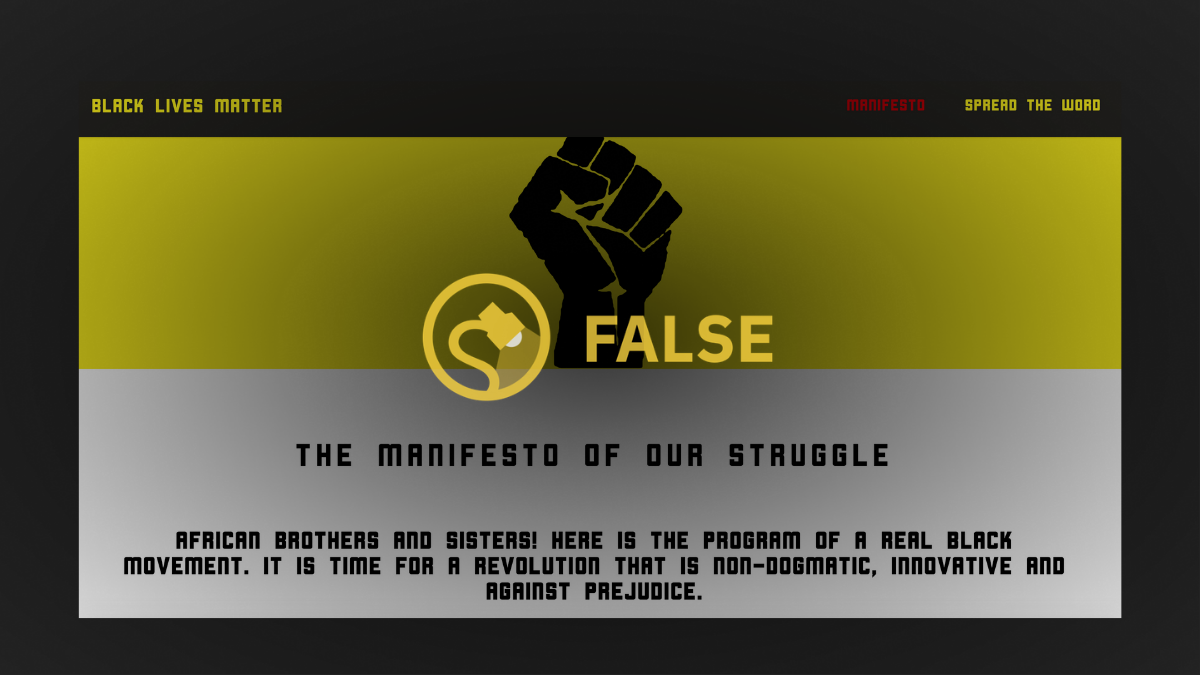 In the early autumn of 2020, social media users critical of the movement for racial justice known as Black Lives Matter (BLM) began posting links to a website, BLMManifesto.com, that claimed to feature the BLM manifesto.

"Everyone should be deeply concerned," one Facebook user wrote in a group dedicated to opposing Michigan's Democratic Gov. Gretchen Whitmer. "If you have not read the manifesto of BLM, you need to. This is what our governor is supporting." Another user replied: "Oh my, it is an eye opening read! To think this [crap] is supported by Democrats. Nov. 3 head to your physical polling place ..."

On Aug. 5, 2020, another Facebook user posted a link to the website, adding "If you take the time to read it, the violations of the US Constitution are blatant," to which someone else replied: "This [manifesto] looks more like it's coming from the Islamic [Muslim] terrorists trying to impose their sharia law [on] all the Americans..."

BLMManifesto.com features a black, white, and yellow color scheme, with a raised fist symbol — which has been used as a symbol of "unity and solidarity", the BLM movement, and as a symbol of "Black power" — displayed prominently on the homepage, along with the following description:

"THE MANIFESTO OF OUR STRUGGLE

"AFRICAN BROTHERS AND SISTERS! HERE IS THE PROGRAM OF A REAL BLACK MOVEMENT. IT IS TIME FOR A REVOLUTION THAT IS NON-DOGMATIC, INNOVATIVE AND AGAINST PREJUDICE." Some of its more eye-catching proposals include: abolishing the legislative and judicial branches of government; giving full voting rights and eligibility to hold office to immigrants living in the U.S. illegally; nationalization of all transport industries; reduction of the retirement age to 55 years; nationalization of weapons and ammunitions manufacturing; the seizure and redistribution of taxes, profits from military contracts, and assets owned by religious institutions, as reparations to the descendants of slaves and to indigenous Americans.

Far from being an authentic set of proposals associated with the BLM movement, the text was actually almost entirely taken from the Fascist Manifesto of 1919, and tweaked in order to give the appearance of relating to racial injustice. The following graphics show each section of the fake "BLM Manifesto" side-by-side with the corresponding section from "The Manifesto of the Italian Fasci of Combat," published in Mussolini's "Il Popolo d'Italia" newspaper, in June 1919: It's not clear who created BLMManifesto.com, or what the motivations were in doing so. The site was first registered in June 2020, and an associated Twitter account was created in July 2020. It has so far published only two tweets. In one, on July 25, the author claimed that the manifesto had been "founded within the CHOP [Capitol Hill Organized Protest] in Seattle." In the second tweet, on Aug. 1, the author tagged two antifascist groups and encouraged protesters against racial injustice and police brutality in Portland, Oregon, writing:

"In regards to the recent withdrawal of federal agents in [Portland], comrades DO NOT STOP FIGHTING! Continue the fight, keep winning! White supremacy cannot be voted out! An equal society cannot be voted in! We can only make the future we want with our own hands."

The fact that the website and Twitter account were both created during the summer of 2020, a period of escalating tensions and widespread protests over racial injustice and police brutality, combined with the earnestness of @BLMManifesto's tweets, suggest that the project is a serious one, intended to damage the wider BLM movement by falsely linking it with policy proposals that are adapted from the manifesto of Mussolini's fascists.

However, it's also possible that BLMManifesto.com is an elaborate act of trolling, a prank, or some kind of experiment. Either way, it's already being used as ammunition in social media debates over the movement against racial injustice and police brutality, and as part of the broader electoral battle in 2020.

BLMManifesto.com.  "The Manifesto of Our Struggle."   Accessed 17 September 2020.