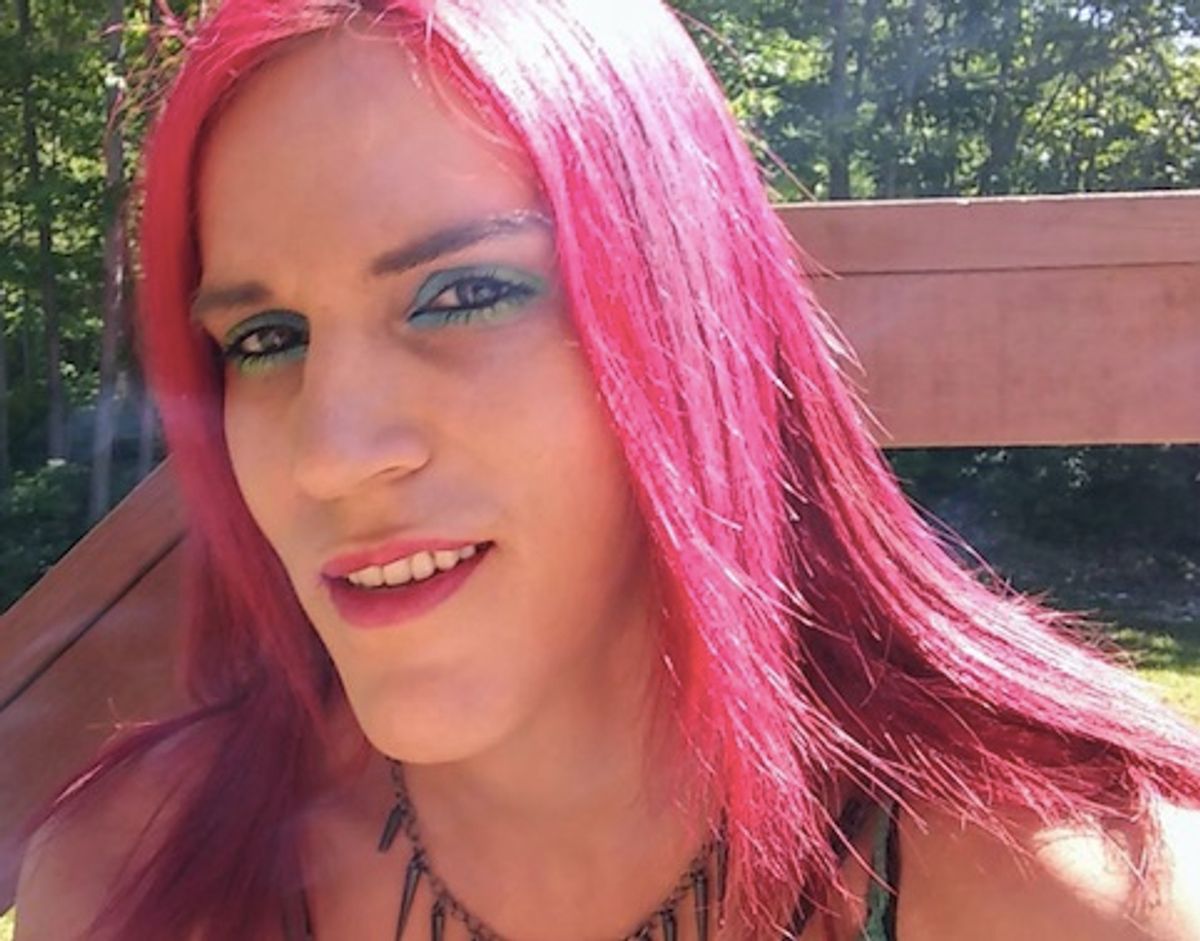 Image Via Courtesy of Aria DiMezzo

It's not the first time Aria DiMezzo has run to be sheriff of Cheshire County, New Hampshire. But it is the first time she's made national news for it.

DiMezzo isn't your typical candidate for sheriff. Her campaign motto is "F--- the police." A transgender woman, she describes herself as a "shemale," a term considered offensive to many in the transgender community, but one which she considers more efficient for communication purposes (fewer words to say, she reasoned). She also describes herself as a libertarian anarchist and a satanist.

And to top it all off, after 4,000 voters cast ballots for her in the primary on Sept. 8, DiMezzo is running as a Republican, opposing Democratic incumbent Eli Rivera.

The story of the unexpected Republican candidate running for sheriff on a "F--- the police" platform went national — then international — after it was picked up by Fox News.

As is often the case with viral stories, readers asked Snopes to verify the facts, and we confirmed with DiMezzo that her run for Cheshire County Sheriff is serious — and she is running to win.

We reached out to Rivera, her opponent, for comment but didn't get a response in time for publication. Holly Shulman, spokesperson for the New Hampshire Democratic Party, said in an email, "Sheriff Rivera is doing an outstanding job and we fully expect that the voters of Cheshire County will continue to support him."

We reached out to the New Hampshire Republican Party and the Republican party of Cheshire County for comment on DiMezzo's campaign and platform, but didn't get a response in time for publication.

DiMezzo said the fact that she ran unopposed in the primary election and will now be on the general election ticket as a Republican in November 2020 points to something else. She believes it reveals many people are likely blindly voting for Republicans or Democrats without knowing anything about the actual candidates.

She's faced backlash, which she attributes to the fact that she's the embodiment of an anti-Republican platform running as a Republican. But she faults voters for failing to find out anything about her before voting for her.

"I’m not an easy person to miss," DiMezzo said. "I'm 6 feet tall. I carry a pistol. I'm trans and I have bright red hair. How did all of those people not know who I am? How did all those people go into a voting booth and vote for someone who they knew nothing about? I was never secretive about who and what I am."

Indeed, DiMezzo's views are clearly displayed on her campaign website, where she shares several criticisms of law enforcement, political parties, and the federal government.

DiMezzo doesn't have any law enforcement experience. ("I have no experience whatsoever committing aggression against non-violent people," as she puts it.) Her current occupation is hosting a talk radio show called "Free Talk Live."

As one might expect, DiMezzo's views on how she would run the sheriff's department are unconventional. The New Hampshire Union Leader reported DiMezzo wouldn't enforce laws associated with what she describes as victimless crimes. She is "opposed to the war on drugs, and does not want to enforce any crimes she claims are victimless, which include drug crimes, sex work, immigration violations, and even speeding violations."

After her story went viral, vandals spray-painted a picture of a penis and a homophobic slur on her car. She didn't call the police to file a hate crime and vandalism report — doing so would have been useless, she said, and in her view, the role of the police is to "police the police."

DiMezzo told the Mindful Skeptics podcast that if she's elected sheriff, Cheshire County deputies would have three choices: hang out in the station, go home, or go out and monitor interactions between police and civilians.

"If you see a cop pull someone over, pull over that cop, ask him why he's harassing peaceful people," she said on the podcast. "And if he continues doing it, place him under arrest."

In a phone interview with Snopes, DiMezzo compared the current job of policing to acting as "road pirates," meaning she views much of what they do as focused on citing the public so the government can collect fines.

DiMezzo also confirmed that she is a satanist — but by that she means she's an atheist. She doesn't believe in, much less worship, any deity.

"Anyone who believes that Lucifer or Satan actually exists, I'm not on board with," she said.

In that way she falls in line with the more prominent satanic organizations in the U.S., namely The Satanic Temple and the Church of Satan, which are atheistic. Their main focus is activism in favor of pluralism, in opposition of what they view as undue influence of Christianity in the U.S. political system and laws.

DiMezzo ran for Cheshire County sheriff as a libertarian in 2018, but this year the longtime Republican candidate Earl Nelson didn't run, offering her the chance to run unopposed as a major-party candidate.

Even if she doesn't win, DiMezzo said she hopes that her run can be a wake-up call that people need to do their research on the candidates they vote for and not simply vote based on party alignment. In 2018, running as a libertarian, DiMezzo only garnered 747 votes, less than a quarter of the votes she received this year. She said she believes the only reason she got so many more in 2020 was because she had an "R" next to her name.

Running on a major party ticket is a "giant middle finger to the entire system," she said. "I think that’s what people like about it. They’re fed up with the system."

DiMezzo said she gets a lot of messages of support, even from people who say they wouldn't vote for her but respect what she's doing.

"Even die-hard Christian conservatives say they don’t agree with me, but they say this needed to be done," she said. "I get people saying they’re going to pray for me, but I don’t consider that hate. I just consider that confusion on their part."

Mail-in ballots in New Hampshire must be received by Nov. 3, 2020, at 5 p.m. Check Snopes' state-by-state vote-by-mail guide for more information.

Update 11/04/2020: As reported by the Keene Sentinel, Aria DiMezzo lost her bid for Cheshire County Sheriff.