The mail-in voting process has several built-in safeguards that together make it hard for one person to vote fraudulently, and even more difficult to commit voter fraud on a scale capable of swinging election outcomes. 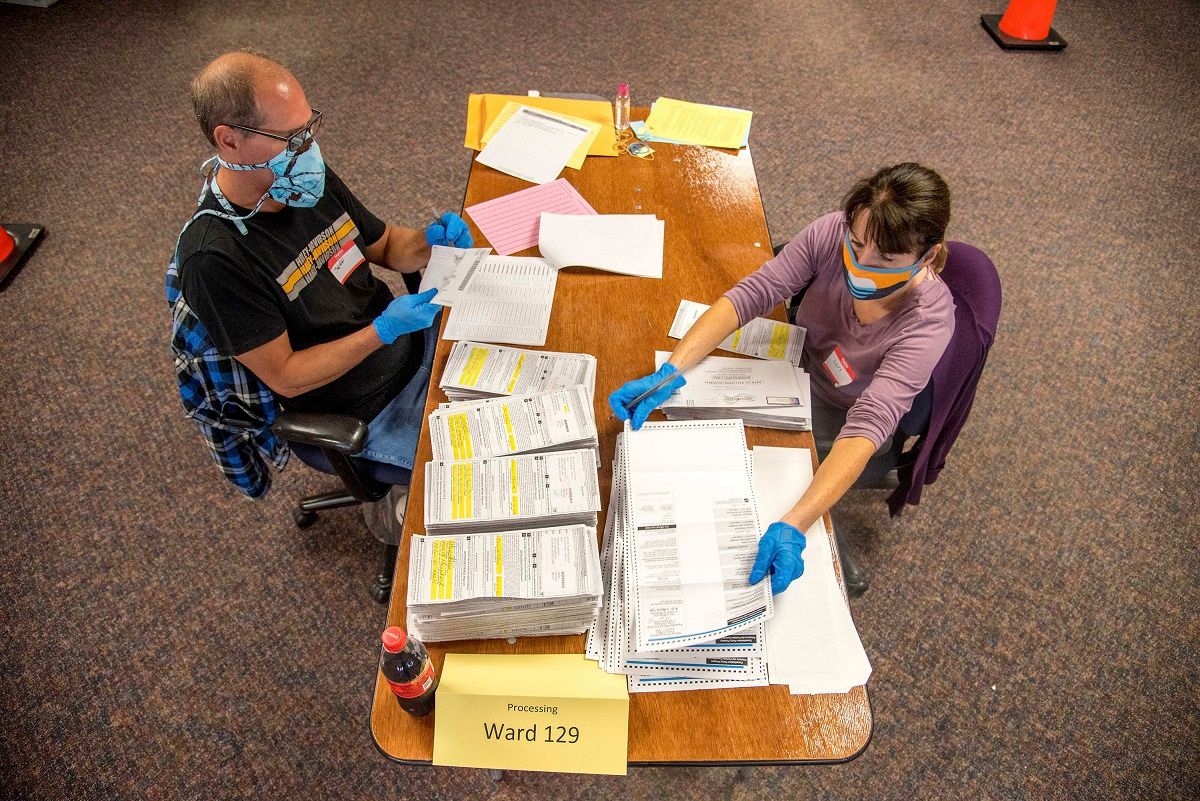 Image Via Will Cioci / Wisconsin Watch via AP

Voter fraud is very rare, whether people vote in person or by mail. That much is clear from a large body of research.

One of us is a political scientist at the University of Washington, and the other is a former elections commissioner who now studies voting laws. We can explain why voter fraud is so rare – especially for mail-in ballots, which have drawn both the interest and concern of many people this year.

The goal, of course, is to make sure that ballots received by mail are legitimate – that they are cast by registered voters, not by others lying about their identity, and that each voter casts only one ballot in a single election. The mail-in voting process has several built-in safeguards that together make it hard for one person to vote fraudulently, and even more difficult to commit voter fraud on a scale capable of swinging election outcomes.

1. Only valid voters can get a ballot in the mail

People don’t get ballots in the mail by accident. Some states mail them to all registered voters automatically – as in Oregon, Washington, Utah, Colorado and Hawaii, which conduct all elections by mail even when there’s not a pandemic. These states mail ballots to eligible voters at the address where their registration form says they live.

In other states, voters have to request a ballot – and it’s not mailed out until an election official has confirmed that the person is an eligible voter.

This is actually a higher standard than in-person voting: In many states, people are allowed to fill out a registration form and cast their ballot at the same time, with their ballot counting only once their registration is formally approved.

2. It is very hard to make fake ballots

Ballots feature particular design elements that are difficult to copy. They are printed on special card stock, with exact page size, color and thickness varying by state, or even county or town.

Marking a choice differs, too, with some places asking voters to “fill in the bubble” while other people must “connect the arrow” or “darken the box.”

The text on ballots is also different from place to place. Presidential candidates may remain constant across the country, but each state has different races for members of Congress, as well as statewide positions like governor or attorney general. And every voting district may have a different choice for state legislatures, court and school positions, local political councils, and even sewer commissioners. Voters may not notice all the little details, but election officials certainly would if they received a ballot that wasn’t quite right. 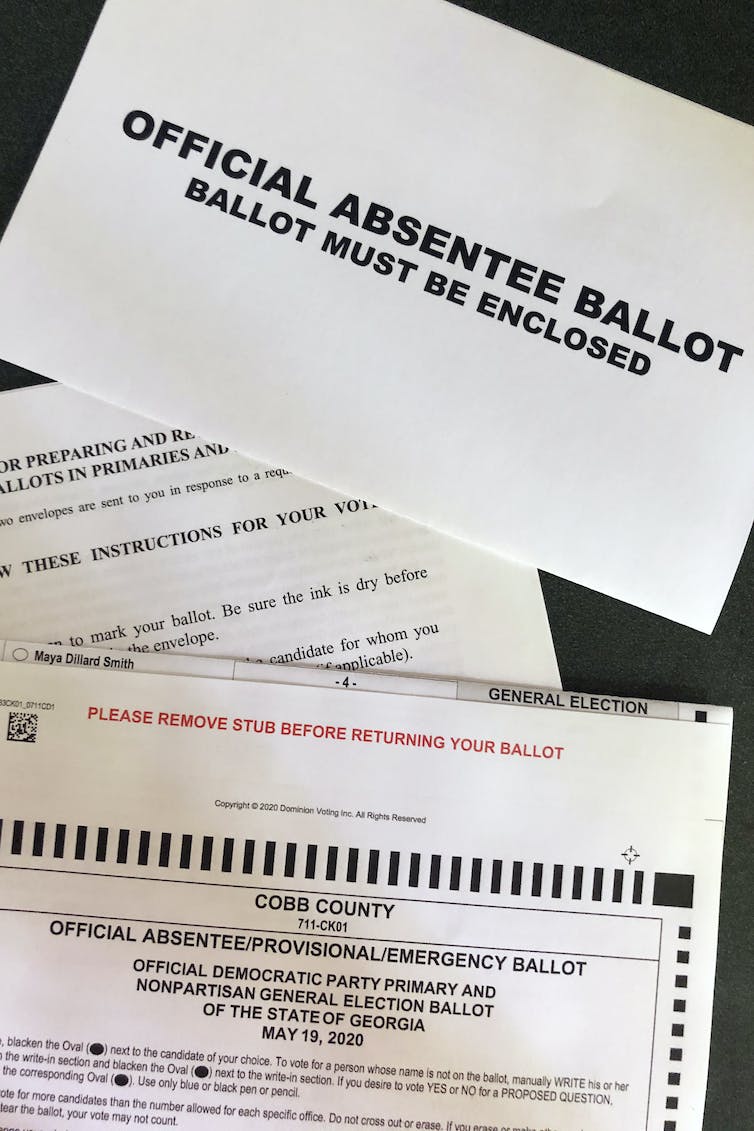 3. Voters must affirm their identity

Every state has a process for verifying that absentee voters – the technical term for people who return ballots by mail rather than in person – really are who they say they are.

In most states, voters must sign the outside of their return envelope. This signature usually cannot deviate significantly from the signature on their original voter registration card, or the ballot will be rejected. If anything, the process of matching these signatures is often too strict, critics say, leading election administrators to unfairly reject authentic votes from registered voters due to slight signature discrepancies.

Some states also require voters to obtain a signature from one or more notaries or witnesses. A few even make voters submit a copy of their official government ID, like a driver’s license.

In general, voters cannot return their absentee ballots in just any old envelope. Rather, the ballots must be returned inside an official government envelope, which is typically mailed directly to voters along with the ballot itself.

Many of these ballot envelopes feature unique bar codes to identify each voter – and to allow voters to track their ballot’s progress through the mail and the counting process.

An outsider who wanted to manufacture and distribute fake ballots on a large enough scale to affect election results would need to do more than duplicate the special envelope and the bar codes. They would also somehow need to prevent the original, authentic envelopes and bar codes from being used. Otherwise, election officials would notice that a unique bar code was being used more than once. 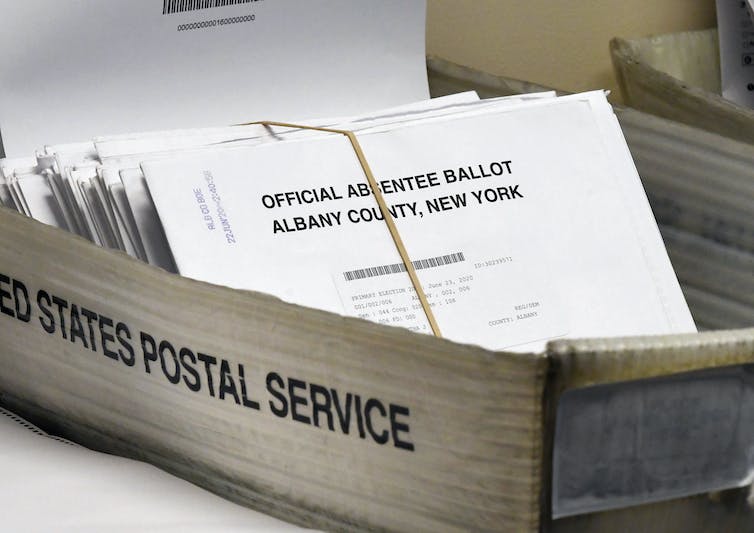 In most states, ballots must be mailed in official envelopes.
AP Photo/Hans Pennink

5. The Postal Service will notice oddities

Anyone hoping to conduct mail-voting fraud would have to avoid detection by not only regular election officials, but also the U.S. Postal Service.

The Postal Service coordinates with state and local election departments to flag any ballots that deviate in even minor ways from typical procedure. For instance, a Texas county commissioner was deemed guilty of voter fraud after post office employees found him improperly returning 56 mail-in ballots completed by other voters.

The agency also has its own police force, the U.S. Postal Inspection Service, which investigates potential crimes that relate to the mail.

6. Voter fraud is a serious federal and state crime

For a federal election, each act of voter fraud can be punished by five years in prison and a US$10,000 fine, plus any additional state penalties.

By contrast, all that work put into attempting fraud would net the perpetrator only a single vote in favor of their preferred candidate. As a report from the Brennan Center for Justice succinctly put it, “That single extra vote is simply not worth the price.”

Voters who choose to vote by mail in November can be confident that their own ballot – and those of their neighbors – will be protected from fraud.