In Pizza We Trust? How Some T-Shirts Got (Falsely) Linked to Pedophilia

The internet continued to serve reheated pizzagate conspiracy theories in 2020. 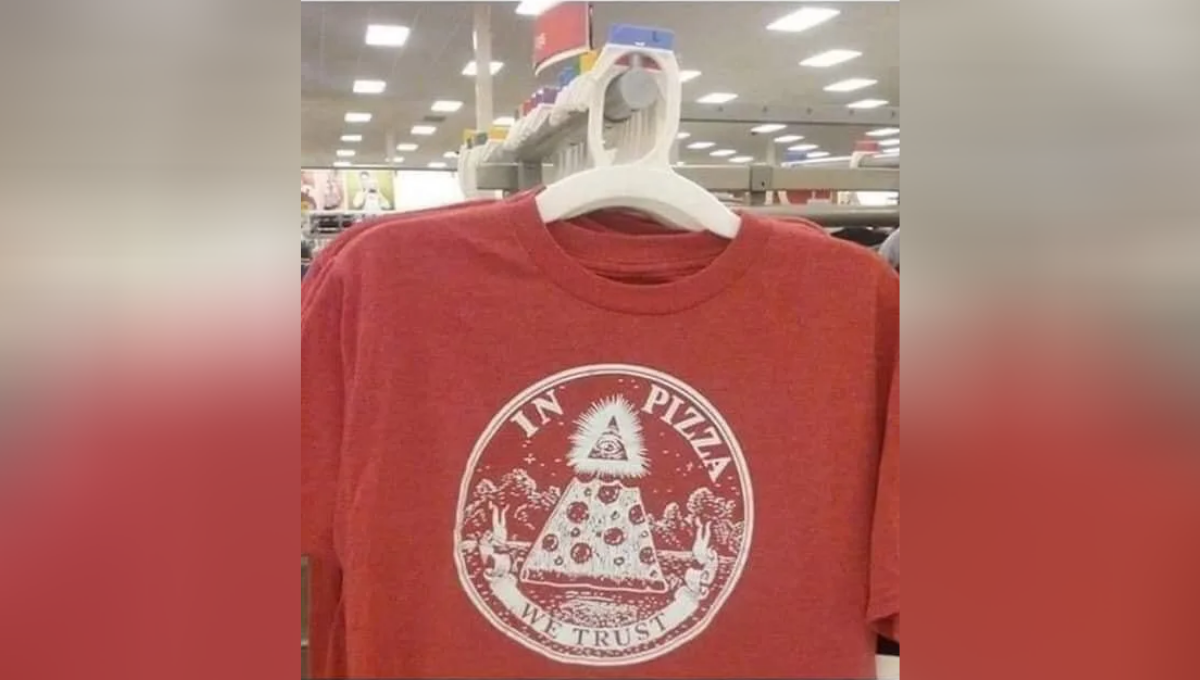 In August 2020, a photograph showing a T-shirt, reportedly being sold at a Target, bearing the slogan "In Pizza We Trust" circulated on social media along with the claim that the department store was endorsing, aiding, encouraging, or was actively participating in pedophilia: This appears to be a genuine photograph, though we have been unable to confirm this item was available at Target stores. A spokesperson for the chain told us the stores "don’t sell this shirt," but it's unclear if it was available in years past (the above-displayed image has been circulating since 2018). Similar items can be found via online retailers.

Regardless of the item's availability at Target, neither the shirt nor the chain store  has been credibly linked to pedophilia.

What Does Pizza Have to Do With Pedophilia?

The meme above states that "most people don't even know that pizza symbolizes pediphilia." While this may be the case, it isn't because they aren't aware of some important, credible information. It's because this claim is nonsense.

The idea that pizza was a code word for pedophilia first sprung up during the 2016 presidential election after the email of John Podesta, the chair of Hillary Clinton's presidential campaign, was hacked by a Russian intelligence agency and published by Wikileaks. As internet users scoured through the illegally obtained material, they noticed some of the emails referred to "pizza."

This was an innocuous detail to most political observers — in one email, Podesta suggests using a pizza oven to cook dinner, in another he suggests buying pizza for political volunteers. But 4Chan users hypothesized that pizza was actually a code word for pedophilia. The evidence? The first letters in the term "cheese pizza" — "C" and "P" — are also the first letters of the words "child pornography." These conspiracy theorists failed to note that the terms chunky potatoes, cool people, crazy pets, Clinton presidency, and conspiratorial perversity also begin with these two letters.

In December 2016, The New York Times dissected the evolution of this repeatedly debunked conspiracy theory:

The already flimsy connection between "child pornography" and "cheese pizza" is stretched even thinner when you consider that the term "cheese pizza" never actually appears in Podesta's emails. While there are a handful of mentions of pizza, these emails never actually mention "cheese pizza." This rumor started in large part because internet users were trying to read between the lines and invented items that they wanted to see.

Journalists have repeatedly debunked pizzagate rumors since they started spreading in the lead-up to the 2016 election. One of the most glaring errors and obvious indications that this conspiracy theory was practically conjured out of thin air had to do with the claim that a sex trafficking ring was being run out of the basement of a pizza parlor in Washington, D.C., that had no basement. Alex Jones, the face of the conspiratorial website InfoWars, even apologized for his part in spreading these false rumors. Still, this theory continued to gain traction on social media as it was absorbed into "Qanon," a wide-ranging and unfounded conspiracy theory of dubious origins holding that there's a "deep state" plot against U.S. President Donald Trump.

The QAnon conspiracy picked up where Pizzagate left off, alleging that the liberal elite’s pedophile ring extends way beyond one restaurant and that it is only a matter of time before Trump arrests Podesta, Clinton, and other Democratic power brokers for their crimes. All of this was fueled by an anonymous internet poster dubbed Q, who claims to be a government insider.

In Pizza We Trust

While pizza's conspiratorial links to pedophilia are relatively new, the slogan "In Pizza We Trust" whirled around for decades. For example, here's a 1986 coupon from a pizza parlor in California: The arcade and restaurant chain Chuck E. Cheese also used the slogan on game tokens in the 1980s. The slogan has appeared on a wide range of merchandise, such as Teenage Mutant Ninja Turtles T-shirts and designer handbags. Pizza parlors from New York to France to South Africa to Oklahoma have also used this slogan. In other words, the slogan has been used for decades without issue.

Of course, "In Pizza We Trust" was not the only punny pizza slogan to get caught up in this conspiracy. Similar rumors were also circulated about shirts bearing slogans such as "Wanna Pizza Me?" a play on the tough guy phrase, "Do you want a piece of me?" as illustrated in the following outtake video from "Seinfeld":

Claims that these T-shirts are in anyway related to pedophilia are based solely on the fact that they include the word "pizza." But this train of thought quickly derails when you consider the fact that pizza is one of the most popular foods in the world.

The Eye of Providence

According to these conspiratorial claims, the slogan "In Pizza We Trust" isn't the only supposedly suspicious item on the aforementioned T-shirt. The item also includes the Eye of Providence, otherwise known as the "all-seeing eye," which is a symbol that has been used by various groups dating back centuries. In the conspiratorial context, this symbol is often associated with the "Illuminati," a shadowy group of global elites whose globe-controlling puppet strings are much longer in lore than in life.

While the inclusion of this ominous symbol, a slice of pizza, and the slogan "In Pizza We Trust" may signal to some that Target is involved in a sex trafficking scheme, a much simpler explanation is at hand. The T-shirt design is spoofing the design on the back of an American dollar bill and making a punny point about how at least pizza is something that everyone can have faith in. Instead of "In God We Trust," the slogan reads "In Pizza We Trust." Instead of a pyramid — which Charles Thomson, who presented the Great Seal to Congress in 1782, said symbolized "strength and duration" — it's a slice of pepperoni pizza. The all-seeing eye appears on the pizza slogan because that's how it appears on the dollar bill:

The Motivated Perceptions of Moral Panics

The United States (as well as the rest of the world) has seen several moral panics over the years. In the 1970s, for instance, parents worried their children's Halloween candy was being spiked with drugs or laced with razor blades. While this fear continues to this day, scant evidence exists that this was ever a genuine problem.

While these moral panics typically involve overblown fears and unnecessarily exaggerated reactions, they often run parallel to genuine real-world concerns. The pizzagate narrative, for instance, took off around the same time that convicted sex offender Jeffrey Epstein, a billionaire financier with high-profile connections, was arrested on sex trafficking charges. Conspiracy theorists, however, pick and choose which parts of reality they incorporate into their narrative. Yes, a wealthy businessman with high-profile connections was allegedly involved with a sex trafficking ring. No, there's no evidence that "pizza" was ever used to orchestrate these crimes.

As fact and fiction blur into one, some people just can't help seeing "evidence" wherever they look. The "pizzagate" rumors started, in large part, because conspiracy theorists wanted to find something damning in Podesta's emails. When they encountered mundane emails about ordering pizzas for volunteers, they saw salacious invitations for satanic rituals.

These illogical leaps continued long after these egregious accusations bore no fruit and, as of this writing, appear to be growing more common. In the summer of 2020, multiple companies have had to issue statements or change business strategies as a growing community of conspiracy theorists turned the faintest hints of suspicion into trending topics. An overpriced cabinet became "proof" that Wayfair was trafficking children. A poorly thought out bottom button became "proof" that Hasbro was grooming children for pedophilia. And a punny pizza shirt became proof that Target was involved with a sex trafficking scheme.

As was the case with the origins of the pizzagate rumors, no evidence exists to support any of these accusations.

Sebastian, Michael and Gabrielle Bruney.   "Years After Being Debunked, Interest in Pizzagate Is Rising—Again."     Esquire.   24 July 2020.